Accessibility links
Flies In Danger Escape With Safety Dance High-speed cameras reveal that flies perform an elegant little ballet with their legs. In less than a 10th of a second, flies perceive the direction of the threat and use their legs to angle their bodies for the quickest escape route. 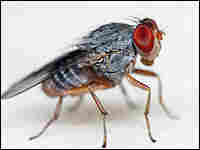 High-speed cameras reveal that fruit flies perform an elegant little ballet with their legs to get the speediest takeoff. iStockphoto.com hide caption

See a series of slow-motion views of the various takeoff maneuvers flies perform to get away from danger fast.

You may think you know how to swat a fly, but Michael Dickinson's work could teach you a thing or two.

Dickinson used superslow-motion video cameras to study how a fly avoids getting swatted. First, he and his graduate student Gwyneth Card coaxed the fly to stand on a glass prism anchored to the middle of a small moat. The prism let him see the fly from below and the side simultaneously.

Then, he moved a kind of mini fly swatter toward the fly and recorded how the fly reacted.

Dickinson says a fly will typically jump off the surface and then begin to fly away from the swatter. But the high-speed cameras revealed something amazing about what happened before the fly jumped.

"They perform an elegant little ballet with their legs," says Dickinson. "They move their legs around to reposition their bodies so that when they do jump, they will push themselves away from the looming threat."

That ballet appears to give them a critical edge in escaping the swatter.

Dickinson says what's remarkable about this body position is how fast it happens. In less than a 10th of a second, the fly has to perceive the threat using its eyes, determine what direction it's coming from, and then make the appropriate movement with its legs so it jumps in the right direction. And all this is accomplished by a brain that's the size of a poppy seed.

So what are the lessons for swatting flies?

"You shouldn't swat where you see them," says Dickinson. "You should anticipate that they're going to jump away from you. So you should extend your swat in the direction of the fly's anticipated motion."

Of course, that assumes you want to swat the fly. Dickinson rarely does.

"When you see a fly flitting around your hair, or your potato salad, you might see an annoyance," he says. "But in my lab you really see a marvelous machine, arguably the most sophisticated flying device on the planet."