Accessibility links
Inside The Art Of Political Speech Writing Barack Obama has the chance to set a new standard for speech making when he accepts the Democratic nomination tonight. Will he? And what goes into crafting a memorable political speech? NPR's Tony Cox asks three political writing pros.

Barack Obama has the chance to set a new standard for speech making when he accepts the Democratic nomination tonight. But just what goes into crafting a memorable political speech?

NPR's Tony Cox asks Susan Estrich, professor of law and political science at the University of Southern California and the former manager of Michael Dukakis' 1988 presidential campaign; Chriss Winston, the first woman to head the speech writing staff at the White House; and Charlton McIllwain, assistant professor of culture and communication at New York University. 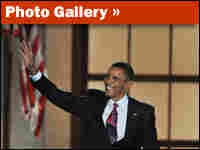 Slideshow: Day 4 of the Democratic Convention 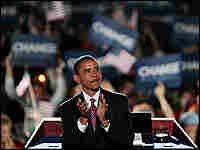 Barack Obama claps along with the crowd during his acceptance speech at the Democratic National Convention in Denver. Win McNamee/Getty Images hide caption 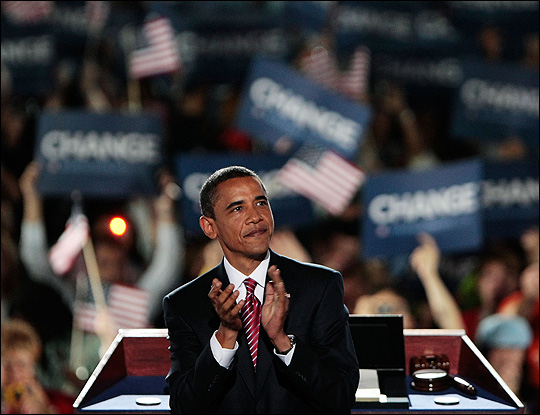 Barack Obama claps along with the crowd during his acceptance speech at the Democratic National Convention in Denver.

Read transcripts and hear audio from some of Thursday night's key speeches: 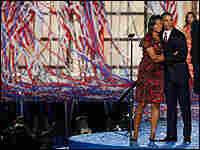 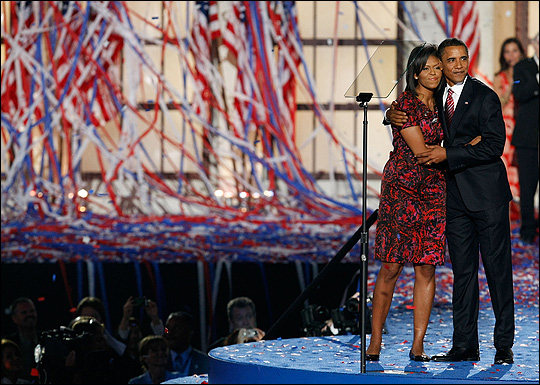 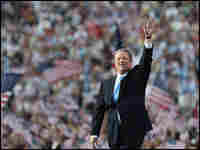 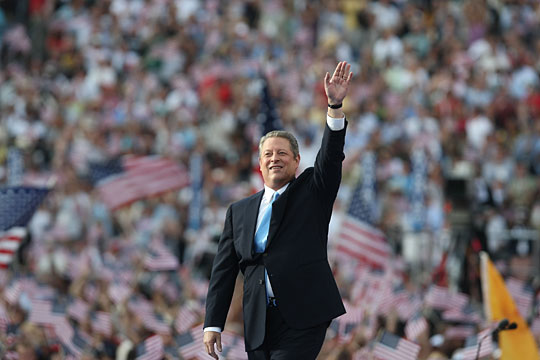 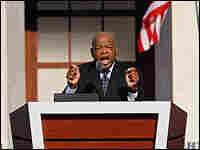 Georgia Rep. John Lewis introduced a tribute to Martin Luther King Jr. on Thursday. Lewis, who was at the March on Washington, said that "this dream was too right, too necessary, too noble to ever die." Mark Wilson/Getty Images hide caption 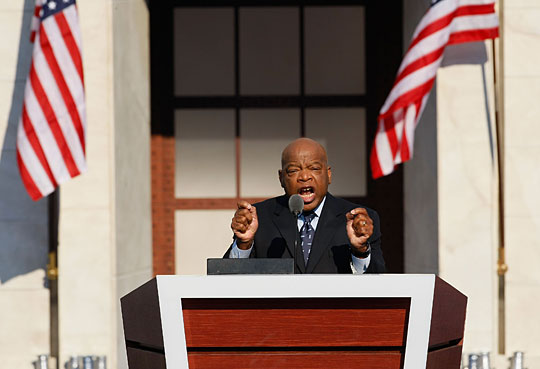 Georgia Rep. John Lewis introduced a tribute to Martin Luther King Jr. on Thursday. Lewis, who was at the March on Washington, said that "this dream was too right, too necessary, too noble to ever die." 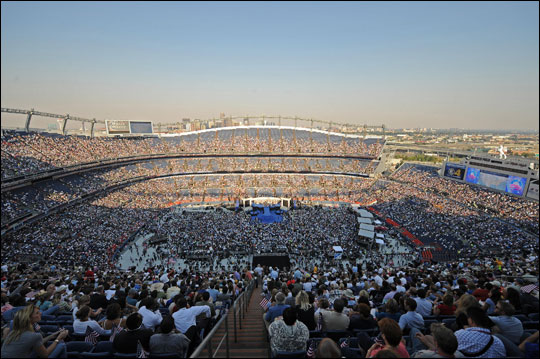 Sen. Barack Obama accepted the Democratic Party's presidential nomination Thursday with "profound gratitude and great humility." The historic moment was witnessed by a packed football stadium in Denver and an audience of millions watching and listening at home.

Speaking for some 45 minutes, Obama said his Republican opponent, Sen. John McCain, "doesn't get it." He responded to criticisms of his celebrity and outlined a list of programs he would enact, all with the soaring oratory for which he is known.

Obama said the nation was at a defining moment, "a moment when our nation is at war, our economy is in turmoil and the American promise has been threatened once more."

He blamed "the broken politics in Washington and the failed policies of George W. Bush. "America, we are better than these last eight years," he said. "We are a better country than this."

Obama thanked his rival for the nomination, New York Sen. Hillary Clinton, whom he called "a champion for working Americans and an inspiration to my daughters and to yours." Obama also praised former President Bill Clinton, saying he had made the case for change Wednesday night "as only he can make it."

It was a celebratory atmosphere at Invesco Field, near downtown Denver. Convention delegates and Obama supporters filed into the 75,000-seat stadium throughout the afternoon and sat under the sun, listening to musicians including Stevie Wonder, will.i.am and Sheryl Crowe. Volunteers signed up unregistered voters, and vendors did a brisk business in Obama T-shirts and pins.

Obama was preceded to the stage by former Vice President Al Gore, who narrowly lost the 2000 race to President Bush. Gore said he knew something about close elections and said the 2000 election was close "because defenders of the status quo are desperately afraid of the change Barack Obama represents."

Speaking from a podium built over the football field, Obama outlined a list of proposals, answering calls for specific plans to address the ailing economy. Countering charges from the McCain camp, Obama emphasized he would "cut taxes for 95 percent of all working families. Because in an economy like this, the last thing we should do is raise taxes on the middle class."

For the sake of the economy, he said, he would "set a clear goal as president: In 10 years, we will finally end our dependence on oil from the Middle East." However, he did not explain how.

Much of Obama's speech was devoted to taking on his Republican opponent. He said McCain "doesn't get it."

Attempting to tie McCain to unpopular President George W. Bush, Obama said that next week, at the Republican convention in St. Paul, the "same party that brought you two terms of George Bush and Dick Cheney will ask this country for a third. And we are here because we love this country too much to let the next four years look like the last eight. On Nov. 4, we must stand up and say: "Eight is enough."

Obama served up tough talk on national security issues. He said McCain "stands alone in his stubborn refusal to end" what he called the "misguided war" in Iraq.

"If John McCain wants to have a debate about who has the temperament, and judgment, to serve as the next commander in chief," Obama said, "that's a debate I'm ready to have."

'America, We Cannot Turn Back'

The historic nature of Obama's candidacy, the first African-American to receive a major party's presidential nomination, was a theme of the night.

Obama, the son of a white Kansan mother and a black Kenyan father, delivered his acceptance speech on the 45th anniversary of the Rev. Martin Luther King Jr.'s "I Have a Dream" speech, in which the civil rights leader outlined his vision for a colorblind society.

Rep. John Lewis of Georgia, the only person still alive of those who spoke with King that day, told the crowd, "With the nomination of Sen. Barack Obama tonight, the man who will lead the Democratic Party in its march toward the White House, we are making a down payment on the fulfillment of that dream."

Obama referenced the "Dream" speech, calling King a young preacher from Georgia: " 'We cannot walk alone,' the preacher cried. 'And as we walk, we must make the pledge that we shall always march ahead. We cannot turn back.' "

"America, we cannot turn back," Obama said. "Not with so much work to be done. Not with so many children to educate, and so many veterans to care for. Not with an economy to fix and cities to rebuild and farms to save. Not with so many families to protect and so many lives to mend. America, we cannot turn back. We cannot walk alone. At this moment, in this election, we must pledge once more to march into the future. Let us keep that promise — that American promise — and in the words of Scripture hold firmly, without wavering, to the hope that we confess."

After the speech, Obama was joined on the podium by his wife, Michelle, his two young daughters, his running mate, Joe Biden, and Biden's family.

Confetti rained down, and the sky was lit up with fireworks.

The Democratic ticket will campaign over the next three days in the key swing states of Michigan, Ohio and Pennsylvania.

McCain, meanwhile, has a rally scheduled Friday in Dayton, Ohio, in which he is expected to announce his running mate. McCain appeared in a TV ad Thursday night in which he congratulated Obama on his nomination.

"Sen. Obama, this is truly a good day for America. Too often the achievements of our opponents go unnoticed. So I wanted to stop and say, 'Congratulations,' " McCain says in the ad.

"How perfect that your nomination would come on this historic day. Tomorrow, we'll be back at it. But tonight, senator, job well done."