Accessibility links
Up Next: Transnistria? A separatist enclave in Moldova could be the next place Russia will try to assert its control over the former Soviet republics. 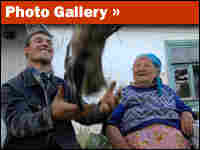 View a photo gallery of life in Transnistria. 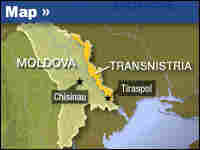 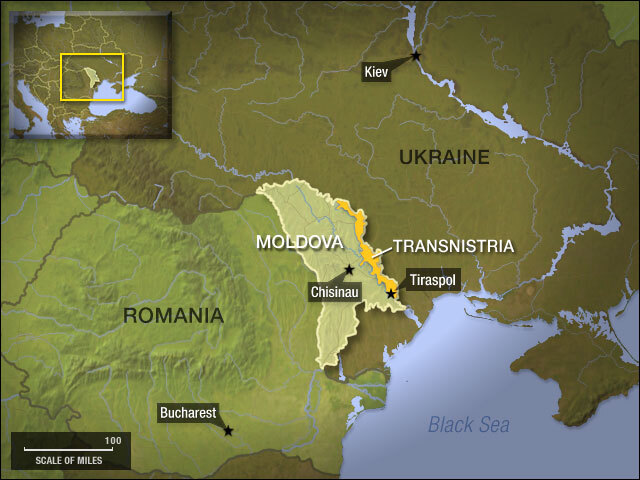 Whoever heard of South Ossetia before it became the starting point for Russia's reassertion of its dominance over Georgia?

It was an obscure ethnic pocket left over from the dissolution of the Soviet Union, troublesome mainly because its citizens identified more with Russia than with the newly emerging Georgian republic.

It wasn't the only one.

Ethnic separatists also occupied a prime strip of Georgia's Black Sea coast called Abkhazia. Now that both areas have formally declared their independence and gotten recognition from Moscow, European officials are worried that Russia could use other frozen ethnic conflicts to put pressure on Moldova and Ukraine.

French Foreign Minister Bernard Kouchner noted that Russia could use areas such as Transnistria in Moldova to create tension and counter efforts to bring those countries into NATO and the EU.

It may sound like one of those fictional Eastern European countries, Ruritania or Graustark, but it's a real place, part of Moldova, sandwiched along the border with Ukraine. It doesn't quite reach the Black Sea but mostly follows the eastern shore of one the region's great rivers, the Dnester.

Whether Transnistria is a country is a matter of dispute. For now, at least, no country in the world recognizes it.

In many ways, Transnistria appears to be most like the Georgian enclaves in that separatists there fought a brief war of independence with help from the former Soviet army and have remained autonomous ever since. The fighting took place in 1991, when ethnic Russians won several bloody skirmishes with the Moldovans along the Dnester River.

The uprising was led by Igor Smirnov, a bushy-browed former Soviet apparatchik who was later elected president, an office he has held ever since.

As it has done in Georgia, although Russia signed international agreements to withdraw from Moldovan territory in 1993, it kept its forces in Transnistria.

A Museum Of Soviet Times

The Lonely Planet Guide to Moldova describes Transnistria — which has several different spellings — as an inhospitable place. "Indeed, if the Transdniestr border guards didn't have a vested financial interest (bribes) in allowing visitors to pass, the area would probably be inaccessible to all but the most determined of souls." The article goes on to say that the area's main attraction is as a living museum of life in Soviet times.

The separatists' English-language Web site, www.pridnestrovie.net, entices surfers to learn "Ten things you didn't know about Europe's newest country" and informs visitors that the preferred name of the entity is the Russian-language "Pridnestrovie."

It notes that the elongated region, which follows the Dnester River for more than 100 miles, is slightly smaller than Delaware but nearly twice as big as Luxembourg. It occupies about 10 percent of Moldova's land mass, but the Web site brags that Transnistria produces the equivalent of 40 percent of Moldova's gross national product.

That's difficult to confirm, but the Moldovan government asserts that much of what Transnistria earns is ill-gotten gains, in the form of smuggling and money-laundering. Moldovan President Vladimir Voronin has called the leadership of Transnistria "a transnational criminal group." In 2005, he claimed that Transnistrian front businesses were laundering about $2 billion a year, presumably from Russia.

One of the biggest profit centers, say inspectors from the European Union, is chicken parts, smuggled across the borders into both Moldova and Ukraine.

The Pridnestrovie Web site tackles those allegations head-on, in an article on President Smirnov. It says "his sons, Vladimir and Oleg, have repeatedly been accused by Moldovan state propaganda of being involved in everything from drugs trafficking to weapons smuggling and running the nation's largest companies as well as the government's customs organization mafia-style. There is no basis to these accusations."

The separatist government also is defended by a well-produced online newspaper, The Tiraspol Times. The two-year-old English-language paper is edited by an Irish publisher, Des Grant, and its funding is undisclosed, prompting criticism that it's part of a campaign to promote Transnistria's independence.

The Moldovan government has been criticized by freedom-of-the-press groups for trying to crack down on The Tirapol Times by passing a ban on news media that promote separatism.

For now at least, Russia is promoting a plan that could keep Transnistria as a nominal part of a federated Republic of Moldova.

Transnistria would get the right to hold a referendum and decide whether it would choose federation or independence. If it did choose to be part of Moldova, it would have a right to veto any Moldovan domestic or international policies that might run counter to its interests.

The Transnistrians already held a referendum, in 2006, in which they chose independence. Moldova has already rejected a previous version of the Russian plan, arguing that even if Transnistria chose federation, Moldova would be saddled with a rogue region over which it had no control.