Accessibility links
Sarah Palin, A Fresh Face For The GOP Sarah Palin is no stranger to the "maverick" label often assigned to Sen. John McCain. Alaska's youngest and first female governor has pushed for ethics investigations of fellow Republicans in her state and bucked the powerful oil industry on a major natural gas pipeline project. 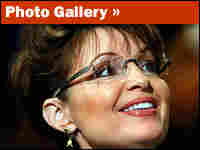 Palin: "I believe that for the most part Republicans are united in the desire to see the domestic supplies of energy tapped."

Palin: "To me it's nonsensical that we're not allowed to tap into them still."

Palin: "Problems with the Republican Party of late."

Palin: "I want to make sure we have a good government."

An Outsider In Alaska

"Well, I really want people to say, 'Yeah, the risk was worth it in giving an outsider a shot.'"

From The NPR.org Archives

"The recently elected governor of Alaska is 44, the mother of five, and a former state champ in high school basketball. She is truly mediagenic, strongly pro-life and full of spunk. But can McCain say Obama lacks experience but that Sarah Palin is ready to be a heartbeat away? Can he turn over Dick Cheney's office to someone whose only previous office was mayor of Wasilla?"

Sarah Palin is no stranger to the "maverick" label often assigned to Sen. John McCain, the Republican presidential candidate who has selected her to join him on the GOP ticket. Alaska's youngest and first female governor has pushed for ethics investigations of fellow Republicans in her state and bucked the powerful oil industry on a major natural gas pipeline project.

When she ran for governor in 2006, she ran as an outsider and an agent for change. But she's also an anti-abortion, pro-gun fiscal conservative — something sure to please the Republican base.

The 44-year-old Palin is a fresh face on the national political scene. But she has participated in local and state politics for much of her adult life. She was elected to the Wasilla City Council in 1992, running against tax increases in the Anchorage suburb. Four years later, she was elected mayor of the city, which has grown rapidly although its population is still under 10,000. Palin held the mayor's job until 2002 and in 2003 was named chairwoman of the Alaska Oil and Gas Conservation Commission.

Palin was elected governor three years later despite her outcast status in the Republican Party. Her campaign theme was a defiant one — "Take a Stand." She won a three-way primary race against incumbent Gov. Frank Murkowski and former state Sen. John Binkley, then went on to defeat former Democratic Gov. Tony Knowles.

As governor, Palin says she's tried to instill public confidence in the government of a state that's been shaken by political scandals. She won't invite lobbyists to her office and has introduced ethics reform legislation. One of her first acts as governor was to kill the now infamous "bridge to nowhere" pork-barrel spending project. And she put the former governor's personal jet up for sale on eBay.

In an interview with NPR soon after taking office as governor, Palin said her outsider status had pros and cons. "The kind of a disadvantage of being an outsider is you don't know all the players. The advantages are you get to start fresh. You get to start with ideals, and it's worth it."

Palin continues to defy her party. She refused to endorse longtime Republican Congressman Don Young in this year's primary, backing one of his challengers instead. But critics say that Palin is politically naive and more show than substance. In recent weeks she's been dogged by questions over her firing of a state official who refused to dismiss a state trooper involved in a bitter divorce and child custody battle with her sister.

Palin graduated from the University of Idaho in 1987 and worked for two years as a television sports reporter before becoming a co-owner of a commercial fishing operation. She's also owned an outdoor recreational equipment company. Palin was crowned Miss Wasilla in 1984 and also competed in the Miss Alaska pageant. She likes to hunt, ice fish, ride snowmobiles and eat moose burgers.

'Barracuda' On The Basketball Court

Palin also played basketball in school. She was on the Wasilla state championship girls basketball team in 1982. Her nickname on the court was "Sarah Barracuda," for her style of play.

Palin is the mother of five children, including one born earlier this year with Down syndrome. Her oldest son enlisted in the Army last year and is scheduled to be deployed to Iraq next month.

David Welna and Cathy Shaw contributed to this report.