Accessibility links
For White-Water Guides, The Thrill Is Never Gone The Grand Canyon's rafting season is ending, after giving thousands of visitors one-of-a-kind memories. The guides that take them downriver are like larger-than-life superheroes. And that can be hard to walk away from.

Listen
For White-Water Guides, The Thrill Is Never Gone 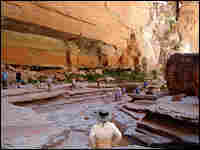 Passengers explore National Canyon, one of the Grand Canyon's many shady side canyons, which are perfect for some "alone time" — or a nap. Courtesy of Matt Fahey hide caption 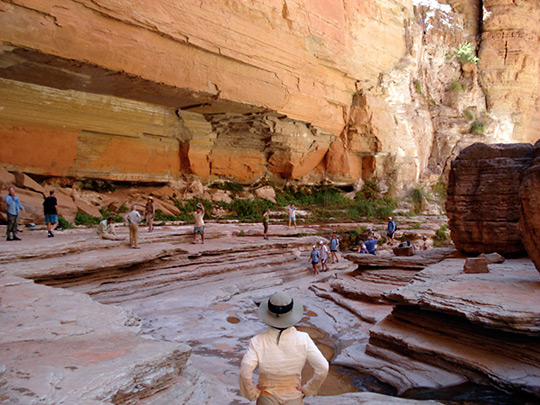 Passengers explore National Canyon, one of the Grand Canyon's many shady side canyons, which are perfect for some "alone time" — or a nap. 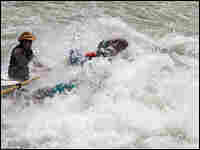 Guide Michael Whalen grins ear to ear as he punches through one of the Grand Canyon's huge rapids. Courtesy of Lynda Apple hide caption 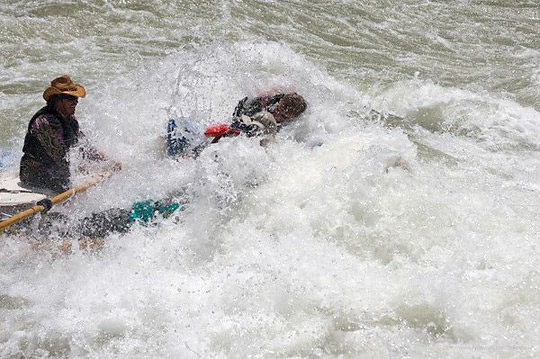 Guide Michael Whalen grins ear to ear as he punches through one of the Grand Canyon's huge rapids.

For Love Of The River

Bob Parker came to Flagstaff, Ariz., to be a river guide in the 1970s. A few years ago, he left guiding to study nursing at Northern Arizona University in Flagstaff.

This song was recorded in the studios of Arizona Public Radio in Flagstaff. 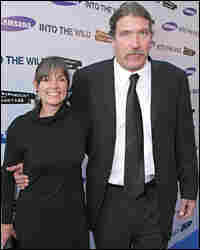 Brian Dierker attended the premiere of Into the Wild with his wife, Jen, on Sept. 18, 2007. Alberto E. Rodriguez/Getty Imgages hide caption 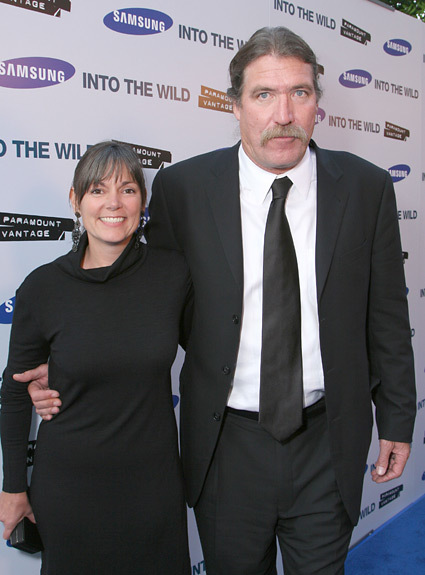 Brian Dierker attended the premiere of Into the Wild with his wife, Jen, on Sept. 18, 2007. 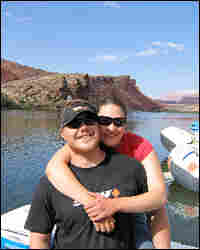 A Day At The Office: Newlywed river guides Scott and Emily Perry. Courtesy of the Perrys hide caption

toggle caption
Courtesy of the Perrys

The stretch of the Colorado River running through the Grand Canyon has one of the longest runs of white-water rapids in the world.

There are almost 300 miles of river, with enormous rapids that can shift in intensity from day to day, and even from hour to hour.

This year, more than 20,000 people will take a once-in-a-lifetime trip through the Grand Canyon. And the boatmen and women who guide them down the river are considered larger-than-life superheroes.

"If you're scared, they're gonna be scared," says longtime river guide Michael Whalen, "so you have to project this image, like, 'This is fun, you're gonna be a totally changed person by the end of this trip' — and they have no idea what we're talking about."

Guides like Whalen are trained in white-water rescue, boat operations and wilderness first aid. They can fix anything that breaks and prepare three meals a day for their passengers — often in sweltering heat or violent monsoon storms. That doesn't bother Whalen.

"It's one of the coolest jobs I've ever been able to do," Whalen says. "You're away from all outside influence. You don't have any cell phone. You're not plugged in anywhere. It's just as exciting as heck to be able to do this."

Born To Be A River Guide

At 26, Emily Perry has been a guide for eight years. Her father was a Grand Canyon river guide. She grew up hearing him and his river buddies tell stories in the living room at night as she was going to sleep.

"He always told my sister and I [that] he'd take us down the Colorado River for the first time when we were 7 years old," Perry says.

"I remember when I was 7, he asked if I was ready, and I said, 'No Dad, I'm not ready for Crystal Rapid.' And he's going, how the heck does she know about Crystal? It was from lying in bed and listening to all these stories going on in the living room."

Crystal, the deadliest rapid in the Grand Canyon, is legendary, with huge water holes and drop-offs. Guides say Crystal has the "Maytag Effect." If you get stuck in it, you spin around and around until it decides to spit you out.

Perry's husband, Scott, is also a river guide; that's how they met. Married since last year, the Perrys are unusual for guides. They work full-time, guiding tourists during the summer, and federal researchers the rest of the year. Sometimes they don't see each other for weeks. River guiding is hard on relationships.

"Scott calls himself a career boatman, a lifer," Perry says. "But I want kids someday. I want a job with full benefits," she says. Scott says he wants that, too. But they love their work, and for now, it pays the bills.

A River Full Of Characters

Scott Perry's uncle is Brian Dierker, who has been a guide for almost four decades. Dierker, 6 feet 5 inches tall, with hands the size of shovels, also runs a company that helps moviemakers film rafting and boating scenes.

He worked on 1994's The River Wild,, with Meryl Streep, as well as last year's Into The Wild, directed by Sean Penn. His film credit lists him as the marine coordinator, but Dierker also landed a significant acting role in the film.

He plays Rainey, a middle-aged, long-haired hippie with some of the funniest lines in the movie. It was Dierker's acting debut.

Coping With The Off-Season

Dierker knows he's lucky. Most river guides only work a few months out of the year. There is no health insurance, although the pay is much better than it used to be. Some guides take on a cash-only lifestyle, free of debt.

In the off season, they work as teachers, ski instructors or snow-cat drivers — or, they just wait until the next season rolls around.

And months of waiting in the off-season can be filled with melancholy for some river guides.

Over 10 years ago, a beloved guide, Curtis Hansen, committed suicide at the end of the season. That wasn't the first suicide for the community, and it wouldn't be the last.

Hansen's nickname was "The Whale," because of his size. The community got together and formed The Whale Foundation in his honor.

The organization offers counseling to guides, money for education scholarships and some medical support. Once a year, there's a big benefit called The Wing Ding, which also celebrates the Grand Canyon river community.

"You're a guide in the summer," says benefit organizer Robbie Pitagora. "You're everything to a lot of people. People look up to you.

"And the season ends. Their self-esteem seems to drop. There's not somebody everyday to pat 'em on the back. We started to think that maybe we could do something that would help our community."

Bob Grusy, another organizer and veteran guide, says there's really no other life for him. But it's hard, he says — both financially and personally.

"I would go back to our family farm in Illinois and help with the harvest," Grusy says.

"During lunch one day, I was just staring out the back door, and my mother said, 'Where do you go when you get that stare on your face?' And I try to explain to her, 'Mom, I just spent the summer taking people hiking, showing off the Grand Canyon, saving people's lives. And now I'm just sitting here.'"

"We're commercial river guides," he says. "We take people down the river, we make it possible for these people to do the things that they would never dream of doing in their life.

"We take people to the edge, and we hold onto them as they look over, and then we pull 'em back again."

Guide Emily Perry knows the draw of the canyon well. And it's not just the thrill of the big waves.

"It's so beautiful," she says.

"The way the light plays on the canyon. And there's something about the running water — the way it sounds and changes. I think that's what draws me back."

Memories Of A Canyon River Cook

I have had the great fortune of going on more than 50 rafting trips on the Colorado River through the Grand Canyon. But, I'm no boatman — I'm far too chicken for that. I can barely muster enough courage to row myself through some of those rapids, let alone a boatload of paying customers. So, generally, my job on the river has been that of camp cook.

Being able to cook well is certainly a bonus — but in my opinion, it's not as important as being able to cook successfully. Making three meals a day for at least 20 people is no small feat. Especially when your kitchen moves downriver every day and you're using coolers and 20 ml ammunition cans for refrigeration and storage.

There are no Quickie-Marts in the Grand Canyon, so supplies for three weeks of cooking have to come with you from the start. I don't know how much it all weighs, but I'm guessing it's a few thousand pounds.

And, yes, you lift all of it at one time or another, carrying it from boat to kitchen several times a day. I once used a pedometer to clock how much walking I did in a given day of cooking and it was about 5 miles.

Cooking on the river starts early. I usually have my first cup of coffee at 4 a.m. To some people, this might sound torturous; it certainly can be. But I have learned to enjoy the solitude. Camp is quiet, and the canyon is filled with its own sound: the river moving, the breeze blowing and the Canyon Wren's morning chorus.

When John Wesley Powell first navigated the rapids of the Colorado River in 1869, he nearly starved to death from his meager diet of coffee, bacon grease and whiskey.

Modern river-runners have no such concern, as food has become a major selling point for commercial river trips on the Colorado.

Companies not only advertise two weeks of adventure and excitement, but three gourmet meals a day, as well. The menu below is a sample of food that would have made John Wesley Powell drool. The one thing that hasn't changed since his time is the availability of whiskey.

... And In Between:
Each boat also carries a veritable candy store, where passengers can snack on Skittles, Snickers and Power Bars any time of the day or night.