Accessibility links
Ahmad Jamal On Piano Jazz Ever since his 1958 live album from Chicago's Pershing Lounge, Ahmad Jamal has been recognized as a major force in jazz. In this program from 1985, Jamal reprises two signature pieces from that session in duets with Marian McPartland: "Poinciana" and "But Not for Me." 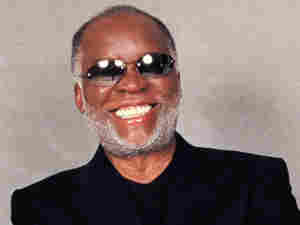 Ahmad Jamal was born in Pittsburgh on July 2, 1930. He started playing piano at the age of 3 when his uncle, a piano player, challenged his young nephew to copy what he was doing at the keyboard.

Jamal's earliest training began at age 7 under Mary Caldwell Dawson, a musician, teacher and founder in 1941 of the National Negro Opera Company. By the time he was 14, Jamal had made a name for himself on the local music scene, performing professionally with some of the city's seasoned jazz musicians.

Jamal was just 17 when he began touring with George Hudson's Orchestra. He recorded his first album on the Okeh label in 1951 and shortly thereafter joined The Four Strings, which was headed by Joe Kennedy Jr. The group disbanded that same year, and Jamal formed The Three Strings with guitarist Ray Crawford and bassist Israel Crosby. The group, with Vernel Fournier stepping in as drummer, became the house trio at Chicago's Pershing Hotel in 1958. Its live album, But Not for Me, included Jamal's now-legendary version of "Poinciana" and became a bestseller, staying on the charts for more than two years.

Jamal used the proceeds from the album to open a restaurant called The Alhambra, where his group recorded the albums Alhambra and All of You. The club eventually closed, and The Three Strings disbanded in 1962.

Jamal has continued to perform and record, usually with a standard piano-bass-drums trio, as a soloist, with strings and as an electric keyboardist. An innovative and much-admired artist, Jamal has seen his music, career and influence grow relatively steadily over the years. Miles Davis, Keith Jarrett and Herbie Hancock have all pointed to him as an influence.

In the 1990s, Ahmad Jamal signed with the French label Birdology. Distributed in the U.S., in turn, by Verve, Atlantic and Dreyfus records, his albums have demonstrated renewed creativity, and have received the critical acclaim that has marked his career on into the 21st century.

In 1994, Jamal received the National Endowment of the Arts Jazz Master's Award. In 2007, he was recognized by the French Government with its prestigious Order of the Arts and Letters.

Album
Ahmad Jamal at the Pershing: But Not for Me
Artist
Ahmad Jamal
Label
MCA
Released
1958