Accessibility links
Deciding To Live In the depths of depression, writer Kij Johnson considered jumping off a bridge. But then she took up rock climbing and discovered the sport could help her embrace the risks and joys of life. 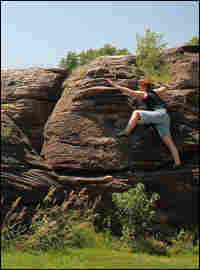 Kij Johnson believes that rock climbing helped her get over her suicidal depression. "Jumping would have been easy," she writes. "Just step over the bridge railing and let go. Climbing is harder, but worth it." hide caption 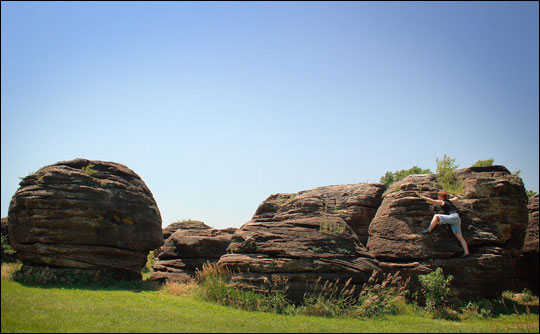 Kij Johnson believes that rock climbing helped her get over her suicidal depression. "Jumping would have been easy," she writes. "Just step over the bridge railing and let go. Climbing is harder, but worth it." 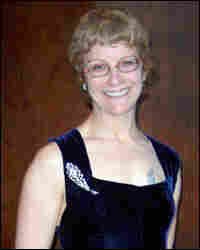 Kij Johnson is a writer whose fiction has been nominated for the Nebula Award and the World Fantasy Award. She climbs in the Cascades and at Stone Gardens in Seattle, where she lives. Johnson is working on a collection of essays about the sport. hide caption

I believe I am a climber.

Three years ago, a series of medical and personal crises took what was a clinical depression and made it something much darker.

I thought of it as falling — as jumping — off a bridge on a rainy winter day: three seconds in the air before I hit the water and plunged deep into the icy cold, my heavy coat pulling me deeper. And the surface far overhead — too far away.

This is the question that kept me from making the image a real one. What if I changed my mind? Jumping into the water, the air in my lungs would fail me before I could swim back to the living world. I would know for those last seconds that I did want to live after all, but it would be too late.

I'm not sure why I started climbing. I walked through the door of the local climbing gym one day on a whim. It was an alien world: strong beautiful men and women, towering walls under sodium vapor lights, white dust filling the air. Light instead of dark. Up instead of down. It was in every way the opposite of what was inside me.

The second time I climbed, I got to a move where I was sure I would fall. I was 25 feet up on a rope, but I didn't know yet that I could trust it. I heard my voice say out loud, "I have a choice here: fear or joy." What I meant was, climb or don't climb, live or die.

In the more than two years since then, I have climbed hundreds of days — inside and out, sometimes tied to a rope, often not.

I do pay a price here. My body can be so bruised from hitting walls that people ask me about my home situation. Nine months ago, I broke my leg and ankle. I healed fast, but the risk remains. Next time I might not.

Climbing requires a coldblooded decision to live. If I am inattentive or careless, I will fall. Every time I climb at the gym, or rope up for a route outside, or go bouldering — which is climbing without a rope, and often more dangerous — I am taking a risk. And I am committing to staying alive.

Now, I believe in climbing, in not jumping. Jumping would have been easy: Just step over the bridge railing and let go. Climbing is harder, but worth it. I believe that deciding to live was the right decision.

There's no way to describe the terrible darkness of depression in a way that nondepressed people can understand. Now, I'm less focused on the darkness. Instead, I think about the joy I feel in conquering it and the tool I used.

I am a climber, and I am alive.