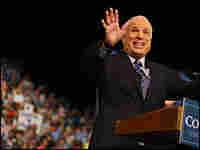 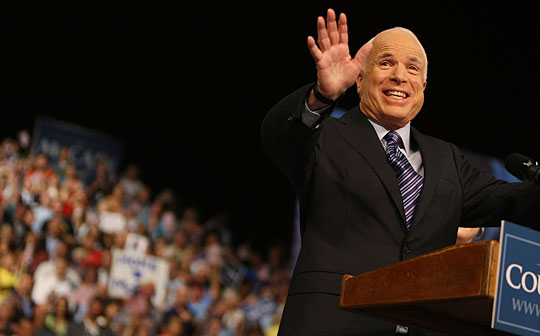 NPR coverage of the McCain-Palin announcement

The following are the remarks as delivered by Sen. John McCain as he introduced his vice presidential candidate, Gov. Sarah Palin of Alaska, on Friday.

I'm very happy, very happy today to spend my birthday with you and to make an historic announcement in Dayton, a city built on hard, honest work of good people. Like the entire industrial Midwest, Dayton has contributed much to the prosperity and progress of America.

My friends, I've spent the last few months looking — looking for a running mate who can best help me shake up Washington and make it start working again for the people that are counting on us. As I'm sure you know, I had many good people to choose from, all of them dedicated to this country and to getting us back on the road to prosperity and peace. And I am very grateful to all of them and honored by their willingness to serve with me. And I'm going to continue to rely on their support and counsel during this campaign and after we win this election, when the real work begins.

But I could only choose one. And it's with great pride and gratitude that I tell you I have found the right partner to help me stand up to those who value their privileges over their responsibilities, who put power over principle and put their interest before your needs.

I found someone with an outstanding reputation for standing up to special interests and entrenched bureaucracies; someone who has fought against corruption and the failed policies of the past; someone who stopped government from wasting taxpayers' money on things they don't want or need, and put it back to work for the people; someone with executive experience who has shown great tenacity and skill in tackling tough problems, especially our dangerous dependence on foreign oil; someone who reached across the aisle and asked Republicans, Democrats and independents to serve in government; someone with strong principles, a fighting spirit and deep compassion; someone who grew up in a decent, hard-working middle-class family, whose father was an elementary school teacher and mother was the school's secretary.

The person I'm about to introduce to you was a union member and is married to a union member, and understands the problems, the hopes and the values of working people; knows what it's like to worry about mortgage payments and health care, the cost of gasoline and groceries. A standout high school point guard; a concerned citizen who became a member of the PTA; then a city council member, and then a mayor; and now a governor who beat the long odds to win a tough election on a message of reform and public integrity. And, I am especially proud to say in the week we celebrate the anniversary of women's suffrage, a devoted wife and a mother of five.

She's not — she's not from these parts and she's not from Washington. But when you get to know her, you're going to be as impressed as I am. She's got the grit, integrity, good sense and fierce devotion to the common good that is exactly what we need in Washington today. She knows where she comes from and she knows who she works for. She stands up for what's right, and she doesn't let anyone tell her to sit down. She's fought oil companies and party bosses and do-nothing bureaucrats, and anyone who puts their interests before the interests of the people she swore an oath to serve.

My friends and fellow Americans, I am very pleased and very privileged to introduce to you the next vice president of the United States — Gov. Sarah Palin of the great state of Alaska.