First in a three-part series. 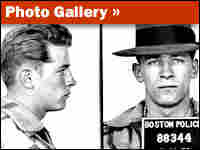 Confidential informants are the lifeblood of law enforcement's effort to fight crime.

But the best informants are generally very bad people — ruthless criminals — and while their information helps the FBI crack cases, the practice of using these informants is fraught with risk.

A single case in Boston changed the way agents work with these criminals.

If you asked the FBI about their worst nightmare, it would be crooked agents being in league with a mob boss. So their nightmare came true in Boston during the 1970s.

That's when the godfather of the city's Irish mob, Whitey Bulger, became a confidential informant for the FBI and, in the process, he managed to corrupt two agents — John Connolly and his boss, John Morris.

Former FBI supervisor Jim Ring says that the idea that an agent could be turned shocked everyone when it was revealed. To this day, it still astounds him.

"I was asked a question at a civil trial. They asked me what my first reactions was when I heard that [supervisor] John Morris admitted taking money from them," Ring says. "My answer was: I started to throw up."

FBI agent John Connolly's unholy alliance with Whitey Bulger all started with a "meet" at Wollaston Beach just outside of Boston. It was 1975, and he had asked Bulger to come to the beach parking lot for a chat.

It was not far from the housing projects in Southie where the two men had grown up. They had known each other as kids. It was late at night. No one was around. All that could be heard were waves slapping on the shore.

Connolly had driven there determined to convince Bulger that he should become a top echelon informant — someone who provides the FBI with firsthand information about high-level organized crime figures. Bulger had been an informant in the past, Connolly was determined to reopen him as a snitch.

Connolly didn't expect to convince Bulger to rat out the Irish mob that he was a part of, but he did think he could get him to provide information on Italian organized-crime rivals. Eventually, Bulger agreed to do just that.

That meeting at Wollaston Beach was the beginning of a relationship that would end up fundamentally changing the FBI's confidential informant program.

From the moment Jim Ring came into the Boston field office and heard Connolly was working Bulger as an informant, he had an uncomfortable feeling. He called Connolly into his office to make sure there was no misunderstanding about how informants should be handled.

"I told him information goes one way," Ring said. "Informants are not consultants. They are not friends, they are informants. And the agent remembers that and treats them accordingly."

But, as he was to discover later, the information didn't go one way. For almost 30 years, Connolly and Bulger forged an unholy alliance. Bulger provided tips that helped the FBI tackle its top priority — dismantling the Italian mob — and Connolly protected Bulger from investigations by the FBI and other agencies.

It was an unspoken agreement, apparently, but an agreement all the same. Bulger knew that Connolly wanted to keep him out of jail so that he could keep providing intelligence about the Italian mob.

Repercussions From The Bulger Case

Valerie Caproni is the current general counsel at the FBI. She says the fallout from the Whitey Bulger case still haunts the Bureau.

"I think what the Whitey Bulger case did was it really shined a light on the relationship between the Bureau and informants," Caproni says. "They are killers, they are liars, they're cheaters and those are the people who are informants. So I think in part the problem with the Whitey Bulger case was people looked at the relationship and were appalled."

What is certain is that the case rocked the FBI to its core. The wave of negative publicity forced the Justice Department to take a hard look at the use of informants and how agents deal with them. That review eventually produced a set of guidelines that agents say are so strict that they practically gut the program.

"The unfortunate thing is that when you have something like this, there tends to be an overreaction," says former FBI assistant director Barry Mawn.

Mawn arrived in the Boston field office when a federal judge started looking into the FBI's relationship with Bulger in 1997. The guidelines grew out of that investigation. He said the guidelines concerned him as soon as they came out.

"When you start to put a lot of guidelines and a lot more rules and make it very difficult, then the agents for that reason and some other reasons tend to shy away," Mawn says.

The guidelines are 28 single-spaced pages of rules and regulations for FBI agents working with informants. They cover everything from monetary payments to general provisions for deactivating a confidential informant.

Jim Ring flips through the guidelines, pointing out sections he says agents find particularly onerous. Consider the FBI's requirement that they authorize any crimes informants commit while working as a confidential informants.

Ring says the rule makes sense if you have a drug informant who needs to sell a nickel bag as part of a case. But for top echelon informants, he says, the rule seems naive.

"So if am going to have a capo as an informant in La Cosa Nostra, am I to assume he is going to say, 'Okay I won't commit crime?'" Ring laughs.

The whole reason top echelon informants are so valuable is precisely because they are in the middle of a criminal enterprise — crime is all around them. In most cases, they are violating racketeering statutes just for being a member of the mob. He flips to another section.

He reads a section from the guidelines:

Ring throws up his hands and rolls his eyes.

More than a dozen current FBI agents echoed Ring's remarks. They say developing confidential informants is almost impossible if they can't protect their identities. In some cases, asking them to testify would be tantamount to giving them a death sentence. Their criminal organizations would have them killed.

The FBI's Caproni says the complaints are just agents grousing.

"Agents sometimes like to complain, and this is something they can complain about," Caproni says. "That the rules have changed a little bit, it is laid out much more clearly when they have to reveal a sources identity. But I think as a general rule we have a very good track record with maintaining the confidentiality of the identities of human sources."

Ring says the guidelines are hamstringing agents. If the FBI wants to get insiders from al-Qaida or the mob to help fight crime, they need to put what happened in Boston in the past and allow agents to use their own judgment.

"They have tried by legislation to make what Morris and Connolly did impossible," Ring says. "And I think that is impossible to do because corruption is a matter of the heart."

New attorney general guidelines on a variety of FBI procedures are expected to be released in the next couple of weeks. In spite of agents' complaints, Caproni says the confidential informant guidelines won't change.