Accessibility links
Prefab: From Utilitarian Home To Design Icon Architects' answer to efficient design is the prefab home, which has been both a design sensation and a cookie-cutter bore over the years. A current MoMA exhibit explores the history of that house and shows how technology could make innovative design more affordable. 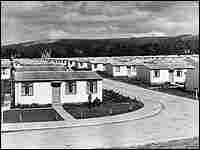 A housing estate in 1940s England, where 173 aluminium prefab houses were built and occupied in just over 11 months. Maeers/Fox Photos/Getty Images hide caption 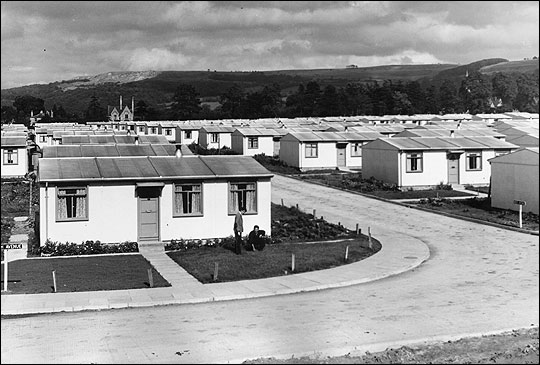 A housing estate in 1940s England, where 173 aluminium prefab houses were built and occupied in just over 11 months.

For a prefab housing development, the steel and aluminum units are fully manufactured inside the Brooklyn Navy Yard. With construction indoors, a lot less waste occurs. Courtesy of Alexander Gorlin Architects hide caption 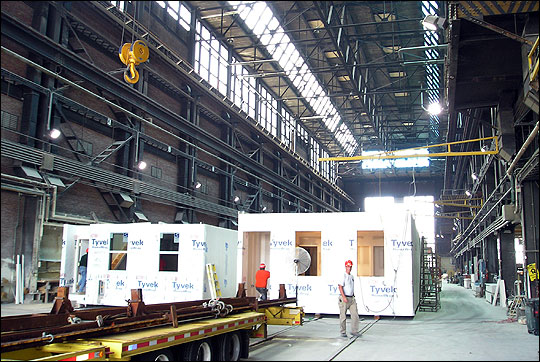 For a prefab housing development, the steel and aluminum units are fully manufactured inside the Brooklyn Navy Yard. With construction indoors, a lot less waste occurs.

In southern Brooklyn, a row of townhomes — done in a very sleek, contemporary, unadorned style — are going up in the Nehemiah Spring Creek Housing Development. This project is featured in the MoMA exhibit, "Home Delivery." Courtesy of Alexander Gorlin Architects hide caption

In southern Brooklyn, a row of townhomes — done in a very sleek, contemporary, unadorned style — are going up in the Nehemiah Spring Creek Housing Development. This project is featured in the MoMA exhibit, "Home Delivery."

Some of the world's most famous architects have tried to use mass production techniques to design houses.

Now, an exhibit at New York's Museum of Modern Art explores the history of the prefab house. The exhibit comes as computer design is revolutionizing the way prefabricated houses are constructed.

On a former landfill in the reedy seaboard of southern Brooklyn, where ocean breezes gently stroke the air, the sound of power tools splinters the morning silence.

Workers are attaching siding to the facades of several rows of gleaming new town houses, the first phase of the Nehemiah Spring Creek affordable housing development.

Spring Creek looks like any construction project, built the conventional way. But the town houses lining these just-paved streets aren't actually built on site. They were trucked in, arriving at the site in almost move-in condition, says Michael Carolo, project manager at Monadnock Construction Inc.

"The exterior just has to be completed, but the interiors are just 100 percent complete, including light fixtures, tile floors — pretty much virtually done when they come out here," Carolo says.

The town houses are prefabricated, manufactured miles away in a vast warehouse at the Brooklyn Navy Yard. Then they are brought here whole on a flat-bed truck at night, when they won't interfere too much with New York City traffic, says Vincent Linarello, project architect for Alexander Gorlin Architects, which designed Spring Creek. Finally, they're lifted by crane onto foundations that have already been built.

From Fashion Reject To In Style

"It's gone from being the scary double-wide on the highway to being something that is seen as rather stylish," says Sam Grawe, editor in chief of Dwell magazine, which has championed prefab and markets a line of prefab house plans.

Fueling the revival has been the boom in computer design tools, says Barry Bergdoll, curator of the architecture and design department at New York's Museum of Modern Art. The museum is now showing an exhibition on prefab.

"A number of architects, particularly younger architects ... have just recently come out of an entire training where they think of design already as something that happens in a computer," Bergdoll says.

And computer design has opened up new possibilities for prefab, enabling architects to customize houses to suit buyers' tastes, without sacrificing the speed and efficiency that have long been part of the dream of prefab.

The first documented prefab house was the Manning Portable Cottage. It was built in the 1830s by London carpenter H. Manning, whose son was immigrating to Australia. H. Manning wanted his son to have a comfortable place to live in the new land, but didn't know what materials and supplies his son would find there. So he constructed a house in pieces that could be stored in the hull of a ship, and then unloaded and assembled once his son arrived Down Under. It worked so well that Manning shipped dozens of the cottages there. A few still stand today.

In the United States, Bergdoll says, prefab arguably began with the balloon-frame construction method pioneered by Chicago builder Augustine Taylor. It involved hammering together two-by-fours at regular intervals and connecting them with cross-pieces. It's the same building method widely used in the United States today.

Walls built in this fashion could be built at a remote location and then transported to a building site to be fashioned into a house quickly, which is why Bergdoll considers this a form of prefab.

The most successful prefab house by far was the kit house introduced by Sears, Roebuck and Co. in 1908. The house was ordered by catalogue; it arrived in pieces and usually took months to build. But it cost less than two thirds than a more conventionally-built house. Ultimately, about 100,000 were sold.

The kit house was supposed to look as much like a normal home as possible. But in the years after World War I, prefab began to take off in some much more flamboyant directions.

Design For The Masses

Architects and designers like Walter Gropius, Buckminster Fuller and Frank Lloyd Wright saw prefab as a way to bring smart design to the masses. The Industrial Revolution, they reasoned, had proven that you could build cars, clothing and furniture more cheaply and efficiently on an assembly line. Couldn't the techniques of mass production be harnessed to make inexpensive, attractive houses for the masses?

Fuller, for instance, believed that a factory-made home could change the way people around the world lived, according to a book accompanying the museum exhibit. Begun in 1927, Fuller's famed Dymaxion House was meant to look and feel like a product of the machine age. It could be easily assembled and shipped in pieces, with a low-slung aluminum domed roof that hung from a stainless steel strut. It also had a venting system that could cool the house naturally, thinking ahead of green design innovation by decades.

During World War II, Marcel Breuer designed the Plas-2-Point House, which eliminated the need for expensive foundation work because it was built of plywood coated with liquid plastic and anchored to two foundation blocks. Because the house could be built cheaply and quickly, Breuer hoped Washington would see it as the answer to the looming need for postwar housing.

But like many of the most innovative prefab designs, neither the Dymaxion House nor the Plas-2-Point House was ever built. The enormous start-up costs have often made realizing prefab designs difficult, Bergdoll says.

"A developer doesn't need to buy a factory in order to build more two-and-a-half story colonials on an exurban lot — and turn that open land into an instant development with houses that look [very reassuring and] very much the same as they did in the 1940s," Bergdoll says. "But if someone wants to launch a prefabricated house system, even with its possibilities of customization, they have this enormous upfront investment in machines and a factory, etc., so there are all sorts of odds set against someone who wants to do this."

Those prefab houses that did get built sometimes failed to catch on with the public. After World War II, inventor Carl Strandlund secured a $40 million federal grant and started the Lustron Corporation in a former military aircraft plant in Ohio. Strandlund envisioned a cheaper alternative to the Levittown house, but the structures he produced, made of porcelain-enamelized steel, looked to a lot of people like White Castle hamburger stands.

"It was hard for a lot of people to stomach the sort of unadulterated embrace of a new material and new technology in a house that looked so alien," says Peter Christensen, co-author, with Bergdoll, of the book Home Delivery, and curatorial assistant in the architecture and design dept at MoMA.

The houses were also 30 to 50 percent more expensive than Strandlund figured. In 1950, Lustron declared bankruptcy.

Over the years, architects have pushed prefab into some startling new directions, designing futuristic pod houses and modernist boxes on stilts that can be packed up and moved to a new site whenever the owner wants. To see them is to be dazzled by their sheer inventiveness.

Prefab has fared well in some countries, especially Finland and Japan, where it makes up 20 percent of the housing market.

But in the United States, prefab housing that has sold tends to be the cheapest and most standardized kind, such as mobile homes.

Innovative Design For The Masses?

With its current exhibition, the Museum of Modern Art is hoping to change how prefab is seen and show how much promise it has.

Bergdoll notes that computers have ushered in an era of "mass customization," allowing, say, Nike to produce enormous quantities of shoes while still allowing buyers to personalize them with individual features such as team logos and colors.

"You can do the same thing by exactly the same means with a prefabricated house," he says. "So, we can send computer files directly from an architect's desktop to a laser cutter or other type of machine in a factory that will literally cut the parts that have just been designed. That can be done with computer programs that build in all sorts of variables. So the same program that's designing, say, an individual family house can have any number of what architects call parameters or variables."

An example is the 'instant house' designed by Larry Sass, assistant professor at the Massachusetts Institute of Technology. That house is one of five prefab structures built for the exhibition on an empty lot next door to the museum.

Buyers can specify what kind of houses they want. Sass' computer specifies what kind of materials they need. With a rented laser-cutter, the pieces are cut and then numbered for easy assembly.

"Then you get four friends — they don't have to ever have built a house before — and the five of you with five rubber mallets can put the whole thing together in five days," Bergdoll says.

"So if you think about it — what it actually means as a way of thinking — is what I think of as the ultimate technology transfer. The high technology of the MIT computer labs can be sent to a place of no skill and a dwelling of any style you like."

Sass hopes the 'instant house' and a New Orleans-style shotgun house that was also built next to the museum can be used to replace homes destroyed by Hurricane Katrina. But the same methods can construct any style of house, Bergdoll says.

Methods like these allow buyers to individualize their houses, which can go a long way toward making them more acceptable to the public, Bergdoll says. In the United States, where houses are widely seen as an expression of personal taste, buyers have long associated prefab with standardization.

The new methods allow clients to customize a house to their specification. There's enough flexibility at the architect and customer's end to accommodate an individual's preferences.