Accessibility links
Remembering The 1988 Yellowstone Fires Twenty years ago this summer, Yellowstone caught fire. The flames scorched about 1.2 million acres across the area, leaving the impression that the world's first national park had been destroyed.

First of a five-part series. 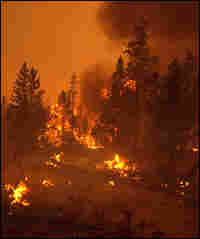 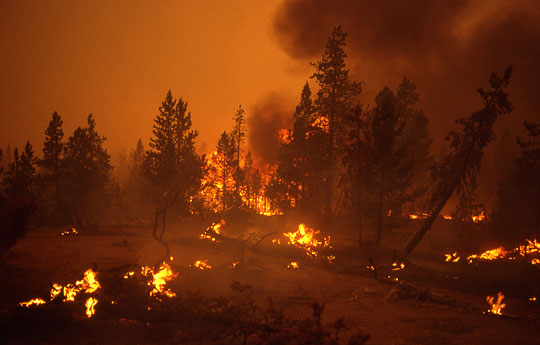 A ground fire at Yellowstone's Norris Geyser Basin in August 1988. 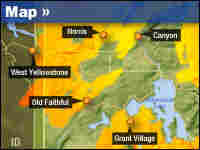 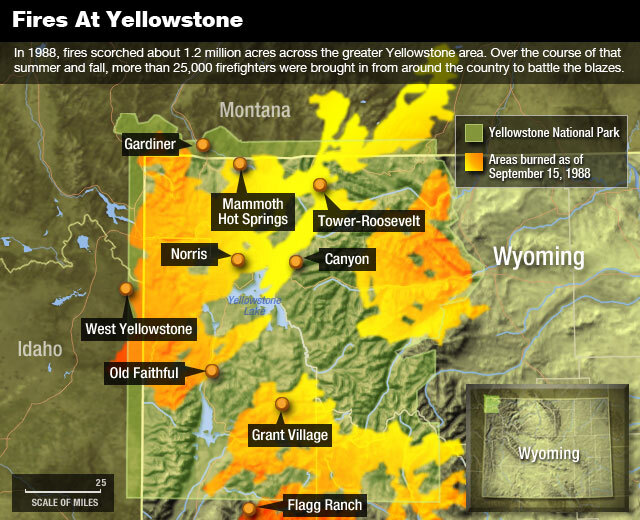 Enlarge to see the areas of Yellowstone burned in the 1988 fires. 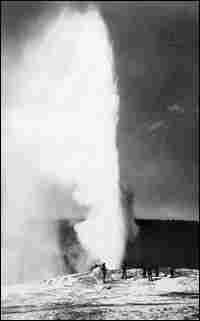 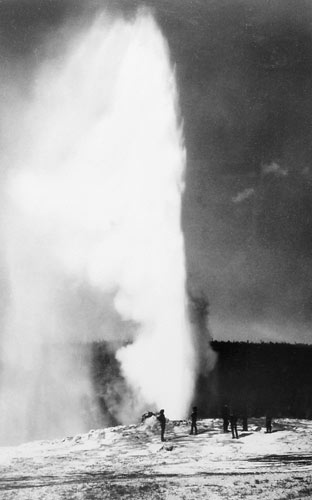 Twenty years ago, in the summer of 1988, Yellowstone caught fire. The fires, which began in June, continued to burn until November, when winter snows extinguished the last blazes. Over the course of that summer and fall, more than 25,000 firefighters were brought in from around the country.

In the end, the flames scorched about 1.2 million acres across the greater Yellowstone area, leaving the impression that the world's first national park had been destroyed.

Scott McMillion reported for the Bozeman Daily Chronicle, in Bozeman, Mont., for 20 years. One of his earliest assignments was covering the 1988 fires.

"Yellowstone is a beloved icon," McMillion said. "It was a celebrity fire in a celebrity place. Everyone knows about Yellowstone and there was an impression that it was being allowed to burn to the ground."

The heightened media presence and the televised coverage of the fires horrified many people who believed that Yellowstone would be forever ruined. But the doom and gloom prophecies about the destruction of Yellowstone proved to be wrong.

'Wonderland' Of The West

Lee Whittlesey is Yellowstone's official historian. He's a small, wiry man, sporting a red, plaid lumberjack shirt and an impish grin. He works at the Yellowstone National Park Heritage Research Center in Gardiner, Mont., just outside the north entrance to the park.

"Congress carved it out of territorial Montana, Wyoming, and Idaho," well before they became states," Whittlesey explains. "So, if you look at an 1872 map of the American West, you see the rectangle of Yellowstone National Park and nothing else for hundreds of miles. It's the oldest entity in this region."

But despite its remote location, the park quickly attracted a lot of attention. Even before it was officially established, it was called "Wonderland," named from Lewis Carroll's book, Alice's Adventures in Wonderland.

Mentions of Yellowstone in newspapers and magazines began to appear as early as 1871. The first such article was titled, "The Wonders of the Yellowstone." It described the geysers, hot springs, mud pots and steam vents that were considered the original attractions in the park. These thermal features were unlike anything anyone had seen before and they heightened people's curiosity.

That fascination with Yellowstone hasn't changed much in the 136 years since the park's founding. At peak tourist season, hundreds of people line the boardwalks around the Old Faithful geyser, the park's most famous attraction. Those who have visited the park, and even those who have only seen pictures, consider it to be a national treasure and in need of protection — both from humans and from more natural threats, like fires.

Fire is nothing new in Yellowstone. The park has survived many of them and usually averages at least one a year. Often these are smaller fires, which go out on their own. Starting in 1972, the National Park Service implemented a "let it burn" policy, allowing natural fires — those caused by lightning — to run their course. It proved to be a successful strategy and the park service continued to follow that policy for the next 16 years.

But the summer of 1988 proved to be different from previous fire seasons. By June, Yellowstone was already in a severe drought, despite higher than average rainfall in the spring. By mid-July, fires — caused both by lightning and human carelessness — had consumed close to 17,000 acres in the park. No rain, low humidity, and increasing winds made the Park Service nervous and the "let it burn" policy was put on hold.

By the end of July, the larger fires had become nearly uncontrollable. Public sentiment was that the Park Service had failed to do its job. But according to Park Superintendent Bob Barbee, the situation was unavoidable.

"No matter what we would have done, the conditions were such that there were going to be great fires in Yellowstone under any circumstances," he said. "They were started by lightning, by outfitters, by woodcutters — we were a perfect setup to burn."

The worst day of the 1988 fires came on Aug. 20, a day known as "Black Saturday." High winds propelled the extremely hot and fast-burning fires across more than 150,000 acres, practically doubling the amount of land that had already burned.

By this point, the national media had turned its full attention to the events in Yellowstone. The locals, too, were worried. The fires were only a few miles away and they seemed dangerously out of control.

The Benefit Of Blazes

What many in the media, and in the general public, failed to understand at the time was that fire — even fire of this magnitude — was necessary to maintain the overall health of Yellowstone's ecosystem. Lodgepole pines — tall, skinny trees with branches near the top, or crown — dominate most of Yellowstone's landscape. Some of their pine cones are sealed with a waxy resin and only open once temperatures reach above 113 degrees Fahrenheit. In other words, the trees need the heat of those fires in order to reproduce.

"Fire is as important to the great lodgepole ecosystems of the Northern Rockies as sunshine and rain," Barbee said. "So the forest recycled itself quickly. Now if you go to Yellowstone, you'll see a carpet of green, the forest is fully recovering. And so we don't characterize the fire as causing damage to the park."

A visit to the park proves his point. The 1988 fires undeniably changed Yellowstone's landscape, but they didn't destroy the park. Seedlings began to appear as early as 1989 and now there are healthy and green 20-year-old trees covering the park.

The fires also provided a sort of "living laboratory" for scientists to learn about how ecosystems recover. More than 250 fire-related research projects have been conducted in the past two decades, examining the fire's impact on wildlife, water and vegetation.