Accessibility links
Some FBI Agents Pay High Price For Using Snitches There's a saying among FBI agents: If your confidential informant doesn't get you in trouble, he's probably not a very good informant. But recent high profile court cases have some agents thinking twice about working with confidential informants.

Second in a three-part series. 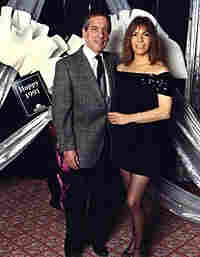 Gregory Scarpa and his girlfriend, Linda Schiro, are shown here in a 1991 photo. Schiro was the key prosecution witness in the murder trial of former FBI agent R. Lindley DeVecchio. Her testimony detailed Scarpa's 30-year relationship with the FBI and the close relationship he enjoyed with the defendant, going back to 1978. AP/Brooklyn District Attorney's Office hide caption

Agents call confidential informants a necessary evil and a vital part of crime fighting, but recent high profile court cases have some agents thinking twice about working with a high level snitch.

This time last year, former FBI agent Lin DeVecchio was in a Brooklyn courtroom charged with murder. His accuser was the longtime girlfriend of a mafia hitman named Greg "the Grim Reaper" Scarpa.

She said DeVecchio had given Scarpa — one of his confidential informants — information he needed to kill four people. It was a mob girlfriend's word against DeVecchio's. And then something unusual happened — two journalists came forward with a very key piece of information.

Mafia expert Jerry Capeci, who runs the Web site Ganglandnews.com, and Village Voice reporter Tom Robbins had interviewed Scarpa's girlfriend, Linda Schiro, in 1997 for a book. Back then she had absolved DeVecchio of any involvement in the murders.

"There is no way that is what she told us back in 1997," Capeci says."And we felt we had to explain that is not the only story she told about those four killings."

Capeci and Robbins had Schiro on tape; she had changed her story when she was on the stand.

"Back in 1997, we asked her specifically if Lin was involved in the killing, and she said 'Oh, no absolutely not,'" he says.

Schiro testified — and by doing so, she released the two journalists from their confidentiality agreements. Their tapes were subpoenaed, and a short time later, the Brooklyn district attorney withdrew the case against DeVecchio. Their key witness had been discredited.

While DeVecchio, once one of the bureau's most admired agents on dealing with informants, was vindicated, a 19-month investigation left him with $600,000 in legal bills and a familiar lament:"My question is, where do I go to get my reputation back?" he asked reporters after he was cleared.

Given how the story unfolded, it isn't surprising that agents are worried that they could be caught in the same web — that their top informants could implicate them in their crimes, or a victim will sue them for not preventing one.

Jim Kossler was the coordinating supervisor for organized crime for the FBI in New York — DeVecchio's boss. He says that what happened to DeVecchio has become a cautionary tale for agents in the field.

"I mean this story is so unbelievable," says Kossler. "The fallout of it as it relates to how the bureau does its business in the future — it is going to have a great impact."

Kossler says agents can't help but think about what they put at risk — personally — when they tap a criminal to get them inside information. DeVecchio paid a heavy price. Among other things, he lost his reputation, and he even lost his business.

"He had a pretty good investigative business," says Kossler. "And he lost that whenever he got indicted. He couldn't work. When you get indicted like that, it is a harrowing experience. He handled it very well. I don't know if I could handle it."

Typically, when an agent is named in a lawsuit, they ask the Justice Department for representation. If the department determines the lawsuit relates to their FBI work, it assigns counsel or pays some government hourly rate for the defense. FBI general counsel Valerie Caproni said that's how it worked in DeVecchio's case.

"The department determined that the charges arose out of his work as an FBI agent, and therefore was prepared to pay for his defense and paid a substantial amount toward his criminal defense," she says.

But DeVecchio was worried the department lawyers wouldn't be strong enough. So he hired his own. The defense cost him $600,000 more than the Justice Department was willing to pay.

The last civil case related to confidential informants that was brought against him was finally dismissed earlier this year — 18 years after he retired.

"It is a little Kafkaesque, where the legal system is being used against you, and they know exactly which buttons to push, and there is nothing you can do about it," he says.

In one case against Ring, attorneys tried to go after his assets and his house — all because he was supervising a case with a confidential informant.

"And someone said to me, 'After this happened to you, I would never touch an informant,'" he says.

Caproni, for her part, says these cases are the exception, not the rule. She says she hasn't seen a fall-off in the number of confidential informants the FBI is working.

But in interviews, half a dozen active agents said they were more much cautious now than before the DeVecchio episode.

There's a saying among agents: If your confidential informant doesn't get you in trouble, he's probably not a very good informant.