Accessibility links
Making Ends Meet Without Health Insurance National polls show that worries about health insurance are near the top of Americans' concerns. More than 10 million Americans are solidly middle income and uninsured. 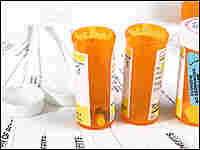 For years, James Calhoun has been enthralled by computers. He loves being able to create something on the keyboard and see it immediately transformed on the screen. When he was a teenager, he used the computer to make videos. Now, in his twenties, Calhoun focuses on the Web.

He helps companies build interactive advertising websites that reflect print, radio and TV campaigns. In recent years, Calhoun has worked for a number of small companies, none of which provided health benefits.

Calhoun says that when the dot com bubble burst, there was a mass exodus of freelancers into the workforce.

"Suddenly, anybody would take any work for any money," he says. "We had to survive."

Calhoun describes himself as part of a new group of workers he calls "perma-lancers" — people who are expected to perform like full-time employees, but without the benefits.

"Perma-lancers," Calhoun says, "[are] people who work as if they were full-time employees, but don't have health insurance, don't get paid vacation days, don't get paid sick days, and if the advertising revenue falls off for a quarter, it's no problem to stop an assignment."

In other words, perma-lancers are easily laid off.

"Every time I get sick, I worry," he says. "What if this turns into bronchitis? I have to take off work, not paid. I have to pay the doctor full price. When getting prescriptions I say, 'Hey, can you search for generics? I don't want to pay for name brand meds.' It goes into my planning day to day. When I'm crossing the streets, I say, 'Careful, if you get hit by a car, that's five grand.'"

Calhoun now thinks twice about the risky sports that lure many other 20-somethings.

"This January, I wanted to go snowboarding and I said, 'Whoa, I'm gonna have to stay off the hard slopes. I couldn't afford the cost if I was to fall and catch a sprain to my wrist.'"

Calhoun has seriously considered buying health insurance, but he would have to buy it on the open market as an individual. He estimates that he would spend 50 percent of his post-tax income just on housing and health insurance. Calhoun thinks it makes more sense to play it safe and save the money.

'In the Same Boat'

Calhoun knows he is not alone. Currently more than 10 million Americans are solidly middle income and uninsured.

"Most of the people I know are at least in the same boat if not worse. A lot of them are working at lower wages and have the same problem. For them, pricing out comprehensive health care isn't even an option."

"It's an absolute necessity," Calhoun says, "that health care is provided for people who are working day-to-day at the very least, if not everyone. I know plenty of people who actually say, 'I can't afford to get sick, go to [the] hospital, go to [the] doctor.' Sick days are not something that enters the vocabulary."

Come 2008, James Calhoun says he will cast his vote based in large part on what the presidential candidates have to say about healthcare, and how to reform the system.