Accessibility links
The Deeper Well of Memory Watching her mother battle Alzheimer's, Christine Cleary feared she might one day forget things she holds dear, including her own late husband. Now Cleary believes memory is more about heart than mind.

Listen
The Deeper Well of Memory 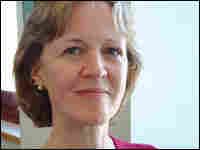 Christine Cleary is a communications manager at Dana-Farber Cancer Institute, where she profiles patients and their families. She is currently writing a book about the art and science of memory. Cleary lives in Cambridge, Mass., with her two daughters. Kimberly Regensberg hide caption

I believe that memory is never lost, even when it seems to be, because it has more to do with the heart than the mind.

At the same time my 44-year-old husband, Ed, was losing his life, my mother was losing her ability to remember. As Ed's lungs filled with cancer, Mom's brain was becoming tangled in plaque. She forgot how to start the car, whether or not she had eaten and which family members had died — including my father.

I became afraid that one day I, too, would be unable to recall my husband, not because of Alzheimer's, but simply because my memory of him might fade. So from the day of Ed's diagnosis until his death a year later, I set out to memorize him: his crooked smile and vigorous embrace, his woodsy smell and the way he cleared his throat when he reached the top of the stairs. I knew I'd always be able to recite his qualities — kind, gentle, smart, funny — but I wanted to be able to conjure up the physical man in my mind, as fully as possible, when he was gone.

Back then, I thought memory was a deliberate, cognitive process, like remembering multiplication tables or lyrics or where the keys were. Unable to rescue Ed from cancer, I was determined to save him from the only thing worse than dying: being forgotten.

Later I learned that memory has a will of its own. You can't control it any more that you can influence the weather. When it springs up, a person loved and lost is found, if only for a few seconds.

Recently when I was driving, I had a deep and sudden sense of Ed and the way it felt to have him next to me in the car. My body softened as it used to when we were together seven years ago, living a shared life. I wasn't remembering his face or the way he walked; the careful details I had stored had nothing to do with this moment in the car. Looking in the rearview mirror, I recognized in my own face the same look I once saw on my mother's face in the nursing home. I had asked her a question about my father, and she became confused about his identity. Yet, as she sat there, dressed in a shapeless polyester outfit, she briefly appeared young and radiant, her face filled with love and her eyes misty. Her brain couldn't label the man correctly, but that was not important. It was clear to me that her husband was vivid in her heart, a memory even Alzheimer's could not crush.

I believe there is a difference between memory and remembering. Remembering has to do with turning the oven off before leaving the house, but memory is nurtured by emotion. It springs from a deeper well, safe from dementia and the passage of time.