Accessibility links
Katrina's Lessons Shape Reaction To Gustav The memory of Hurricane Katrina still lingers in New Orleans. This time around, many of New Orleans' residents heeded the call to leave the city ahead of Hurricane Gustav. State officials also learned from Katrina. 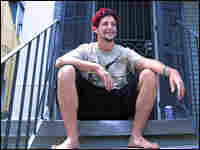 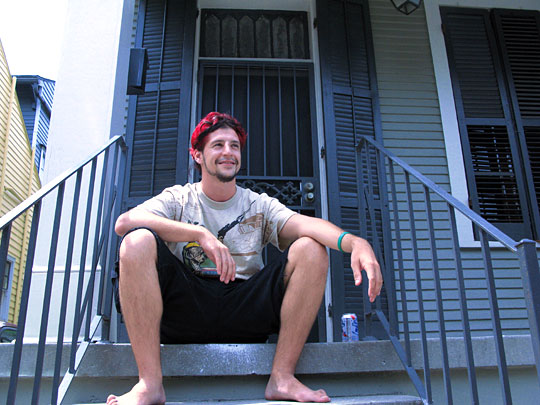 Chris Maverick, a 26-year-old bartender, planned to ride out the storm in New Orleans' Marigny neighborhood. 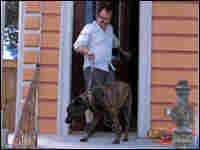 Ken Foster, shown with his dog Brando, was one of the last ones to leave New Orleans' Lower Ninth Ward on Sunday. Katia Dunn/NPR hide caption 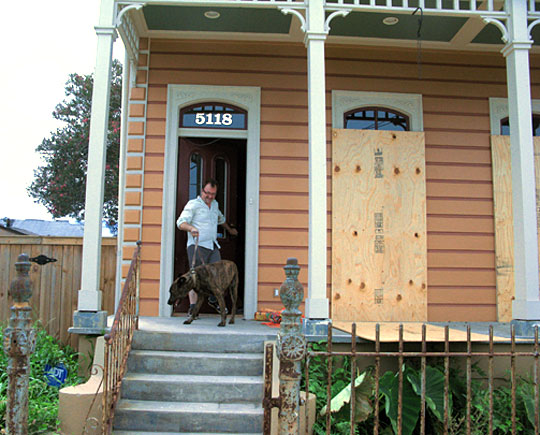 Ken Foster, shown with his dog Brando, was one of the last ones to leave New Orleans' Lower Ninth Ward on Sunday.

Authorities in the Gulf Coast region report that mandatory evacuations ordered as Hurricane Gustav advances have been successful. By all accounts, the preparations for Gustav are a stark improvement over the chaos before and after Katrina.

In fact, if hurricanes can teach a lesson, Katrina provided a master class of how not to handle a storm, and Gustav offers a glimpse of the right way to prepare for a big one.

Peggy Barcelona and her family were caging their menagerie Sunday as they prepared to flee their century-old house in St. Bernard Parish and drive to Mississippi, out of harm's way.

"We have four dachshunds, a shepherd, a lab, three cats, a ferret, a bird. And we have two horses we sent on already," she said.

But the sickening deja vu of waking up to another mass evacuation — and TV ads for companies that dry out waterlogged carpets — was just too much for some people.

"When I woke up this morning, I was completely immobilized with anxiety. I mean, I was like laying there thinking like, 'Oh my God, I'm not going to even get out of bed,'" said Ken Foster, a 43-year-old writer who lives in the Lower Ninth Ward with his three dogs, Zephyr, Sula and Brando.

He was one of the last ones to leave the Lower Ninth on Sunday, whipsawing between optimism and despair.

"I think a lot of people are feeling the same way. ... Half your head is thinking we've gone through this before. We know better what to do, how to prepare. And the other half is thinking about how bad it can really be, and how there's little to prepare for when you're dealing with that much unknown," he said.

Foster's next-door neighbor is a contractor named Derwin Hill. At the same time Foster was putting his dogs in his car, Hill was about to lock up his newly renovated Ninth Ward home. He was taking all the family pictures and his wife's jewelry with him, and he planned to stow his belongings in the house higher in case the water started to rise again.

"This time we put all the clothes in the attic, we took all the pots out and set them on the counter. We did all the preparations inside the home, as well as outside the home. Because we know if we get any water this time, hopefully it'll just be rainwater, street flooding," he said.

Hill said this time he's confident the new levees on the Industrial Canal protecting the Ninth Ward will hold and, more importantly, there are no barges on the water to break free and slam into the dike, as happened before.

In another departure from pre-Katrina activity, Humvees full of National Guardsmen lumbered through the silent streets on Sunday.

Marty Rollins was installing a storm door in the Phoenix Tavern on Elysian Fields Avenue, where he tends bar.

"They're handling it much better," he said. "They seem like they learned a lot from the first one."

People have had particular praise for their new take-charge governor, Bobby Jindal. In comparison to the image of a rattled, indecisive Gov. Kathleen Blanco after Katrina, Jindal has been all over television relishing his new role as commander-in-chief of Louisiana's National Guard.

Despite public officials pleading for residents to leave, some people just didn't want to miss a good show.

"This will be my first real hurricane to go through," said New Jersey native Chris Maverick. "My family all wants me to leave. My friends are home and they're all like, 'Dude, you're crazy.' And I was like, this is a life experience I have to go through."

He sat on a front stoop in the Marigny neighborhood drinking a Pabst Blue Ribbon and smoking a Winston. The 26-year-old with bright red, dyed hair said he's a bartender on Bourbon Street. He and five friends were riding out Gustav here, planning to pass the time playing chess and card games and drinking beer.

"I didn't come here a year ago to move away every time everything gets a little blustery," he said. "Too many people in this world run from everything. It's like the American solution, let's just run away when there's a problem. I'm ready to confront."

In now-empty post-Katrina New Orleans, there are apparently very few who share his bravado.