Accessibility links
New Orleans' Levees Withstand Nudge From Gustav In New Orleans, there is a sense of relief that Hurricane Gustav didn't roar ashore as hard as it could have. The city avoided a direct hit, and its improved levee system has held.

In New Orleans, there is a sense of relief that Hurricane Gustav didn't roar ashore as hard as it could have. The city avoided a direct hit, and its improved levee system has held.

New Orleans residents got another reminder that their lives could change in a day, but when they return to their empty city this time around they should find most things just about the same. Hurricane Gustav passed by New Orleans, and NPR's John Burnett, who's on the line. John, good morning.

INSKEEP: Let's talk about the situations you do have to think about if you have an empty city. How's security?

BURNETT: Security is impressive. There are about 1,500 New Orleans police that are patrolling the streets constantly with their blue lights blinking, another 1,500 National Guard. We heard last night at a press conference, amazingly, they've made only two arrests in the last 24 hours. That was as of about eight o'clock last night - one for the looting of a gas station here in uptown New Orleans, the other for a citizen who stole gasoline. And really, there are just very, very few people in town. As we know, the evacuation was really successful. And also, just a lot of private security going on.

I know driving in the streets, everyone who has stayed back in their houses is heavily armed. Yesterday, we talked to a couple, they were sipping champagne with a 9 mm strapped to this waist.

INSKEEP: It's a very stylish way to sip champagne.

BURNETT: It really is. It's very New Orleans style.

INSKEEP: Well, let's talk about a different kind of security: security from the water. Many of us spent time yesterday looking at that video of water splashing over a retaining wall, over a levee. Has everything held?

BURNETT: As of now, everything has held, and there was enormous relief in the voices of city officials last night, that even as you saw those waves splashing over the top of the Industrial Canal, the floodwalls held, some of which were new since Katrina. We heard from Mayor Ray Nagin last night at this press conference in city hall, and this is what he had to say.

Mayor RAY NAGIN (New Orleans, Louisiana): I was hoping that this would happen, that we would be able to stand before America and before everyone and say that we had some successes with the levee system. I feel really good about it. Now, what did it prove? It proved that the city can handle a Category 3 storm, that have winds of Category 3 that hit us and then dropped down to a Category 2. Is that good enough? No.

BURNETT: And so what he meant is that the city still needs to push the Army Corps of Engineers to complete all the work that they had going on before Gustav for the 100-year storm protection system and to complete the wetlands restoration.

BURNETT: And that's the big question: When came people come home? This turned out to be such a small storm, really only tropical storm-force winds here in the city. Everyone's going to be very anxious to get back, and mindful that it took weeks and weeks and sometimes months to get back after Katrina.

The mayor last night assured them that it would be a matter of days, not weeks. But he said there's a lot to do now. There are still live wires down in the street. I'm looking out over a darkened city right now from the front window of the NPR bureau. Power is still out to almost - more than half of this city. The streets still have quite a bit of debris, a lot of big oak limbs down. Hospitals are on skeleton crews.

And so, in order to get citizens back, they're going to have to bring this city back. And that's still going to take them a few days.

INSKEEP: Well, very briefly, are officials now essentially taking the attitude we know how to handle a hurricane now?

BURNETT: Well, that's a really interesting question because there were some officials last night at the press conference that said we're concerned now because this ended up to be such a small storm, that the old complacency will be back.

The first storm after Katrina, we sort of expected there would be good evacuation. But now those who stayed home and decided to ride it out are feeling kind of smug that this wasn't too bad after all. And so how do they get people's attention the next time a storm approaches New Orleans?

INSKEEP: Okay. John, thanks very much. 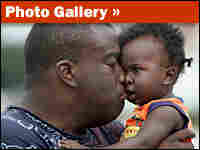 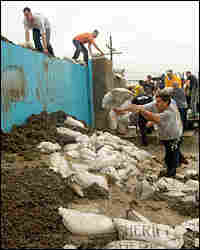 Prisoners and others work on stopping the flooding underneath a floodgate at the St. Bernard Parish and Plaquemines Parish border, Sept. 1, 2008, in the wake of Hurricane Gustav. Matthew Hinton/AFP/Getty Images hide caption 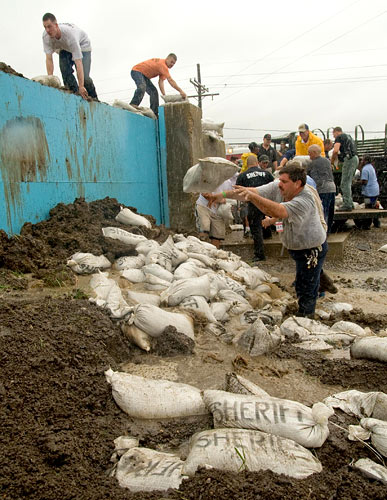 Prisoners and others work on stopping the flooding underneath a floodgate at the St. Bernard Parish and Plaquemines Parish border, Sept. 1, 2008, in the wake of Hurricane Gustav.

If a city could breathe a sigh of relief, New Orleans would be doing that now. Bracing for what Mayor Ray Nagin had said would be the "storm of the century," local, state and federal authorities directed one of the nation's largest exoduses, getting some 2 million people along the Gulf Coast out of the path of Hurricane Gustav over the course of 2 1/2 days.

Now the task is to get them all home.

The city's evacuees are scattered across the country and naturally are eager to return to survey the damage. Nagin has asked them to hold off and stay in shelters and motels for a few more days. He wants officials to fan out and assess the storm's effects first. While the levees and flood walls seem to have done what they needed to do — a far cry from what happened three years ago during Hurricane Katrina — there is other storm damage.

The city remains under a mandatory evacuation order and curfew. Power lines are down all over the city, and electricity is out in some 80,000 homes in New Orleans. Some 35 substations are believed to be out of service. The city's sewer system also took a hit.

Nagin wants time to fix those problems before residents start back. He said a return home was "only days away, not weeks," and he hoped residents could begin to flow back to the city Wednesday or Thursday. "[At] the latest Thursday we'll start letting our citizens arrive," Nagin told CNN on Tuesday morning.

"We're just going to reverse the process; once we give them the word, the same process will get them back," Nagin said, adding that buses, trains and planes would be available to drop off returning residents. "We'll provide them all the assistance they need to get them back efficiently and effectively."

Retailers and employers will be allowed to send workers to check on the damage to their establishments Wednesday, the mayor said.

"I would not do a thing differently," the mayor said Monday night. "I'd probably call Gustav, instead of the mother of all storms, maybe the mother-in-law or the ugly sister of all storms."

Gustav is now a tropical depression moving across Louisiana, with maximum sustained winds near 35 mph, the National Hurricane Center said. That's a far cry from Monday, when Gustav made landfall as a Category 2 storm with sustained winds of 110 mph.

Lt. Gen. Robert Van Antwerp, the commanding general of the U.S. Army Corps of Engineers in New Orleans, said Tuesday that the city "dodged a bullet."

"The water has gone down in the Industrial Canal considerably," Van Antwerp told NPR's Renee Montagne, referring to the 5.5-mile stretch of water connecting the Mississippi River to Lake Pontchartrain. He said the water is down some 8 to 10 feet from what it was during the height of the storm Monday.

Van Antwerp said he was satisfied with the way the levees and flood walls performed, particularly given that the Army Corps of Engineers is only halfway through a six-year reconstruction effort in New Orleans. The levees could never be foolproof and fully protect the city, he said.

"I don't use the word protection; I use the word risk reduction," he said. "If this had been a Category 5 with a surge of 15 to 20 feet, there is no way you can protect against that. There are always vulnerabilities."

Louisiana Gov. Bobby Jindal said it could be a couple of days before oil and natural gas companies can fully assess Gustav's impact on drilling and refining operations. He said as much as 20 percent of the oil and gas production that was put on hold because of Gustav could be restored by this weekend.

In a news release, the Shell Oil Co. said it planned to start redeploying skeleton crews to some of its operations in the Western part of the Gulf of Mexico on Tuesday morning and to some of the eastern rigs later Tuesday afternoon, though those plans are subject to weather and road access, the company said.

The Gulf accounts for about a quarter of U.S. domestic oil production and about 15 percent of natural gas output. The concern is that damage to those installations could cause a spike in gasoline prices.

Oil prices actually dropped by $4 a barrel, closing at $111 on Monday. Idustry officials say they were prepared for worse and are feeling lucky.