Accessibility links
Distractions Mark GOP Convention's First Day Republicans opened their storm-shortened national convention Monday amid distractions involving running mate Sarah Palin. It was disclosed that a lawyer was hired to represent the Alaska governor in a firing investigation, and that her 17-year-old daughter is pregnant.

Republicans opened their storm-shortened national convention Monday amid distractions involving running mate Sarah Palin. It was disclosed that a lawyer had been hired to represent the Alaska governor in an investigation of her firing of the state's public safety commissioner. The other disclosure was personal — the pregnancy of her 17-year-old unmarried daughter.

The announcement that Sarah Palin's unmarried, 17-year-old daughter, Bristol, is pregnant, came in a statement released by the McCain campaign. The statement, made in Sarah and Todd Palin's name, said:

"We have been blessed with five wonderful children who we love with all our heart and mean everything to us. Our beautiful daughter, Bristol, came to us with news that as parents we knew would make her grow up faster than we had ever planned. We're proud of Bristol's decision to have her baby and even prouder to become grandparents. As Bristol faces the responsibilities of adulthood, she knows she has our unconditional love and support.

"Bristol and the young man she will marry are going to realize very quickly the difficulties of raising a child, which is why they will have the love and support of our entire family. We ask the media to respect our daughter and Levi's privacy as has always been the tradition of children of candidates." 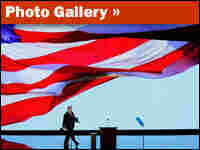 On Monday, McCain visited a disaster-relief center in Waterville, Ohio, and helped pack cleaning supplies into plastic buckets that will be sent to the Gulf Coast area. Joe Raedle/Getty Images hide caption 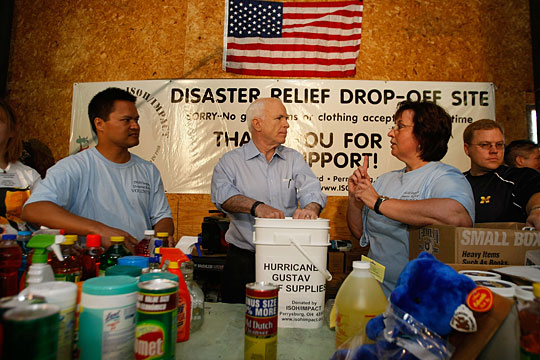 On Monday, McCain visited a disaster-relief center in Waterville, Ohio, and helped pack cleaning supplies into plastic buckets that will be sent to the Gulf Coast area. 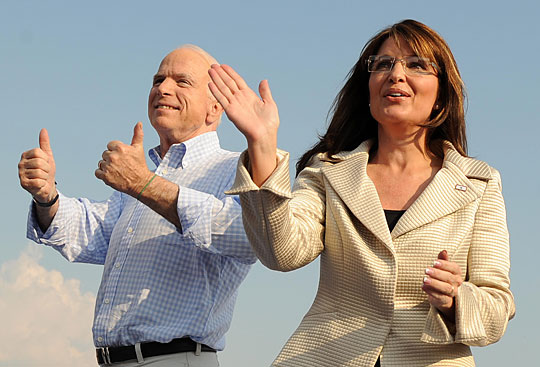 Republican officials in St. Paul, Minn., devoted the first day of their national convention to fundraising and relief efforts for victims of Hurricane Gustav, tossing aside overt political appeals in favor of requests for help scheduled by first lady Laura Bush, and Sen. John McCain's wife, Cindy.

But overshadowing activities on the floor was a surprise statement from the McCain campaign that running mate Sarah Palin's unmarried, 17-year-old daughter is pregnant.

The Associated Press reported, meanwhile, that Palin has hired an attorney to represent her in the so-called "troopergate" investigation. The Alaska legislature is investigating whether Palin improperly fired the state public safety commissioner after he refused to fire a state trooper who had divorced Palin's sister.

In her remarks, Laura Bush, who walked onto the podium at the Xcel Energy Center to a standing ovation, said the effects of the hurricane were still being measured. When such events occur, she said, "We're reminded that first, we're all Americans. Ideals will always transcend parties and partisanship. People on the Gulf Coast will know that we're here to assist them."

Mrs. Bush introduced a video of governors from Gulf Coast states who could not attend the convention because of the storm. She then returned, accompanied by Cindy McCain, who was also greeted warmly by the GOP delegates. McCain urged people to visit a Web site, www.CauseGreater.com.

"Together we can accomplish so much for those who have been affected," McCain said.

The convention opened for business Monday with adoption of rules and the party's platform. But most of the attention in St. Paul was elsewhere — on reports from the Gulf Coast, where Gustav made landfall, and on the news about Palin's daughter, Bristol, the eldest girl among her five children.

The campaign did not release the last name of the father or his age.

The McCain campaign said it was aware of Bristol's pregnancy when it named Palin as McCain's running mate on Friday. And it said it released the news in part to rebut bloggers, who had been writing that Palin's youngest son, Trig, who was born with Down syndrome in April, was actually Bristol's child.

News About The Pregnancy Spreads

The statement came on a day when it was likely to be overshadowed by news from the Gulf of Mexico.

The Anchorage Daily News reported on its Web site that it had asked Palin spokesman Bill McAlister about Bristol's pregnancy over the weekend. It said he replied he had "no evidence that Bristol's pregnant." He said he just found out Monday morning "like everyone else."

McCain announced his selection of Palin as his running mate on Friday. The response among social conservatives was enthusiastic, based in part on her self-proclaimed background as a regular "hockey mom" and her strong pro-life, pro-gun views.

Democratic presidential nominee Barack Obama, in a Michigan news conference, was asked about reports about Palin's daughter's pregnancy. He said the media should back off the story.

Obama told reporters that "people's families are off limits, and people's children are especially off limits." He said it has no bearing on Palin's performance as governor of Alaska or what kind of vice president she would be. Obama denied anyone in his campaign was responsible for spreading rumors about Palin, and added that anyone caught doing so would be fired.

James Dobson, founder of the conservative religious group Focus on the Family, issued a statement commending the Palins "for not just talking about their pro-life and pro-family values, but living them out even in the midst of trying circumstances." He added: "Being a Christian does not mean you're perfect. Nor does it mean your children are perfect. But it does mean there is forgiveness and restoration when we confess our imperfections to the Lord."

Mike Knopf, 17, a delegate from Dubuque, Iowa, said the news "reaffirms the Republican strength of family values and great ethics." He said he had "no second thoughts about [Sarah Palin] being on the ticket."

"It shows that they've got normal things going on in their family," added Nancy Riley, a delegate from St. Petersburg, Fla. Rep. Peter King of New York's 3rd Congressional District agreed, saying, "There's not a family in America that doesn't worry about this. It's a different world we live in today, and there are fears like that in every family."

When asked if McCain should have vetted Palin more thoroughly, King replied, "If I were going to pick, I would still pick her."

Palin arrived in St. Paul Sunday night, and is said to be working on her acceptance speech, which is still scheduled for delivery on Wednesday. But convention officials are taking a day-by-day approach to planning, which is contingent largely on events occurring some 1,200 miles south along the Gulf Coast.

McCain visited a disaster-relief center in Waterville, Ohio, helping pack cleaning supplies and other items into plastic buckets that will be sent to the Gulf Coast area. Reading from the business card of center director Linda Green, McCain said, "Each one should use whatever gift he or she has received to serve others faithfully administering God's grace in its various forms."

McCain added, "And as the hurricane strikes Louisiana as we speak, all Americans I know will be motivated by those words of serving others and using whatever gifts we have to help our fellow Americans."

Party officials say they will be assembling some 80,000 "comfort packages" with personal supplies for hurricane victims, with help from the Red Cross, Target and FedEx.

At a breakfast for the Louisiana delegation Monday, former Louisiana governor Buddy Roemer told delegates that "the early returns from Louisiana are good, to put it in political terms." But he added, "I've won and lost elections in the last hour and the same is true with hurricanes — it's not over 'til it's over."

First lady Laura Bush stopped in at a breakfast for the Texas delegation. She said she was proud that she'll get her wish to vote for a Republican woman on the presidential ticket. She also said she and President Bush had been surprised by McCain's choice. But she said of Palin, "We know what kind of women Alaska produces. We know how tough and strong she is."

In St. Paul, thousands of anti-war demonstrators marched from a rally at the State House to the site of the Republican convention. They were closely watched by police officers wielding batons and pepper spray.