Accessibility links
'What Is Soul?' New Faces Have Answers Soul may be a full-fledged style of music or just a flavor, but whether you like it straight-up or blended with other music and innovations, there's a sense that soul is always going to be part of the mix. Newcomers Sharon Jones and Eli "Paperboy" Reed share their thoughts. 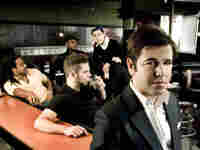 (Am I Just) Fooling Myself 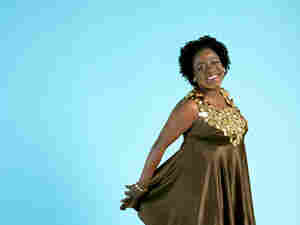 In 1971, George Clinton, singing with his band Funkadelic, posed the musical question, "What Is Soul?" "A ham hock in your cornflakes," they sang, as one possible definition. Think about it.

Today, as it was then, there's no easy answer. But if you're talking about music, soul is easy to define: It's a gritty, vocal style, filled with a feeling straight out of the black church. Soul music was born in the '50s, took over the charts in the '60s, and remains alive and well today. Soul often has horn sections and sometimes strings, but it doesn't like to be too dressed up with polished production: Soul is more about naked emotion and personal testimony.

Soul music was so prevalent by the end of the '60s that the word itself took on a world of meaning for black America. "Black people identified themselves as soul brothers and soul sisters," says Nelson George, who has been writing about African-American music and culture for more than 30 years. "There were soul shakes, soul haircuts, soul barbershops, soul food. There was a lot of soul. It was so widely used, it almost lost its meaning, quite honestly."

The triumph of Soul music meant a lot, signifying a major shift in popular musical taste in America.

"By the '60s, soul music was mainstream black pop music and became mainstream American music," George says. "Certain styles of music are incredibly connected to the times, and certainly soul music and the '60s are intertwined — things like Aretha Franklin's '(You Make Me Feel Like a) Natural Woman,'" Otis Redding's "Try A Little Tenderness." I also think that soul music gets stereotyped by the rawer stuff, and actually there's a quieter tradition from Smokey [Robinson] to Curtis Mayfield and the Delfonics. So I would say that 'La La (Means I Love You)' by the Delfonics is soul music."

Soul music has grown and changed and kept up with the times. Today, it seems to be enjoying a revival.

"You know what? It's always been here," says Sharon Jones, a gospel-trained singer who started performing soul in the '70s. "You're just hearing about it again.

Jones recently released a new album, 100 Days, 100 Nights, with her group The Dap-Kings. Her voice can be a formidable force, especially when it shifts an entire song into high gear.

Jones can sing with sweetness and grace, but she says there's a lot more to it than that. "I think when you go soul, you got to get the ugly face," she says. "Soul is singing with the ugly face."

A new arrival on the soul scene, Eli "Paperboy" Reed is only 24. But he already knows how to sing ugly.

"I was never thinking about capitalizing on some sort of soul revival," Reed says. "My music sounds the way it does 'cause everybody wears their influences on their sleeve. I was listening to 'Drown in My Own Tears' or 'Pain in My Heart' when I was 15 and... having to deal with high-school girls. For me, that was relevant."

Reed's new album, Roll with Me, is marked by a passionate precision and raw intensity.

"There's so much irony in pop music today and aloofness when it comes to audiences, especially in kids my age," Reed says. "I want [audiences], at least for the 45 minutes that you come to see me, to just get caught up in the moment and the emotionalism and let your hair down."

Eli Reed and Sharon Jones are both soul traditionalists. But, according to Jones, there's a lot of good soul singing to be found on today's R&B and pop charts.

"What some people call soul, some people call R&B," Jones says. "I feel Alicia Keys has always had a pretty strong, soulful voice, and Macy Gray is very soulful. Also, Jill Scott and Erykah Badu got her own little style going."

Nelson George has his soul favorites among today's singers. "Keyshia Cole, who's only like 23 years old, is a soul singer. Certainly Usher, and what Amy Winehouse is doing... There's a lot of artists today who access soul music as part of what they do.

"I think what happened is soul never really died," George adds. "It was overcome to some degree by changing production styles, and it's really interesting how the pendulum is swinging back. I think [it has to do with] hip-hop's dominance of black pop culture, and the de facto huge role in mainstream pop is slowly ebbing away."

"So soul music just became kind of a part of the fabric that is American music now," Reed says. "It's spread out all over every genre now."

So what is soul today: still a full-fledged style, or just a flavor? Does it matter? Whether you like it straight-up or blended with other music and innovations, there's a sense that soul is always going to be part of the mix.

Ashley Kahn is the author of A Love Supreme: The Story of John Coltrane's Signature Album.