Accessibility links
Why Alex Rodriguez Struggles In The Clutch Some players just don't seem comfortable in team sports, however talented they may be. Commentator Frank Deford says Alex Rodriguez of the New York Yankees is one such athlete, an outstanding player who nevertheless buckles under pressure to produce for his teammates.

Listen
Why Alex Rodriguez Struggles In The Clutch 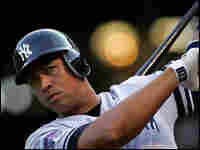 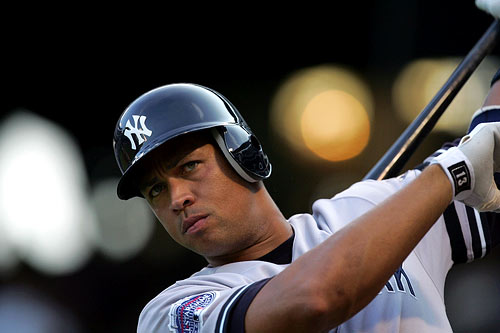 Maybe Alex Rodriguez just shouldn't have been a baseball player.

Rationally, we assume that it is much more agonizing to play an individual sport, where you can expect no help from any teammates, where you must depend completely upon yourself.

But I believe that there are certain team players with the personality that turns that logic upside down, who suffer more pressure precisely because they are not alone, who are intimidated more by having to produce for their teammates.

No one, to my mind, fits that template better than Alex Rodriguez, who may well be the best baseball player on Earth.

Only maybe he just shouldn't have been a baseball player.

Wilt Chamberlain was of the same mold. He was trapped in a body that made him a basketball player. A little shorter, and he would've been the happy warrior of track and field. Much shorter, he would've been a joyful race car driver.

And it works the other way round, too. As successful as, say, Phil Mickelson and Andy Roddick are now at golf and tennis, I suspect they both would've been happier and more at home, in team games, with teammates around them. Muhammad Ali and Joe Frazier were made to box. George Foreman would have been so much more in his element anchoring a defensive line with a bunch of other big, noisy lugs.

Listen, understand: I can't feel sorry for A-Rod. He makes gazillions of dollars, and all too often he just doesn't get it. It obviously drives him crazy that his teammate of lesser ability, Derek Jeter, gets the love that his Cupid tells him should be his.

But when, soon enough now, the Yankees almost surely fail to make the playoffs, A-Rod will endure the most blame. Ah yes, the chorus: A-Rod hits in games when it doesn't matter and then fails in the clutch, so he's one of those selfish losers who just cares about his own statistics; he's not a good team player.

But I think that, very possibly, the fact that he fails when it counts the most may well be for the directly opposite reason that is usually attributed to him and other athletes of his ilk. What defeats A-Rod is not mano a mano, the external pressure from the opposing pitcher; rather, it is internal, his own insecurity about coming through for his team.

I'll be curious a few years from now when some other Yankee is the superstar and Rodriguez is the second banana. I'll bet he becomes a much better clutch hitter, and the fans will cheer for dependable old reliable, A-Rod.

Or, in the best of all worlds, maybe all these years Alex Rodriguez would've spared himself a lot of angst if he'd been playing singles by himself a few miles away over in Queens, at the Billie Jean King Tennis Center, instead of being in the Bronx, at bat, with his Yankees teammates on base.