Accessibility links
Meridian Arts Ensemble: Brass With A Twist With an innovative repertoire and creative musical arrangements, the five brass players of the Meridian Arts Ensemble — and the group's new percussionist — have redefined the boundaries of the traditionally stodgy brass quintet in music that ranges from J.S. Bach to Frank Zappa. 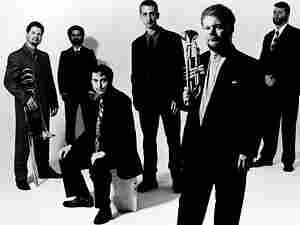 The traditional brass ensemble is made up of five players, but the Meridian Arts Ensemble is far from a traditional quintet. As part of its innovative approach, the group has expanded that configuration by adding a percussionist. Its new album is called Timbrando, a collection of music by composers from Latin America.

I've never really liked brass quintet recordings. At Christmas, sure. But most often, I find the texture too homogenized, more like a wall of sound than an interesting mesh of instruments. Then I heard this new album from the Meridian Arts Ensemble with a recorded sound in which each player finds his own musical space — such as the percussionist, who plays a marimba, heard quietly in the background in the Bachianas Brasileiras No. 5 by Brazilian composer Hector Villa-Lobos.

The piece was originally scored for soprano and eight cellos, a very different sound than a brass quintet. No way could this group bring it off, I thought. I was wrong.

This performance avoids that sameness of sound that bothers me in so many brass ensemble recordings. The musical textures here are rich without being dense, because the players have looked to the inner life of the music, delineating the counterpoint and the harmonies. I come away knowing this work better and loving it more.

Many of the works on Timbrando are in bold, contemporary styles, in which percussion plays an important role, creating shifting textures and spiky rhythms that break up the dissonant harmonies, such as in music by the Cuban composer Dafnis Prieto.

The Meridian Arts Ensemble plays in a style somewhere between jazz and classical, and often with a sense of humor, as in the deliciously edgy music from composer Tania León.

Looks like my troubles with recorded brass music are over. Now, I'm waiting for the Meridian Arts Ensemble's Christmas album, and its Easter album. I'll even take a photo album from these guys. They're that good.