Accessibility links
The 'Bechdel Rule,' Defining Pop-Culture Character Two decades ago, cartoonist Alison Bechdel spelled out a test for whether a movie was worth her time. "Yes" if: it (a) featured at least two women who (b) talk to each other about (c) something other than a man. Two decades later, what measures up? 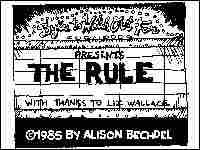 Alison Bechdel's 'The Rule' strip, from a 1985 installment of her comic Dykes to Watch Out For. (Click to read the full strip.) Alison Bechdel/Courtesy Firebrand Books hide caption 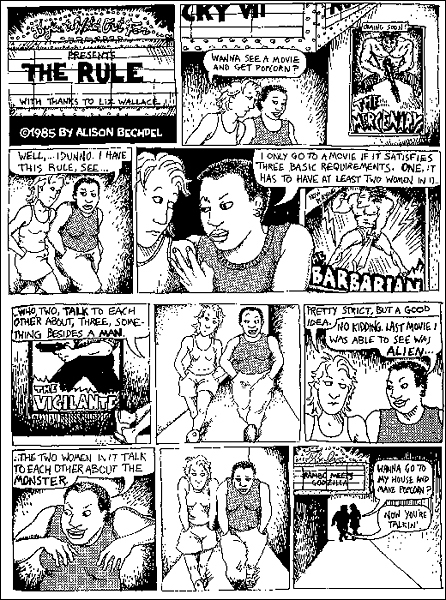 Alison Bechdel's 'The Rule' strip, from a 1985 installment of her comic Dykes to Watch Out For. (Click to read the full strip.)

The Backstory: Bechdel's Blog On The Making Of 'The Rule'

Twenty-three years ago, in a strip headlined "The Rule" (click the image at left to read the whole thing), cartoonist Alison Bechdel promoted an idea: That women on screen ought to express their real feelings about all aspects of their lives. That ultimately, the women on TV and in movies ought to be characters, not cliches.

We wanted to apply her test to the women we see on television. And we invited some experts to make up their own rules about nonwhite characters, too.

What we came up with were some thoughts about a different kind of diversity on television: not diversity in numbers, but a diversity of stories.

So listen to the audio of the All Things Considered story. Check out Bechdel's original cartoon, published in the strip Dykes to Watch Out For in 1985.

Then head over to NPR's new pop-culture blog, Monkey See, to discover more TV shows that follow "The Bechdel Rule" — and the corollaries we developed for this story: The Deggans Rule, about nonwhite characters; and The Morales Rule, about Latino stereotypes.

And give us your suggestions about where we can find more examples — more shows and movies and games that offer characters where others offer cliches.