Accessibility links
As Mayor, Palin Used Funding Ploy She Now Decries Alaska Gov. Sarah Palin, the Republican vice presidential pick, has had ties to the Alaskan Independence Party. But that didn't stop her from launching into the hunt for federal earmarks when she was mayor of Wasilla. 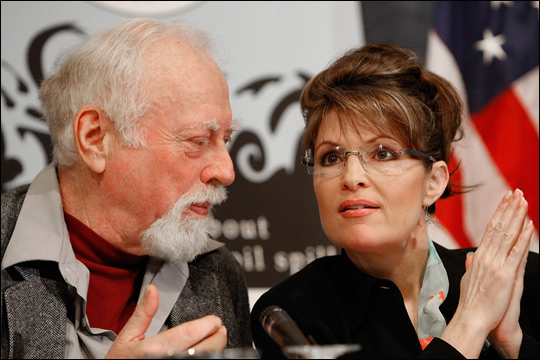 A longtime Alaska fisherman confers with Alaska Gov. Sarah Palin during a press conference with victims of the Exxon Valdez oil spill on Feb. 26, 2008 in Washington, D.C.

Gov. Sarah Palin and presidential nominee-in-waiting Sen. John McCain say they're completely in sync on getting rid of congressional earmarks — those spending items that lawmakers stick into bills to benefit their constituents and allies.

As governor of Alaska for the past 19 months, Palin knows that is a gutsy stand. The state's congressional delegation is considered Capitol Hill's gold medal team in the earmark competition.

But when McCain introduced Palin last Friday, she told the crowd that she had signed major ethics reforms and had appointed politicians from both parties to serve in her administration. "I've championed reforms to end the abuse of earmark spending by Congress," she said.

A weekend of research, however, reveals a different picture. As more details emerge about Palin, some seem at odds with the reformer image she now presents; some details even seem to be politically at odds with each other.

Under Gov. Palin, the state's quest for federal earmarks has not slackened.

Also, during her tenure as mayor of Wasilla, the city hired its first Washington lobbyist to get earmarks.

Steve Ellis is vice president of Taxpayers for Common Sense, a watchdog group that tracks the booming business of congressional earmarks.

"She [Palin] was an avid recipient of earmark dollars as mayor, and now that she's on the ticket with McCain, who is an unabashed opponent of earmarks, she's toeing that line," he says.

Taxpayers for Common Sense combed through the lobbying reports that Wasilla filed when Palin was mayor. It came up with 14 items, totaling slightly less than $27 million.

Wasilla was doing about as well at getting earmarks as Boise, Idaho, but its population is about 10,000 people whereas Boise's is about 200,000.

The cost of hiring a lobbyist for Wasilla was roughly $140,000 over four years. As Ellis points out, that's a stunning return on investment.

It didn't hurt that Wasilla's lobbyist was a former chief of staff to Alaska Sen. Ted Stevens. For much of the time that Palin was mayor, Stevens also chaired the Senate Appropriations Committee — the panel that writes the checks.

Stevens was indicted on corruption charges in July, and Palin has distanced herself from him.

Palin's quest for earmarks from Washington also seems at odds with her ties to the Alaskan Independence Party.

The AIP now claims some 13,700 registered voters, a meaningful number in sparsely populated Alaska. Over the weekend, liberal bloggers dug into the question of whether Palin ever joined the party, which contends that Alaskans ought to get another chance to decide if statehood is such a good deal for them.

The party held its 2008 convention last March. Vice Chairman Dexter Clark reminded members that they had supported Palin for governor.

Today, McCain's staff said Palin has never been a member of AIP, and they call it a "smear."

NPR asked the McCain campaign for comment, but as of Tuesday afternoon, the campaign had not responded. The campaign released state documents, in which Palin declared herself a Republican eight different times since 1990.

But AIP Chair Lynette Clark said that Palin and her husband, Todd, went to the party convention in 1996.

"Our combing of records so far goes back to 1996, and we show Todd Palin as registered with the AIP," Clark says. "But it's my understanding that she was registered and that she changed her registration in 1996."