Accessibility links
Trip To Wyoming, A Personal 50th State NPR special correspondent Susan Stamberg has visited 49 of the 50 states. For one reason or another, Wyoming was always tantalizingly out of reach. Now, as she reports in this audio postcard, she can cross the "Equality State" off her list. 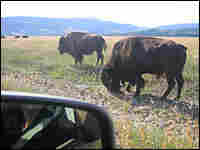 On The Roam: Buffalo show little regard for cars and passers-by. Susan Stamberg/NPR hide caption 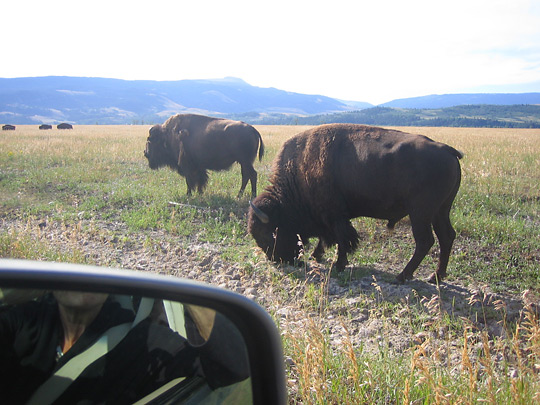 On The Roam: Buffalo show little regard for cars and passers-by.

Wyoming is my Last State Left to See. Or it was, until earlier this month, when I was — finally and euphorically — able to cross it off my To Do list. (Thanks mostly to NPR and invitations from our member stations, I'd been everywhere except Wyoming.)

And once in Wyoming, I heard words I've wanted to hear for an entire lifetime: "Howdy Ma'am."

They came from a sheriff, at a rodeo — although at first I called it a "ro-day-oh." Because, as I found myself continually explaining in Wyoming, "I'm from the East."

I landed in Jackson Hole — "not the real Wyoming," everyone said. But it's the only Wyoming I would see: a small Olde West-y town, with shop-lined boardwalk streets, a stagecoach for tourists (me, some Harley fans, some retirees) — and air, clear and crisp.

Then there are the Teton Mountains, which slam right into the sky with no foothills — juts of gray stone streaked with ice. They take your breath away.

What can also make a sightseer gasp is a herd of prehistoric-looking beasts in Grand Teton National Park. Susan Moore, who's lived in Jackson for 19 years (she's from the East, too), drove us through the park, past sagebrush, and cottonwoods - -and some big beasts.

"And this is your first buffalo right here," she said.

When asked to slow down — after all, I'd never seen a buffalo that wasn't on a coin — Moore answered, "Well, you'll see a lot more."

And we did. Whole herds of them dotted the hillsides, and moseyed onto the highway. On an ordinary American road, with all kinds of cars passing by, the buffalo just keep roaming.

There were antelope, too — all I needed was to see some deer, to have the full Home on the Range experience. But, it was too early in the day for them — deer like to come out in the early evening, it seems.

"This is where the pavement ends and the West begins," Rex said.

Riders, pickup men, rodeo royalty (a so-called Peewee Princess named Madison Wilderson) entered the arena. Then, as the crowd grew silent, Desiree Lehrer cantered around the ring, carrying the American flag. It billowed out past her pink cowgirl hat.

And in the stillness, a young girl sang the national anthem, to applause from the crowd.

Behind the Teton Range, the sun begins to set. And the mythic sport that embraces some of this country's earliest, deepest values plays out under the darkening skies.

After a while — after the bronc and bull riding, the steer roping, the barrel races — it's over.

"Ladies and gentlemen, we'll see you on down the rodeo trail," Rex said over the p/a. "Good night, good luck. May the good Lord take a liking to you. Please drive safely."

Door to door, it took 19 hours for me to get to Wyoming — air travel these days makes 1,500-pound bulls look swift. En route, stuck on some tarmac in the rain, I had been thinking, "My last state left to see — Wyoming better be worth it." Indeed it was.

Now that the domestic list is complete, it may be time to turn to the Stans: Uzbekistan, Tajikistan, Kazakstan, and the like.