Accessibility links
Mozart's 'Idomeneo,' Busting Opera's Boundaries Heading home from the Trojan War, a heroic leader makes a dangerous pact with Neptune that jeopardizes the entire community. It's Mozart's innovative Idomeneo in a production by the Bavarian State Opera.

Hear an audio introduction to 'Idomeneo'

Hear an audio introduction to 'Idomeneo'

Idomeneo (John Mark Ainsely) expresses the storm raging in his soul after making a dangerous deal with the god Neptune, in the aria "Fuor del mar."

Ilia (Juliane Banse) asks the breezes ("Zeffiretti") to fly to her beloved Idamante, to tell him of her love. 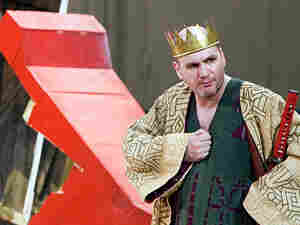 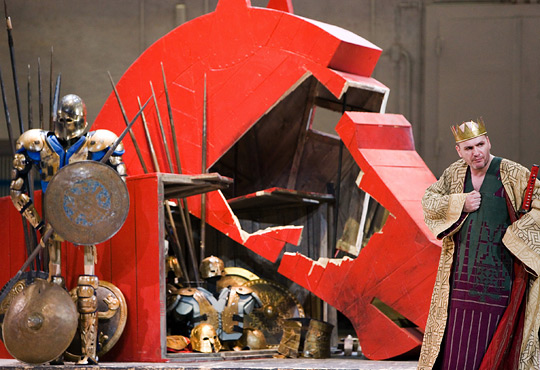 John Mark Ainsley struggles with gods, monsters and love for his son, in the title role of Mozart's Idomeneo from the Bavarian State Opera.

Like all great composers, Mozart wrote music that amazes us in ways that are almost impossible to describe--with its remarkable depth, its surprising complexity and its sheer beauty.

In fact, Mozart's seemingly effortless brilliance can make us forget that he was also one of music's greatest innovators, especially when it comes to opera.

Mozart's late operas, including Don Giovanni, combined intense drama, breezy comedy and profound insights, in a way that had never been heard before, using musical forms and techniques that were unprecedented.

But strangely, it may be an earlier, more traditional drama that first revealed Mozart's unique gift for taking the familiar, and making it extraordinary.

Late in 1780, Mozart was hard at work on a brand new opera that could easily have gone out of style before it was even finished. Idomeneo was conceived as an opera seria, a highly-stylized musical recipe that had been the "in thing" with European aristocrats for decades. And, by the time the Elector of Bavaria asked Mozart for Idomeneo, the fashion was clearly fading.

But Mozart was 24 years old, at the top of his game, and undaunted by current trends. If the elector wanted an opera seria, Mozart would write one. Using a traditional libretto based on classical myth, Mozart produced a score that surpassed the very genre it was rooted in.

In Idomeneo, the set-piece arias, dry recitatives and familiar, mythical characters are all there. But so are deeply emotional ensembles, lyrical and inventive arias, and music and characters so fresh, that in this new example of an old style, the familiar conventions burst wide open.

The opera was first heard in Munich, in 1781. That premiere was a success, but the opera had only one other performance in Mozart's lifetime, and that was in a concert version, in Vienna, in 1786. After that, Idomeneo was caught in a kind of time-warp: Its formal, 18th-century style didn't appeal to the burgeoning Romantic movement of the 19th century. When it was performed, it was in souped-up arrangements, such as the one by Richard Strauss. It wasn't until 1951 that it was again staged in its authentic form, in Glyndebourne, England. But since then, it has been pretty firmly planted in the standard repertoire.

The Story of 'Idomeneo' 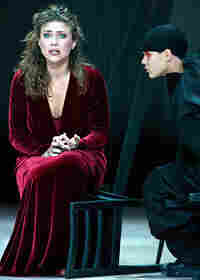 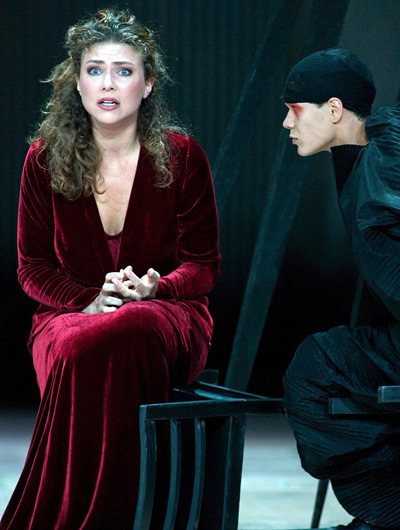 Elettra (Annette Dasch), the high-strung Greek princess, spends most of Mozart's Idomeneo in a tizzy. 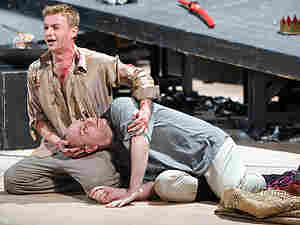 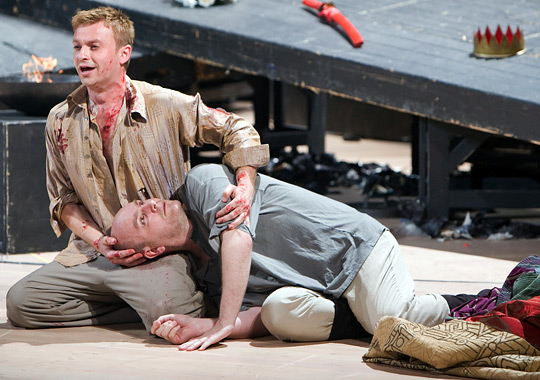 Mozart's Idomeneo is based on a story from Homer--about King Idomeneo of Crete--and takes place just after the Trojan War. ACT ONE begins as Idomeneo returns to Crete after ten years of battle. He and his army have been allied with the Greeks and have finally defeated the Trojans. Idomeneo himself has not yet reached home, but some of his forces have, and they've brought along a captured Trojan princess, named Ilia.

This opera does have a happy ending, as required by traditional opera seria, but its overall tone is tragic, right from the start. Ilia is alone in Idomeneo's palace, grieving over her father and brother, who were killed by the Greeks during the war. But while she hates Idomeneo, she has fallen in love with his son, Idamante, who led the forces that brought her to Crete.

As for Idamante, he loves her as well. But though he admits his feelings, Ilia cannot. Trying to win her over, Idamante announces the release of all Trojan prisoners, and the people celebrate. But not for long: The next character we meet is Elektra, a rather high-strung Greek princess who is also in love with Idamante. She's jealous of Ilia, and she objects to Idamante's generous behavior toward their Trojan enemies.

Idamante dismisses Elektra's shrill complaints, but the celebration is interrupted again by Idomeneo's aide Arbace, who sadly announces that the King's ship has gone down in a storm while approaching the harbor.

The scene changes to the seashore, where a terrified crowd watches the storm and prays for safety. When the storm subsides, the crowd scatters, and we finally meet the title character, King Idomeneo, stumbling out of the water after the shipwreck. It seems that just as he was going down for the last time, the sea-god Neptune offered to save him — on one condition. In return for his life, Idomeneo has agreed to sacrifice the first person he meets after reaching the safety of land. In a typical, opera seria coincidence, that person is his own son, Idamante. At first they don't recognize each other. Eventually, when Idomeneo finally realizes who he must now kill, he runs off in a panic, leaving his son thoroughly confused.

As ACT TWO opens, Idomeneo looks for advice from his friend Arbace, who thinks Idamante can be spared if Idomeneo quickly sends him into exile. After all, if he can't be found, how can he be killed? Idamante will be sent to Greece, along with Elektra.

Idomeneo meets with Ilia, who hopes that his miraculous return means that they can all mend their differences, allowing her to get even closer to Idamante. This leaves Idomeneo more confused than ever. He has unwittingly sworn to kill his son, and now this enemy princess is acting like they're all one big happy family.

Nevertheless, Idomeneo proceeds with his plan to send Idamante into exile. And that's just fine with Elektra, who is more than happy to go off with Idamante and leave Ilia behind. But there's somebody who doesn't like the idea. The powerful sea-god Neptune expects Idomeneo to live up to his side of the bargain. As the ship bearing Idamante prepares to leave, Neptune whips up another storm, and throws in an enormous, bloodthirsty sea-serpent for good measure.

Idamante's ship is stuck in port, and the people are terrified. Idomeneo finally admits to his subjects that this whole mess is his fault, but without giving them all the messy details. The act ends in uncertainty — with the King in a quandary and his people running for cover.

ACT THREE opens with the sea monster, now on shore, laying waste to property and people. Sitting in the royal garden, the Trojan princess Ilia sings of her love for Idamante. When he appears, it's to tell her that he has to go off to fight the monster.

Then Idomeneo and Elektra arrive. Idamante asks his father why he must be exiled. Idomeneo tersely replies that it's because it's good for him: Young people need to get away, to grow up. Elektra, meanwhile, is furious that Idamante has eyes only for Ilia. The four characters sing of their different emotions in a beautiful and stirring quartet.

In the next scene, Idomeneo's confidante Arbace appears, reporting that all hell is breaking loose in the countryside, and unless Idomeneo fulfills his promise to Neptune and sacrifices his son, Crete will be destroyed. Reluctantly, Idomeneo gives in, and tells his people what his bargain with Neptune is really all about. They're horrified, but a deal's a deal, and nobody wants to be eaten by the monster. According to custom, they begin to prepare the ritual sacrifice.

Suddenly, Idamante rushes in to say that he has killed the monster. But that only solves part of the problem; Neptune is still demanding his life. Idamante finally realizes what's been going on. In turn, both he and Ilia bravely offer to sacrifice themselves. With so much selflessness on display, Idomeneo and the High Priest wonder if they can somehow reach an agreement with Neptune.

As they're mulling things over, the voice of Neptune bellows forth. He agrees to release Idomeneo from his terrible promise, on one condition: Idomeneo must abdicate the throne, and leave the rule of Crete to his son, Idamante, and his beloved, Ilia.

Everyone is thrilled with this turn of events and they all give thanks to Neptune. Everyone, that is, except Elektra. She's still in love with Idamante, and now just wants to die. The opera ends as the people call upon the god of love to bless Idamante and Ilia, and to bring them all peace.