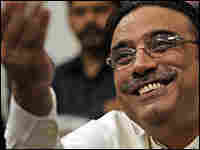 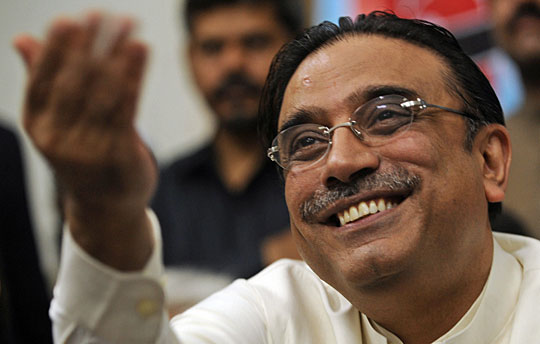 The widower of former Pakistani Prime Minister Benazir Bhutto, Asif Ali Zardari, is running for president, despite a controversial background.

The widower of former Pakistani Prime Minister Benazir Bhutto could become the country's next president when parliament votes on Saturday.

But if he does, Asif Ali Zardari will have to overcome a career lashed by allegations of corruption, extortion, murder and mental illness. Though he has never been convicted in Pakistan, Zardari has spent more than a decade in prison on various charges.

Zardari and his son, Bilawal, became co-leaders of Benazir Bhutto's Pakistan People's Party, the PPP, after she was assassinated by a bomb blast in December 2007. The party won the most seats in a parliamentary election in February, and Zardari was able to form a coalition government with his wife's former rival, former Pakistan Prime Minister Nawaz Sharif.

The coalition came unglued just five months later, after President Pervez Musharraf stepped down under threat of impeachment. Sharif pulled his party out of the government after Zardari failed to keep a pledge to reinstate more than 60 judges who were fired by Musharraf last year.

Zardari then filed to run for president in the vote set for Sept. 6. Pakistan's president is chosen by parliament and the country's four regional assemblies. Zardari's spokesman said he has the votes to defeat two other candidates for the post.

Through much of his career, the 53-year-old Zardari would have seemed an unlikely candidate for president. He grew up in Karachi, the son of a prominent Pakistani politician. Before his marriage to Bhutto in 1987, he was known for little more than his successes as a polo player.

During his wife's two terms as prime minister, Zardari was dubbed "Mr. 10 Percent," based on allegations that he demanded that percentage from businessmen seeking government contracts.

In 1990, Zardari was accused in an extortion plot, in which he allegedly strapped a bomb to the leg of a businessman, threatening to set it off by remote control if the man didn't withdraw payoff money from his bank account. Zardari was arrested, but never tried. He was released from prison after the PPP won elections in 1993.

Zardari was arrested again in 1997 on charges that included instigating the assassination of his brother-in-law, Mir Murtaza Bhutto. He was also charged with corruption, including taking millions of dollars in bribes for military contracts and helping to give a gold dealer a monopoly on importing gold into Pakistan.

None of these charges was ever tested in a Pakistani court, but Zardari spent another eight years in prison, during which, he says, he was tortured. In the meantime, a money-laundering case against Zardari and Benazir Bhutto made its way through the Swiss courts, alleging that the two had passed tens of millions of dollars through Swiss banks in an effort to conceal the fact that the money came from bribes.

Cases Have Been Dropped

In August of this year, the case was dropped, and a Swiss court released about $60 million in Zardari's assets that had been frozen. The court said Pakistan's government had withdrawn its request for judicial assistance from Switzerland. The returned money raised new questions about Zardari's financial dealings, and why he had failed to disclose those assets or pay taxes on them.

Investigations of Zardari and Bhutto's involvement in contracting have also been launched in France and Poland.

Opponents claim that Zardari has been reluctant to reinstate fired judges because he fears that an independent judiciary will pursue the corruption charges against him.

Zardari's supporters say that all the charges against him were politically motivated, first as an effort to discredit his wife, Benazir Bhutto, and later as a means of keeping him from rising to political prominence himself. They say he has proven to be a remarkably astute leader, guiding the PPP through the chaotic period after Bhutto's murder.

Efforts to forestall a corruption probe against Zardari in England led to the disclosure that he was diagnosed in 2007 as suffering from mild dementia, depression and post-traumatic stress syndrome. The diagnoses, made by two New York psychiatrists, were included in court documents filed by Zardari's lawyers with the English High Court.

A spokesman for Zardari later told the Times of London that Zardari had made a full recovery and received a clean bill of health after recent medical tests.