Accessibility links
Young Jeezy's 'Recession' Pushes Hope On his new album, Young Jeezy uses his motivational rasp to raise the spirits of people facing rising gas prices and unemployment rates. Though he's not a great rapper by traditional standards, the young Atlanta MC pads his raps with what he does best: big, clunky punchlines and inspirational refrains. 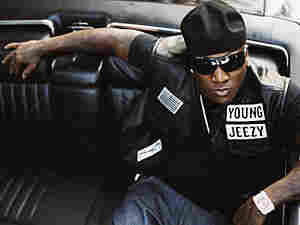 On 2005's Let's Get It: Thug Motivation 101, Young Jeezy positioned himself as a sort of Curtis Mayfield for drug dealers, urging his listeners to keep on pushing. But Jeezy's motivational efforts resonated well beyond his target audience. Even Olympic swimmer Michael Phelps cited Jeezy's music as inspiration for his streak of eight gold medals. So it's somewhat unexpected that The Recession, his third full length, is as grim as its title suggests.

Jeezy's hyper-extended rasp remains — to him, "yeah" is a four-syllable word — and his in-house production team continues to refine its grandiose synth beats (think Vangelis with a fetish for trunk-rattling bass). But the earlier refrain of by-the-bootstraps money-making has taken a somber turn. Jeezy has apparently come to the realization that most of his listeners are more likely to hit the kitchen lights to the sight of cockroaches than the marble floors he bragged of on his debut. This new agenda is best articulated in the soulful "Circulate," in which Jeezy laments rising gas prices and unemployment rates alongside vocal samples of Billy Paul's prescient 1975 album cut "Let the Dollar Circulate". As a multi-platinum artist, Jeezy himself probably isn't personally facing any hard economic woes, and he acknowledges this with a hint of regret: "Looking at my watch like it's a bad investment."

But The Recession is not a top-to-bottom sociopolitical treatise. To hear him tell it, Jeezy is "way too intelligent to play up [his] intelligence," which is to say he knows his limitations. He's not a great rapper by traditional standards, so he pads his message raps with what he does best: big, clunky punchlines and inspirational refrains. The difference on this album is that he's turned them outward. Where he once encouraged individual success, he now responds to collective failure: "It's a recession / Everybody's broke / So I just came back / to give everybody hope." Though frustrated, Jeezy remains a strident optimist.