Accessibility links
Pageant Protest Sparked Bra-Burning Myth Think the feminists who protested the 1968 Miss America pageant in the name of women's liberation burned their bras? Think again. No bras were set aflame that September day. But the idea that they were helped launch the movement onto the national stage. 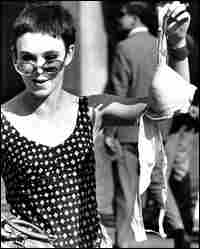 An unidentified protester drops a bra into the trash. The women did not burn their undergarments, contrary to popular belief. AP hide caption 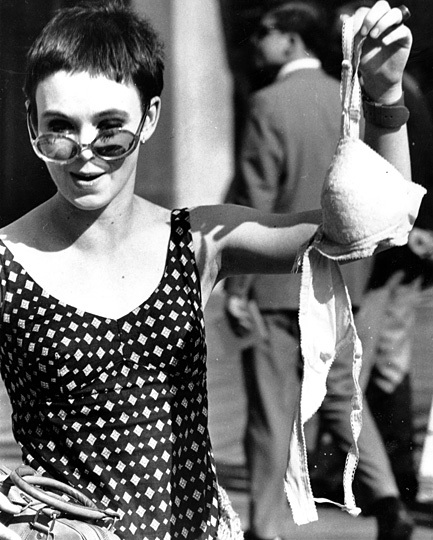 An unidentified protester drops a bra into the trash. The women did not burn their undergarments, contrary to popular belief.

A press release announcing the protest says that Miss America is a "walking commercial" for sponsors and represents a bland, mediocre ideal — as well as eight other criticisms of the beauty pageant. The release also warns that "male reporters will be refused interviews." Read the release.

Snodgrass explains why she was offended by the protesters 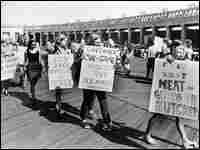 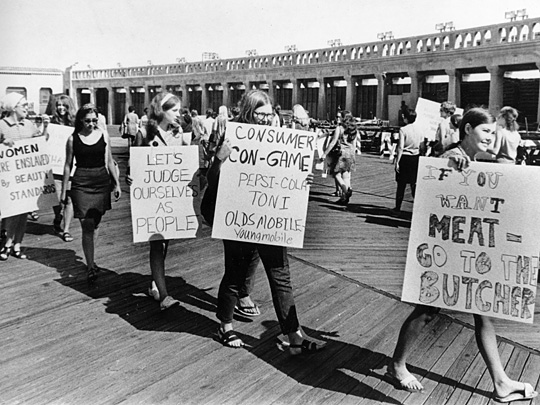 Feminists at the 1968 Miss America pageant marched with signs and crowned a live sheep.

As a small group of feminists prepared to launch their emerging women's liberation movement onto the national stage by protesting the 1968 Miss America pageant, they had no idea that the media was about to give them a new moniker: "bra burners."

In reality, no bras were actually burned on the boardwalk in front of the Atlantic City convention hall that hosted the Miss America pageant, says Carol Hanisch, one of the organizers of the protest.

"We had intended to burn it, but the police department, since we were on the boardwalk, wouldn't let us do the burning," says Hanisch. A New York Post story on the protest included a reference to bra burning as a way to link the movement to war protesters burning draft cards.

Women threw bras, mops, girdles, pots and pans, and Playboy magazines — items they called "instruments of female torture" — into a big garbage can.

"The media picked up on the bra part," Hanisch says. "I often say that if they had called us 'girdle burners,' every woman in America would have run to join us."

Hanisch was part of a small group called New York Radical Women, one of the first feminist organizations formed during the 1960s. The group wanted to use the protest techniques of the civil rights movement to promote the new idea of women's liberation.

Hanisch says she got the idea to target the Miss America pageant after one group meeting, when they discussed a movie about how beauty standards oppressed women. The movie showed clips of Miss America parading in her swimsuit.

"It got me thinking that protesting the pageant might be a good way to launch the movement into the public consciousness," Hanisch says. "Because up until this time, we hadn't done a lot of actions yet. We were a very small movement. It was kind of a gutsy thing to do. Miss America was this 'American pie' icon. Who would dare criticize this?"

Back then, the pageant drew millions of viewers and was a major television event. Alix Kates Shulman, another organizer of the protest, remembers that she always used to watch it as a little girl.

"When I was growing up, Miss America was the symbol of what every young girl wanted to be," she says. "That was the kind of attainment that everybody yearned for, to be considered beautiful. There was nothing else. That was the biggest thing."

The protesters went to Atlantic City in cars and rented buses. Women came from around the country to gather on the boardwalk on what turned out to be a beautiful September day.

"Huge crowds gathered for the picketing," says Kathie Sarachild, another member of New York Radical Women. "People were grabbing our fliers out of our hands."

Besides marching with signs, passing out pamphlets and throwing the "instruments of female torture" into the trash, the protesters also crowned a live sheep and compared the beauty pageant to livestock competitions at county fairs.

Debra Barnes Snodgrass, who had been crowned Miss America the year before and was in Atlantic City to pass the crown to her successor, saw the protesters when she arrived to prepare for the televised pageant.

"We noticed it when we began to go into the convention hall, when we arrived for rehearsals and things, and the protest was going on," Snodgrass says.

She doesn't remember discussing it much with the other women involved in the pageant. "I didn't think it was a very serious thing," she says. "It was a bit of a distraction, but not much. We were so riveted on what we were supposed to do inside of the convention hall."

They weren't the only ones. The protesters were also focused on what they planned to do inside.

Shouts From The Balcony

Shulman had written a check from the joint account she shared with her husband to buy tickets to the pageant — a bold move, because he probably would not have approved of the purchase.

A small group of women left the boardwalk to enter the hall as the show began.

Then, toward the end of the show, when Snodgrass began to give her farewell speech, the protesters moved to the balcony and hung up a banner. It was a bed sheet that said "Women's Liberation."

And they started shouting.

"I think we got in at least half a dozen shouts of 'women's liberation' and 'No more Miss America!'" Sarachild says.

Then the police came and hustled them out the door.

Although television cameras didn't show the protesters, newspapers all around the country covered the protest. "I think it kind of made the phrase 'women's liberation' a household term," Sarachild says.

The protesters say they felt somewhat bad about spoiling a woman's moment in the spotlight by interrupting her speech, and they stress that they did not want to attack Miss America as a person.

"We wanted Miss America to come and join us," Shulman says.

That wasn't going to happen, says Snodgrass. "I would never have joined with that at all. I had a very high ideal of the Miss America pageant — that it was a scholarship pageant and not a beauty pageant."

Snodgrass felt that the protesters were trying to diminish the accomplishments of thousands of competitors in the pageant, all of whom were attending school and had worked hard to develop their talents.

Looking back on the events of 1968, however, Snodgrass says she now has a better understanding of what the women's liberation movement was actually about.

"I see that I have reaped some of the benefits of what they were trying to say," Snodgrass says. "I think it was a poor choice to try to say it in that way. But I can get a charge card myself. I don't have to have a husband sign for that."

Still, the women who organized the protest say that a lot more remains to be done. They point to things like pay inequality between men and women, as well as how women tend to do most of the household work and caregiving for children and elders. They point to other countries that have better parental leave and childcare options.

But they lament that American women today don't seem to be in an organizing mood.

"As individuals, women are struggling. But the price is very heavy when you struggle as an individual. The problem with individual struggle is that it doesn't work. It's ineffective," Sarachild says.

"Young women have come through the doors that our generation opened, but I don't think they're grasping their situation any more than we did before we began to grasp ours," she says. "We could certainly use another protest. If I could think of one, I would be doing it. I hope somebody does."