Accessibility links
McCain Nominated; Palin Strikes Back At Critics Alaska Gov. Sarah Palin came out swinging Wednesday night, saying she was honored to serve as running mate to John McCain, "a man who knows how tough fights are won." In the face of criticisms of her credentials to serve as VP, she attacked Democrat Barack Obama's experience.

NPR's Mara Liasson reports on the convention on 'Morning Edition' Slideshow: Day 3 Of The Republican Convention

Read transcripts and hear audio from some of Wednesday night's key speeches: 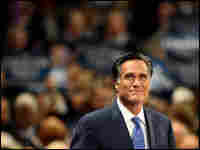 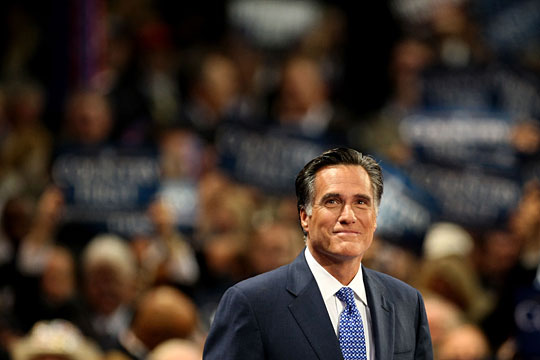 In his speech, former Massachusetts Gov. Mitt Romney says, "We need change all right — change from a liberal Washington to a conservative Washington."

John McCain was formally awarded the Republican presidential nomination Wednesday, but the night belonged to his embattled running mate, Alaska Gov. Sarah Palin, who delivered a rousing speech that electrified delegates and served notice that she will be a tough campaigner despite questions about her experience.

Palin defended her experience as mayor of a small town in Alaska before she became governor, while also taking aim at Democratic presidential nominee Barack Obama. "I guess a small-town mayor is sort of like a 'community organizer,' except that you have actual responsibilities," she said, referring to Obama's time as an organizer in Chicago.

She also challenged Obama's judgment on Iraq, saying, "Victory in Iraq is finally in sight; he wants to forfeit. Al-Qaida terrorists still plot to inflict catastrophic harm on America; he's worried that someone won't read them their rights."

McCain joined Palin and her family onstage at the conclusion of her address, telling delegates, "Don't you think we made the right choice for vice president?"

Palin becomes the first woman to accept the Republican vice presidential nomination and the first on a major-party ticket since Democrat Geraldine Ferraro ran with Walter Mondale in 1984.

The Obama campaign called Palin's speech "well-delivered" but said it was "written by George Bush's speechwriter and sounds exactly like the same divisive, partisan attacks we've heard from George Bush for the last eight years."

Palin's remarks, which brought delegates to their feet, capped a night of combative speeches from Republican heavyweights, including several of McCain's former rivals for the GOP nomination.

"[Obama] is the least experienced candidate for president of the United States in at least 100 years," former New York City Mayor Rudy Giuliani told the cheering crowd, adding, "Barack Obama has never led anything. Nothing. Nada."

Two other former presidential candidates also took to the stage: Former Govs. Mike Huckabee of Arkansas and Mitt Romney of Massachusetts. All three delivered spirited defenses of Palin's credentials to serve as vice president, while questioning Obama's qualifications to occupy the Oval Office.

Palin took the stage Wednesday night amid a barrage of criticisms and questions about her background that have swirled around her since McCain unveiled her as his running mate last Friday.

She is being investigated by a state legislative committee for her firing of the state public safety commissioner. It was discovered that she sought and won millions of dollars in federal earmarks for the town of Wasilla — where she served as mayor before winning election as governor in 2006 — before becoming an outspoken opponent of federal largess. And she backed the so-called Bridge to Nowhere before she opposed it.

The McCain campaign has lashed out at the news media for their continued investigation of Palin's background, their coverage of the pregnancy of her teen daughter, Bristol, and for questioning the vetting process that led to Palin's selection.

In her deft and at times pugnacious acceptance speech, Palin pushed past recent criticisms of her, introducing herself to voters with confidence.

She took on those in the media who have questioned her background, saying she has learned quickly in the past few days that "if you're not a member in good standing of the Washington elite, then some in the media consider a candidate unqualified for that reason alone."

"Our opponents say, again and again, that drilling will not solve all of America's energy problems — as if we all didn't know that already," Palin will say. "But the fact that drilling won't solve every problem is no excuse to do nothing at all."

She said that a McCain-Palin administration will "lay more pipelines, build more nuclear plants, create jobs with clean coal and move forward on solar, wind, geothermal and other alternative sources. We need American energy resources, brought to you by American ingenuity, and produced by American workers."

Three of McCain's former presidential rivals brought the crowd to its feet.

Giuliani, the last of the three men to speak, fired up the delegates with remarks that attacked Obama and made the argument that Palin and McCain had more experience than the Democratic nominee.

"Gov. Palin represents a new generation. She's already one of the most successful governors in America and the most popular," Giuliani said to cheers and applause. "And she's already had more executive experience than the entire Democratic ticket combined. She's been a mayor. I love that."

Giuliani added, "I'm sorry — I'm sorry that Barack Obama feels that her hometown isn't cosmopolitan enough. I'm sorry, Barack, that it's not flashy enough. Maybe they cling to religion there."

Romney, who was first to the stage, said, "We need change, all right — change from a liberal Washington to a conservative Washington! We have a prescription for every American who wants change in Washington — throw out the big government liberals and elect John McCain."

Romney also told Republican delegates that "just like you, there has never been a day when I was not proud to be an American. We inherited the greatest nation in the history of the Earth." That was a thinly veiled dig at Michelle Obama, who, as Democrats began to rally around her husband's campaign earlier this year, said she was proud of her country "for the first time in my adult life."

Huckabee joked that he was "originally hoping for the slot on Thursday called the acceptance speech. But I am delighted to speak on behalf of my second choice for the Republican nomination for president, John McCain."

Huckabee praised Obama's "historic achievement" in becoming the Democratic Party's nominee, "not because of his color, but with indifference to it." Huckabee said Obama's achievement "elevates our country." But, he said, "The presidency is not a symbolic job, and I don't believe his preparation or his plans will lift America up."

He added that Palin "got more votes running for mayor of Wasilla, Alaska, than [Democratic vice presidential nominee] Joe Biden got running for president of the United States."

Thursday night, it will be McCain's turn to deliver his acceptance speech. Aides have said the podium at the Xcel Energy Center will be reconfigured so he will be speaking in an in-the-round setting, similar to the town hall-style meetings where McCain often appears more comfortable.

McCain will be speaking after the NFL's opening season game, and he is expected to draw a large audience. He'll have the opportunity to remind voters again of his compelling personal history and his departures from GOP orthodoxy.

But coming on the heels of Palin's rousing address, McCain will have a tough act to follow.