Accessibility links
Charting McCain's Unlikely Rise To Nominee Sen. John McCain will officially become the Republican nominee Thursday, despite his at times rocky relationship with the party. Though McCain has adopted a more conservative game plan of late, he's still willing to call an audible now and then.

Sen. John McCain greets supporters at a "The Mac Is Back" rally on Jan. 7, 2008, in Keene, N.H. Mario Tama/Getty Images hide caption 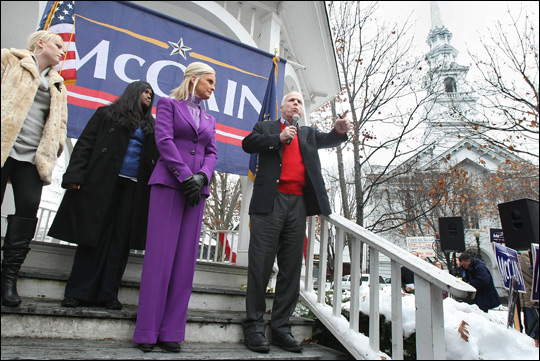 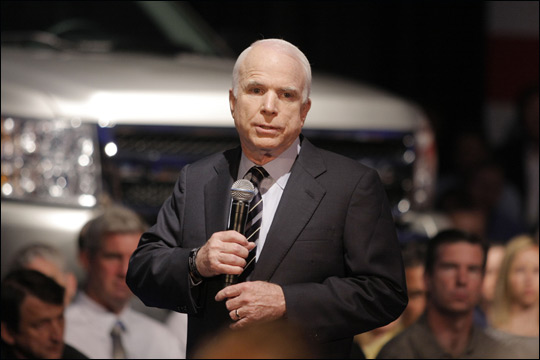 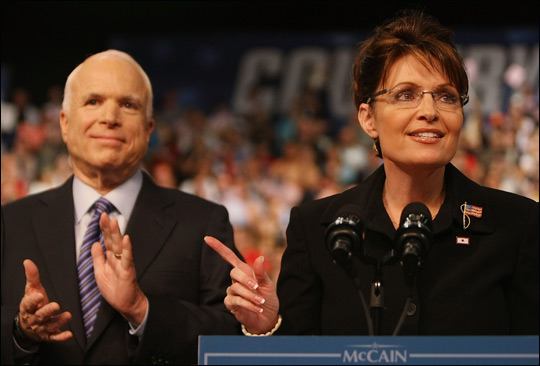 On Thursday night, Arizona Sen. John McCain officially accepts the presidential nomination from the Republicans, a party with which he's had an on-again-off-again romance.

For many party members, McCain was not so much the first choice as the last man standing. And despite his conservative voting record, the Arizona senator is best known for those times he has broken with his party. But that is probably an advantage this year — even if McCain took a rocky road to get to this convention.

A year ago this week, McCain was in the tiny town of Neola, Iowa — population 850 — for the Labor Day dedication of a veterans memorial. And as the high school bugler played "Taps," he might as well have been signaling "lights out" for McCain's own campaign.

But while other candidates focused on Iowa, McCain retooled and returned to New Hampshire, the state that launched his unlikely White House bid eight years earlier. Campaigning on a shoestring, he crisscrossed the state, holding more than 100 town hall meetings. On primary night on Jan. 8, his New Hampshire gamble paid off.

"Tonight, we sure showed them what a comeback looks like," he said to supporters.

McCain then went on to win the South Carolina and Florida primaries, followed by the biggest prizes on Super Tuesday.

His candidacy had been helped, in part, by the improving security situation in Iraq. McCain now gets more credit for supporting the troop surge and less blame for backing the war in the first place.

It also helped that Republican rivals had their own problems. Former New York City Mayor Rudy Giuliani never got out of the starting blocks. Romney suffered from charges of flip-flops and concerns about his Mormon faith. And Huckabee seemed to have no plan to build on his surprising Iowa victory. By early March, McCain had clinched the GOP nomination.

He now had a three-month head start on the Democrats, who were still fighting over their nominee. But at first, he appeared to squander the advantage and drifted around the country with no clear message. Rick Keenan, who runs a flag-making company, confronted McCain in July at a town hall meeting in Michigan.

"I'm completely committed to not voting for Barack Obama," Keenan said. "What I'm trying to do is get to a situation where I'm excited about voting for you. We want to take you to the dance. We're just concerned who you're going to go home with."

A Change In The Game Plan

In a year when the economy was issue No. 1, McCain was slow to respond to the mortgage meltdown. And his proposal for a summer gas tax holiday was widely panned.

Then, just 2 1/2 months ago, McCain hit on what's become his most popular proposal. He floated the idea in Houston and refined it over the summer to bumper-sticker brevity.

The more he talked about drilling, the better McCain did in the polls. Last month's war between Russia and Georgia also raised his profile. And just about that time, McCain ended his freewheeling, cross-country news conferences. Reporters loved these unscripted sessions in the back of his campaign bus. But they made McCain look like a senior citizen in an RV, and the proximity made it impossible for him to stay on message.

"I think we're going to be a little bit more deliberate than we have been in the amount of talking we do every day," Salter says. "But it's the NFL now. We have to up our game."

Even though McCain has now adopted a much more conservative game plan, he is still willing to call an audible every now and then.

McCain surprised nearly everyone last week when he chose the little-known governor of Alaska as his running mate. At the rally in Dayton, Ohio, at which Sarah Palin was first introduced as McCain's vice presidential pick, she said, "It's always safer in politics to avoid risk, to just kind of go along with the status quo. A ship in harbor is safe, but that's not why the ship is built."

Palin was not the "safe" choice. But McCain, the 72-year-old Navy pilot, has survived plenty of rough seas. And he's proving that, once again, he's still willing to rock the boat.