Accessibility links
Ex-POW McCain Has Supporters In Vietnam Republican presidential hopeful John McCain spent years as a prisoner of war in Vietnam. You might think people there would be less supportive of McCain because he is a conservative who backs the war in Iraq and was in the U.S. military during the Vietnam War. But McCain has a lot of supporters in Hanoi. 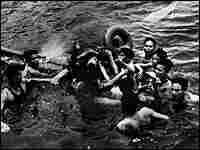 An Oct. 26, 1967, photo of John McCain being pulled from Truc Bach Lake in Vietnam after his Navy warplane was shot down. AFP/Getty Images hide caption 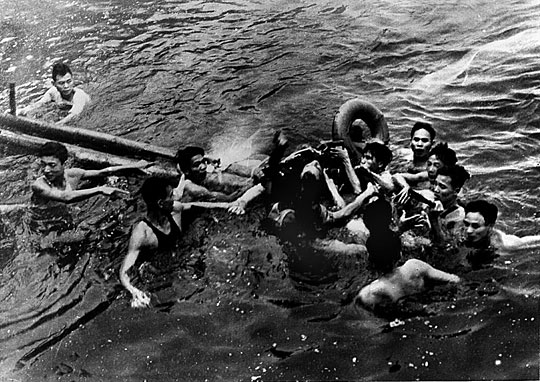 An Oct. 26, 1967, photo of John McCain being pulled from Truc Bach Lake in Vietnam after his Navy warplane was shot down.

It might be surprising that a large number of Vietnamese support John McCain — a man who was shot down over Hanoi as part of the U.S. military operation during the Vietnam War.

But these days, there are a lot of people who claim to have pulled John McCain from Truc Bach Lake 41 years ago. Some newly minted capitalists offer to tell their story for cash, but not Tran Van Tang. Tran insists he was the one who first reached McCain.

Pointing out into the lake, Tran says he saw McCain's parachute and immediately started swimming toward it while a Vietnamese anti-aircraft battery onshore fired continuously.

McCain was unconscious when he reached him, Tran says, and he grabbed McCain by the left hand — the one with a broken watch — and, with the help of others, dragged him to shore and cut the parachute away using the knife strapped to McCain's leg.

Tran says the army and police then came and took McCain away. Tran says he hopes the man he helped save — the man who has visited Vietnam many times since — becomes the next U.S. president.

"He's been in the Senate for a long time, so he has experience," Tran says. "He may have come during the war to bomb us, but in the end he was saved by the Vietnamese. And if he becomes president, I think he will remember that and create more favorable conditions for Vietnam than the other candidate."

Across town, the man who commanded the missile battery that brought down McCain's A-4 Skyhawk, Nguyen Xuan Dai, sits under a photo of himself taken with Vietnam's legendary general, Vo Nguyen Giap. The former missile battery commander, now 70, says he thinks it would be a "beautiful thing" if the man his crew brought down was trusted enough by voters to be elected president, but he is cautious of McCain's age.

"John McCain is now old," Nguyen Xuan Dai says. "Throughout the campaign he's done well, but he's not young. And I just wonder whether he can be elected."

One of McCain's jailers, Nguyen Tien Tran, now lives in a small apartment not far from the infamous "Hanoi Hilton" where McCain and other U.S. airmen were kept and tortured repeatedly, they say, by their captors.

Nguyen Tien Tran vehemently denies that John McCain or any of the others were tortured in prison, but he concedes that McCain was tough. He says he remembers going to the hospital with McCain after he was pulled from the lake with his leg and both arms broken.

Nguyen Tien Tran says he doesn't care who becomes the next U.S. president — "that's the American people's decision," he says. "But the war is in the past. The U.S. and Vietnam are friends, and we see John McCain as a friend, too."

Back at Truc Bach Lake, a dozen or so young people born after the war are drinking coffee at a lakeside cafe.

"Barack Obama doesn't have much experience in diplomacy or in foreign policy," says Nguyen Tien Nghi, a 27-year-old businessman. "He's not as strong as John McCain on these issues."

But Nguyen Tien Nghi still prefers Obama, whom he sees as a unifier and a man who appears to care more about the poor and the middle class. Nguyen's friend, 31-year-old Tuan, however, goes a step further.

"He is friendly and people oriented," Tuan says of Obama. "He seems to have a peaceful spirit and wants to unite the world — bring peace to the world, not create wars, so that's why I like Obama."

In the radio version of this story, we incorrectly said that John McCain was flying an F-4 Phantom aircraft when he was shot down over Vietnam. He was flying an A-4 Skyhawk.