Accessibility links
Eyes Turn To McCain In St. Paul And Beyond For the moment, Sarah Palin is the toast of St. Paul. But as the cool Minnesota day turns to night, the attention of the Republican National Convention swivels toward John McCain and the campaign to come.

Eyes Turn To McCain In St. Paul And Beyond

Eyes Turn To McCain In St. Paul And Beyond 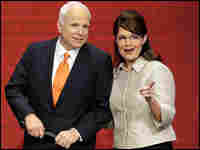 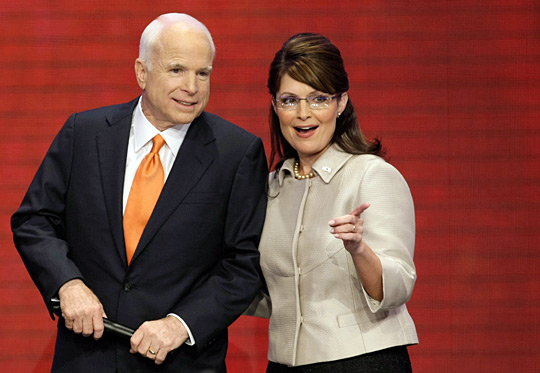 John McCain and Sarah Palin on stage at the Republican National Convention on Wednesday in St. Paul, Minn.

For the moment, Sarah Palin is the toast of St. Paul.

But as the cool Minnesota Thursday turns to night, the attention of the Republican National Convention swivels toward John McCain and the campaign to come.

On the streets of the capital city, conventioneers are wondering if McCain — scheduled to deliver his acceptance address tonight — can live up to the high standard set by vice-presidential candidate Palin.

"I hope that McCain's speech is good," says Tammi Sturm, a delegate from Houston, raising her hand high. "Expectations are way up here. Sarah Palin was awesome."

In gatherings — formal and informal — the people and the pundits are looking past St. Paul and McCain's speech tonight to November. Campaign time between conventions and the general election is shockingly short, Karl Rove tells a political forum. "About 61 days," he says.

He says that in the coming weeks, McCain has to convince voters that he understands "kitchen table" issues, such as health care and the economy. And, Rove adds, McCain has to "share his inner self."

The Republican faithfuls are bracing themselves for the inevitable backlash. For example, critics are pointing out inconsistencies in the McCain-Palin worldview. On one hand, McCain and other Republicans have stressed service to others at the convention. On the other, Palin and former New York City Mayor Rudolph Giuliani mocked the efforts of community organizers.

"I think they were just mocking the Obama people," explains John Cruz, a delegate from West Bridgewater, Mass. Dressed in khaki shorts and a Red Sox jersey, Cruz is ready to go to battle. "I'm energized," he says as he heads toward the convention center.

Rove and other Republicans are now focusing their attention on certain battleground states. This weekend, McCain will be going to Colorado, where the Democrats held their recent convention. The question is whether the Democrats gained any ground, McCain adviser Mike DuHaime says.