Accessibility links
How Best To Charm GOP? Palin Bashes Press Sarah Palin's speech didn't really prove whether the 44-year-old former small-town mayor deserved the job of vice president after just 21 months as Alaska governor. But John McCain's running mate did show she knew how to take a punch, and how to deliver one, with a sly grin. 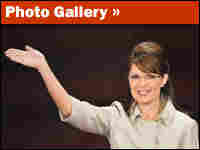 Gallery: Day 3 Of The Republican Convention

Wednesday night at the Republican National Convention belonged to straw men and a strong woman.

The strong woman was Sarah Palin.

"You know what the difference is between a hockey mom and a pit bull?" Palin asked cheering delegates. "Lipstick."

The address didn't really prove whether the 44-year-old former small-town mayor deserved the job of vice president after just 21 months as governor of Alaska. But Palin did show she knew how to take a punch, and how to deliver one, with a sly grin.

The straw men? Members of the Fourth Estate and devotees of the First Amendment, take a bow.

"I'm not a member of the permanent political establishment," Palin told Republican delegates, pausing for effect, "and I've learned quickly these last few days that if you're not in good standing of the Washington elite — then some in the media consider a candidate unqualified for that reason alone."

Palin's had a rough week, indeed, in the media. Anonymous blog postings about her months-old baby forced her to acknowledge that her unmarried teenage daughter is pregnant under circumstances that no parent and no child could want. Since few journalists outside her state knew much about her, and since her record there is, shall we say, still evolving, reporters have picked through the archives to find both true accomplishments and plenty of seeming blemishes. Her story is a work in progress.

Cindy McCain came to Palin's defense, saying coverage had been sexist. "The reporting of the past few days has proven tackier than a costume change at a Madonna concert," said former Arkansas Gov. Mike Huckabee, long a media favorite himself.

And the McCain camp put some additional steel into its stance toward the press. On Wednesday afternoon, Steve Schmidt, a senior McCain campaign adviser, issued this statement: "This vetting controversy is a faux media scandal designed to destroy the first female Republican nominee for Vice President of the United States who has never been a part of the old boys' network that has come to dominate the news establishment in this country."

He then drew a rhetorical line in the sand. (Or is it a line in the rhetorical sand? I always get that confused.) "The McCain campaign will have no further comment about our long and thorough process," Schmidt wrote. "This nonsense is over."

Which means for all the talk of sexism, the campaign seemed most livid about the challenge to McCain's judgment, not Palin's record. It wants to forestall more stories with headlines like this one in Wednesday's Washington Post: "VP Vetting: Aides Say Team Interviewed Palin Late In The Process."

But as Jake Tapper of ABC News, among others, noted, Schmidt was setting a new standard for press-politician relations. He wasn't just angered at what the media reported. He was declaring reporters' questions out of bounds, even when they didn't result in incorrect articles or any articles at all. That's a very different posture for a presidential candidate who has long courted the press and long benefited from that courtship.

Two McCain advisers seemed to go out of their way to say they thought the media's scrutiny of Palin was not sexist: former Ohio Congressman Rob Portman and eBay CEO Meg Whitman.

"We aren't persuaded that after only five days of examination, the voters already know everything they might need to know about Gov. Palin's record in office — or about how Sen. McCain picked her," McManus replied in an e-mail to Media Circus. "So we plan to keep asking questions — not about her family life, but about her qualifications."

Those in the media challenging the wisdom of the pick on Wednesday included two apparently sympathetic Republicans. Former McCain consultant Mike Murphy and conservative Wall Street Journal columnist Peggy Noonan, were caught on live mikes, but off the air, talking to NBC political director Chuck Todd.

Murphy: You know, because I come out of the blue swing state governor world: Engler, Whitman, Tommy Thompson, Mitt Romney, Jeb Bush. I mean, these guys — this is how you win a Texas race, just run it up. And it's not gonna work. And --

All three commiserated over the fate of Texas Sen. Kay Bailey Hutchinson, who was passed over in favor of Palin.

Todd: Yeah, I mean is she really the most qualified woman they could have turned to?

Noonan: The most qualified? No! I think they went for this — excuse me — political bull---- about narratives.... Every time the Republicans do that, because that's not where they live and it's not what they're good at, they blow it.

Murphy: You know what's really the worst thing about it? The greatness of McCain is no cynicism ...

Todd: And this is cynical.

This exchange whipped up no little excitement on the Interwebs Wednesday because Noonan had just taken to The Wall Street Journal opinion pages that morning to proclaim her excitement about Palin.

Noonan has now amended the top of her column to explain she didn't mean the McCain campaign was finito: "I argued, that's over, those assumptions are yesterday, the party can no longer assume that its base is utterly in line with the thinking of the American people." Noonan's full extrication of her proverbial foot from her mouth (or is it her foot from her proverbial mouth?) runs at some length.

But Palin could take care of herself. She invoked her small-town values and mocked Democratic nominee Barack Obama as an elitist without any accomplishments to his credit, seeking to drain any attacks on her own qualifications. Palin crossed party lines to allude to Democratic President Harry Truman, though she didn't mention he had been a senator for a decade before becoming vice president.

She talked of being the mother of five, most recently of a baby born with Down syndrome, and talked about the special love triggered by a special-needs child. And she also delivered a rallying cry for national security conservatives against Obama: "Al-Qaida terrorists still plot to inflict catastrophic harm on America," Pain said to growing cheers, "and he's worried that someone won't read 'em their rights!"

This fascinating statement revives a largely silent debate throughout this presidential campaign. The running mate of former naval aviator John McCain is mocking concerns that the government has decided some of its enemy combatants are not worthy of the protections of the Geneva Conventions. Four decades ago, the North Vietnamese declared McCain a pirate, not a POW, and used that rationale to torture him over a 5 1/2-year period.

But that dissonance didn't seem to faze her, either. Very little did. At a time her political future seemed entirely on the line, Wednesday night, Palin delivered red meat and apple pie.

You know what the difference is between McCain's running mate and a political pit bull?