Accessibility links
The 'Highest' Spot on Earth? : Krulwich Wonders... Mt. Everest, at 29,035 feet, is the highest spot on our planet, right? Well, if you define "highest" as "closest to outer space," there's another winner, due to a great big bulge around the equator.

Listen
The 'Highest' Spot on Earth? 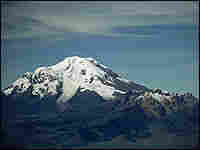 Due to a bulge around the equator, Ecuador's Mount Chimborazo is, in fact, closer to the moon and outer space than Mount Everest. Galen Rowell/Corbis hide caption 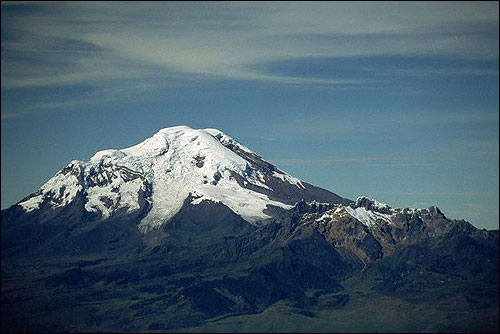 Due to a bulge around the equator, Ecuador's Mount Chimborazo is, in fact, closer to the moon and outer space than Mount Everest. 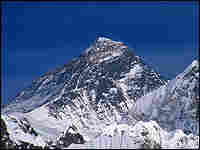 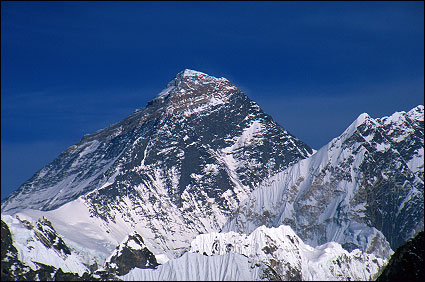 Well, we all know that Mount Everest, at 29,035 feet above sea level, is the highest spot on our planet and is likely to remain so for a long, long time... unless we think about the word "highest" in a different way.

Suppose I asked you to find the spot on Earth where you would be closest to the moon, the stars and outer space. In other words, the point on Earth that is closest to "out there."

Most of us, again, would point to Mount Everest.

But here's something you may not know: the Earth is not a perfect sphere. (And by the way, if you want to see a really, really outrageously perfect sphere, check this out.)

The Earth Isn't Perfectly Round

The Earth, it turns out, is more like a beach ball that someone sat on: It has a slightly distended middle.

Mathematicians call this an "oblate spheroid," which means there is a bulge that circles the Earth just below the equator, so anyone standing in that part of the world is already standing "higher," or closer to outer space, than people who aren't on the bulge.

Therefore people in Ecuador, Kenya, Tanzania and Indonesia are all a bit closer to the moon (not much, only about 13 miles closer) than people standing at the North and South poles.

Joseph Senne, an engineer/surveyor, did the calculations and had his numbers checked by the director of New York's Hayden Planetarium, Neil deGrasse Tyson, author of a new book on science and the cosmos, Death By Black Hole: And Other Cosmic Quandaries.

"When all the calculating is over," Senne says, "we think we have discovered the spot on Earth that is closet to the moon and outer space."

It is Mount Chimborazo in Ecuador. Yes, Ecuador.

According to Senne, Chimborazo is 1.5 miles higher than Everest! Or, if you will, 1.5 miles closer to outer space.

If you define "highest" as highest from sea level, Mount Everest is still champion.

But if you want to stand on the place on Earth that is closest to the moon, that would be Mount Chimborazo!

And as long as we're at it... using this same logic, which do you think is closer to the moon and stars, Death Valley in California or the top of Mount McKinley (also called Denali) in Alaska?

We asked David Metzler, a mountain-climbing mathematician who is also known as "Spireguy," one of Wikipedia's volunteer mountain statisticians, to do the calculations. Hear what he found.

And if you think that is wild, how about this: Which is higher, the Dead Sea (lowest point on the terrestrial Earth) or the top of Mount McKinley? Hear Spireguy's answer.