Accessibility links
Rice's Libya Trip A Signal Of Restored Ties Secretary of State Condoleezza Rice's visit to Libya comes after years of gradually easing sanctions on the country. She will be the first secretary of state to visit Libya since 1953, and experts tout the country's transformation as a foreign policy success story. 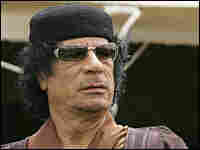 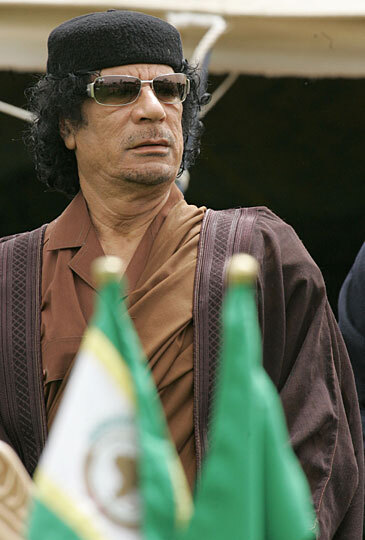 Secretary of State Condoleezza Rice is on what her aides say will be a history-making trip. She is traveling to North Africa and plans to stop Friday in Libya, a once pariah nation now being rewarded for giving up its suspect weapons programs and renouncing terrorism.

For several years now, the U.S. has been gradually lifting sanctions on Libya and restoring ties, and Rice's trip caps that effort.

When Libyan leader Moammar Gadhafi plays host to Rice on Friday, it will be the most tangible sign to date — at least among U.S. policymakers — that he has shed the image he had back in the 1980s when President Ronald Reagan bombed his compound and accused him of sponsoring terrorist attacks.

"This mad dog of the Middle East has a goal of a world revolution: Muslim fundamentalist revolution," Reagan said.

Rice's point man on the Middle East, assistant secretary of state David Welch, says the U.S. no longer uses language like that.

"We don't refer to Col. Gadhafi in those terms today," Welch says. "This is a relationship that has had a troubled past, but now it is on a much firmer foundation."

In the days leading up to Rice's trip to Libya — the first visit by a secretary of state since 1953 — State Department officials have been talking about Libya as a foreign policy success story.

Ties started warming back in 2003, when Gadhafi agreed to give up a nuclear weapons program and the U.S. started lifting sanctions on the oil rich nation. Paula DeSutter, assistant secretary of state for verification, compliance and implementation, says Gadhafi's actions should serve as a model for others.

"The secretary's visit is going to be a huge demonstration of the fact that by changing behavior, a country can change relations," DeSutter says.

Joe Cirincione, president of the Ploughshares Fund, a grant-making foundation that funds initiatives to prevent the spread and use of nuclear weapons, says the U.S. approach to Libya — where negotiations happen to change a regime's behavior — is the opposite of the Iraq model.

"The Iraq war has proved to be very difficult, costly and unnecessary," Cirincione says. "The Libya model has been cheap, 100 percent effective, and nobody died."

Cirincione says this is the right message to be sending to Iran and to North Korea, though those cases are far more complicated than Libya. Cirincione says by sending Rice to Libya, the Bush administration wants to show that regimes can survive — even prosper — if they behave by the rules.

"We've seen, under the Bush administration, Moammar Gadhafi goes from a poster child of a rogue state leader to a man that President Bush calls a model that others should follow," Cirincione says. "That is a remarkable transformation. If a Democrat did that, the Republicans would undoubtedly be accusing him of appeasement. Sometimes, it takes a Bush to go to Libya."

There was one thing that had to be worked out before the trip: Libya recently agreed with the U.S. to set up a fund to finish compensating families of the victims of two terrorist attacks, the 1988 bombing of Pan Am Flight 103 and the 1986 bombing of the La Belle discotheque in Berlin.

So far, the money is not in the fund. But Rice's aides say they expect it will be there soon. Human Rights Watch and other activists are urging her to raise the cases of Libyan political prisoners, as well, to make sure that the U.S.-Libyan detente does not come at the expense of human rights.