Accessibility links
Tracing A Father's Steps On China's Long March Red Army soldiers trekked through China on their epic journey nearly 75 years ago. The daughter of an officer, Diane Zhang, follows the route on a quest to learn about the defining moment in her family's and China's history. 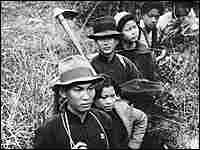 Pictured here are some of the 8,000 survivors of the Long March made by Communist leader Mao Tse-Tung and his followers. Three Lions/Getty Images hide caption 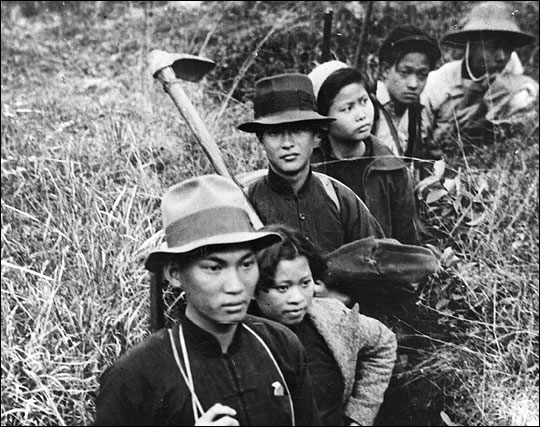 Pictured here are some of the 8,000 survivors of the Long March made by Communist leader Mao Tse-Tung and his followers. 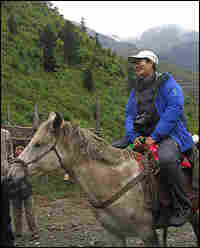 Diane Zhang travels along the same route that her father traveled nearly 75 years ago. Elizabeth Arnold for NPR hide caption 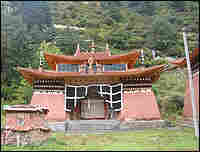 Many monasteries dot the 6,000-mile path of the Long March. A historian at one monastery says monks fled when they heard Red Army soldiers were coming. Elizabeth Arnold for NPR hide caption

It's been nearly 75 years since the Long March, the epic trek by Red Army soldiers that gave birth to the new People's Republic of China.

But even as communism fades with the rise of capitalism, China is still wrestling with its past. The resilience and self-sacrifice of hundreds of thousands of marchers has long been considered legend.

Diane Zhang, the daughter of a Red Army officer, recently completed her own long march in an effort to understand her deceased father and the history of the march, which began in 1934.

A steady stream of brightly colored buses lumbers up and around the steep terraces above the Min River. Loaded down with tourists in search of pandas, they narrowly miss old women in faded Mao jackets swatting yaks by the roadside.

The superhighway was once a dirt path traveled by hundreds of thousands of Red Army soldiers fleeing the Nationalist armies of Chiang Kai-shek. They were ill-equipped and outnumbered.

For generations, the Long March has been a symbol of national character.

Zhang was taught as a young girl that those who marched were martyrs.

"In school they made it, you know, a very heroic [journey]. It's like only God can do it," she recalls. "You never thought, you know, your dad, somebody you know."

Zhang's father was an officer in the Third Red Army Corps and one of the few who survived the entire 6,000-mile trek. Zhang still struggles to make sense of it.

"You know, my generation was brought up in Cultural Revolution. We don't give a damn to the older generation — you're liars; you painted a perfect world but look at what the reality is [that] you gave us," she says.

Her father was later jailed during the chaos of the Cultural Revolution, and Zhang couldn't understand her father's loyalty to the party.

It wasn't until she went on her own long march, where she talked to people and farmers along the trail, that she could understand the commitment of her father, who came from a rich family and dropped out of college to join the revolution.

"It was shocking to me," Zhang says. "It's sort of like finding yourself, [your] identity."

Through her father's diaries and letters over the last few years, Zhang has pieced together his journey in order to retrace his footsteps.

But her own march hasn't been easy.

The route spans thousands of miles, six major ethnic regions, snowy peaks and bamboo forests. And much of it has changed.

On the Tibetan Plateau, Zhang tries to cross the great grassland south of the Yellow River, an area known for the sheer number of soldiers who died of starvation. Any trace of the Long March, though, has given way to capitalism.

Grass has been overgrazed by yaks. The road is under construction, and the road crew and herders block access — demanding money for passage.

A few hours and many miles later, Zhang is more welcome in the tiny farming village of Xinmin. There, she discovers a Long March survivor, Yin Jinxue.

He's in a cramped, fly-infested room, surrounded by relatives. He wears a threadbare Red Army uniform, cinched by a wide leather belt. He pulls the jacket away from his thin frame to reveal a scar.

"Oh, this bone was broken by the bullets," Yin says.

Yin is 94, and it seems painful for him to even open his eyes. He is strangely animated by Zhang's questions about when he joined, who he fought with and where he went.

He tells Zhang that it was not the fighting but the hunger that was so hard. While crossing the grassland, they tried to eat their belts.

"[We] boil the water and put a leather band in it," Yin recalls. "And boil it until it is soft and cut into small pieces — just chewing it."

It's a story Zhang has heard before from others. She patiently spends several hours with this man. When she leaves, Yin's relatives embrace her. It's a scene that repeats itself throughout the journey.

While the Long March was a military retreat, it was also a massive propaganda tour. It was the character of the marchers that won new followers to the party. Mao's soldiers were told not to harm the peasants, not to confiscate food and to treat minorities as equals.

Zhang visited dozens of monasteries. At one in Chogee, local historian Jiang Gway Hwah says the monks ran away when the Red Army first arrived.

"She believes they were afraid. They heard from the Nationalists [that] the Red Army was the devil," Zhang says, translating Jiang's account. "And so they ran away, and they also found that the Red Army took all their crops, but they also discovered when they came back that the Red Army left money for food and stuff."

It was a winning strategy for the party, an effective recruitment tool.

Zhang has learned to be both tolerant and persuasive on her journey. Traveling by jeep on a leg of the trip, she's stopped by landslides almost daily. At one point, there are two landslides, and the driver says the road is impassible. A huge rock with smaller rocks surrounding it almost blocks the entire road.

Zhang insists on getting through. Using the only possible means of transportation — a mule — she crosses Lazikou Pass, the site of a high cliff battle between the Nationalists and the Red Army.

It has taken years and hundreds of interviews for Zhang to retrace a march that took her father 384 days to complete.

Zhang comes closer to fully understanding her father's cause when she reaches the historic village of Hadapu, a landmark in Long March history.

Hadapu is a bustling city where Mao and other top commanders finally broke the Red Army out of the mountains, grasslands and the Tibetan regions. They were greeted with cheers and food.

It was in Hadapu where Mao learned from a newspaper that there was a Communist force just 250 miles to the north. They would join it and turn retreat into victory, marching into Beijing in 1949, an event as significant to China as the Civil War is to America.

Hadapu has high hopes for what some call "Red tourism." The city is an oasis of history, a town solely dedicated to the memory of the march. There are monuments, plaques, even a store that sells Long March sandals.

At the heart of Hadapu is a small museum, with portraits of Mao and other top commanders. Smiling students sing Long March songs from a television screen in the corner. The museum is run by historian Han Erming, an animated scholar. Zhang, exhausted from weeks of traveling, just wants a better map.

But Han has something for Zhang that she's least expecting: a photograph and a scroll with beautiful Chinese characters on it. He says it's a photo of her father, and she describes what the Chinese says.

"[It says] something like, they experienced all the hardship during the march and the only thing they will never forget is the family feeling of the people they met on the road who helped," Zhang says.

On a simple scroll, Zhang Aiping wrote exactly what his own daughter has only recently discovered — through her own journey and meeting people along the historical route.

Marxist ideology is no longer the heart of today's China, and controversial new histories try to separate myth from fact. But Zhang believes the epic march that shaped communism still lives on in its people.