Accessibility links
'True Blood,' Tasty New TV From Alan Ball And HBO The new HBO series centers on a vampire clan living in a small Louisiana town. It's by Alan Ball, creator of the hit series Six Feet Under, and based on a series of novels by Charlaine Harris. Anna Paquin stars. 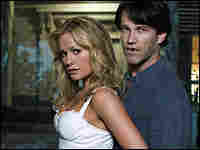 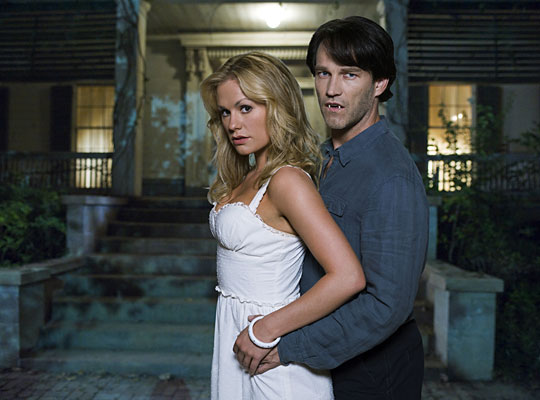 Ever since The Sopranos cut to black, HBO has been searching for the next big thing.

The show that replaced it, John from Cincinnati, sure wasn't it. Not only was that David Milch series a big disappointment, but its appearance meant the disappearance of Milch's Deadwood — the HBO series that, at the time, was the best drama on television.

Showtime, meanwhile, captured lots of attention — and deserved every drop of it — with Dexter, its creepy, funny, bloody drama about a serial killer who kills other serial killers.

So it makes sense that HBO, which was in need of a creative transfusion anyway, went with its own creepy, funny, bloody drama series — and went back to one of its successful producers, Alan Ball, who spent years on Six Feet Under surrounded by death and the dead.

In True Blood, which premieres Sept. 7, he's surrounded by death and the un-dead. Adapted from a series of novels by Charlaine Harris, True Blood is set in a small Louisiana town — small enough to be near both bayous and run-down plantation mansions. It's based on the premise that vampires, two years earlier, finally admitted they were real, not myth, and started to mainstream into regular society. They "came out of the coffin," as one character describes it, because of the invention of a synthetic blood that could sustain vampires, so they no longer had to drink human or animal blood.

They can even go into bars and diners and order some — which is just what one vampire does in the opening episode of True Blood. His name is Bill, he's played by Stephen Moyer, and he's served by Sookie, a charming young waitress played by Anna Paquin.

Sookie has her own secrets and hidden strengths; she's telepathic, for one thing. But Sookie can't hear Bill's thoughts at all — so when he enters Sam's Diner, she knows he's different. And she's not scared. She's fascinated, and as excited as a preteen girl meeting a Jonas Brother.

If you were a fan of Buffy the Vampire Slayer, and I hope you were, you're already familiar with the idea of mixing terror and humor in a vampire story. Buffy was better, and actually a lot more subtle, but True Blood approaches things differently.

Buffy, like a David Lynch drama, was about finding darkness hidden in the sunniest of places — it was set, after all, in Sunnydale. And more than anything else, Buffy was about the epic, endless struggle between good and evil.

True Blood has other things on its mind. It's big on allegory, and the tension about accepting vampires into society is an obvious play on civil rights in general, and gay rights in particular. (Sometimes too obvious, but it's interesting anyway.)

Even better is the idea that just as vampires can feed on humans, certain humans in True Blood like to feed on vampires: They either seek them out as exciting, dangerous sexual partners or synthesize vampire blood as a potent new black-market drug.

So while some outlaw vampires continue to hunt humans, there are some outlaw humans hunting vampires. Others, like Sookie and Bill, just want to get along.

But what chance do you have to love one another "till death do you part," when loving a vampire means it's death at the start?

True Blood explores that question, and others, in a show that builds slowly but surely. Stay with it for a few episodes, and you'll be craving your weekly dose of True Blood.

It's not going to replace The Sopranos — but as a synthetic substitute, it'll do for now.