Accessibility links
Gangster Reveals Mexican Mafia Secrets Rene Enriquez was once a leader in the Mexican mafia. He killed for the gang and ordered the deaths of many men and women. But after reaching the pinnacle of prison-gang life, he decided to leave and share information with the police.

This is part one of a two-part report. 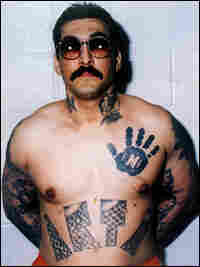 Rene Enriquez's most prominent tattoo is a black hand on his chest, a symbol of the Mexican mafia. Courtesy of Rene Enriquez hide caption 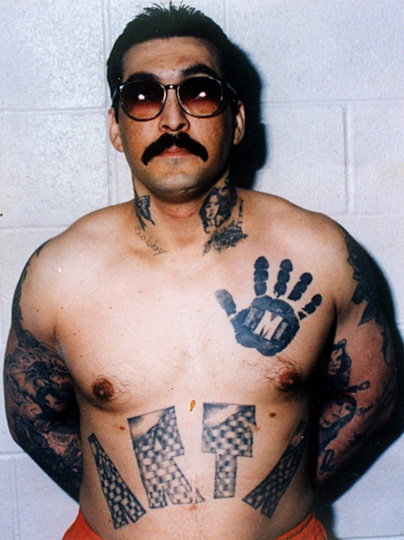 Rene Enriquez's most prominent tattoo is a black hand on his chest, a symbol of the Mexican mafia.

Rene Enriquez's meetings with officials were videotaped. He explains to police the organizational structure of the Mexican mafia, how inmates circumvent security measures in prison visiting rooms, and how money is laundered. Watch the video. 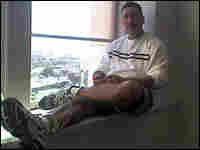 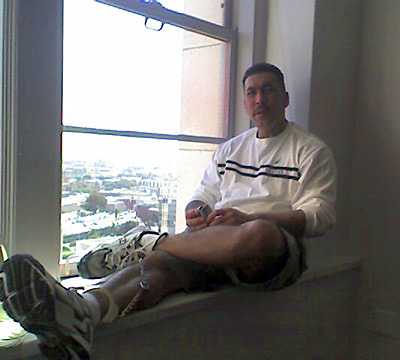 Enriquez, in leg irons, waiting for a 2007 meeting with law enforcement agents.

The life of a high-level mobster is a staple of books and Hollywood films. But most real-life gang leaders don't tell their stories. The code of silence runs deep; breaking that code can be fatal. That's especially true if the mobster is behind bars.

But one former leader of the Mexican mafia — a violent group formed in California's prisons — did just that.

Rene Enriquez, nicknamed Boxer, who once killed for the gang and also ordered the deaths of men and women in prison and on the streets of Los Angeles, ended up opening his life to the police and sharing many of the organization's secrets.

When he decided to defect in 2002, Enriquez became the highest-level Mexican mafia leader to work with the cops.

In the unlikely event you encountered Enriquez on the street, you'd meet a polite man with a tinge of cockiness — perhaps that of a high-powered business executive or professional athlete.

But if you met up with Enriquez, say, on the beach, with his shirt off, you'd have a very different impression. Carved on his body are menacing tattoos that that tell a life story of mayhem and murder.

His most prominent tattoo is a black hand on his chest, a symbol of the Mexican mafia. "We call it the black hand of death," he says.

"I believe I'm a cut above the rest. As a mafioso, you have to be an elitist. You have an elitist, arrogant mentality," he says. "That's how you carry yourself in the Mexican mafia. That's how you project yourself."

Enriquez has been involved in organized crime for 20 years and was a Mexican mafia member for over 17 years.

'Destined To Get There'

Enriquez is currently behind bars, serving two life sentences for murder. And California prisons are where Enriquez fought his way to the top of the Mexican mafia, a group that rallies Latino gang members from the southern part of the state.

But in 2002, he had a change of heart: Enriquez quit the Mexican mafia and agreed to cooperate with authorities. He told his story to prison investigators in videotaped interviews.

"For the first time, we had a Mexican mafia member defect that was really able to lay out for us how the organization works, the organizational structure," says Robert Marquez, a special agent with the California Department of Corrections and Rehabilitation.

Enriquez's information was a bonanza. But what really intrigued investigators was his unusual profile. Enriquez grew up in a middle-class home in places like Thousand Oaks and Sunset Hills in California. He showed early promise in school. But instead of following his father into business, Enriquez channeled his ambitions into the local street gang.

"And once we got into the gangs, we understood that the homeboys that got out of prison were well respected. You go there, and you learn prison," Enriquez says. "We wanted to get to prison somehow. And we were destined to get there."

While serving time for armed robbery, Enriquez started carrying out assaults for Mexican mafia leaders in San Quentin and Folsom prisons. The mafia had deep roots in the California prison system, having been formed there in the 1950s.

Enriquez learned the art of making homemade knives and hiding them in his rectum. He carried out assaults for the Mexican mafia on other inmates. Then, after he was paroled, Enriquez used his connection with Mexican mafia leaders in prison to extort drug dealers on the streets, where the cocaine and crack trade was booming.

Chris Blatchford, a Los Angeles television reporter who has written a book about Enriquez, says the former Mexican mafia leader was more ruthless than other crooks.

When a drug dealer refused to pay up, Enriquez retaliated. He was sentenced to two life terms for killing the man, and in 1993, the state sent him to Pelican Bay State Prison on California's remote north coast.

Because he was a prison gang member, Enriquez was locked in a windowless isolation cell in the Security Housing Unit, or SHU. There inmates spend 24 hours a day alone without seeing the outside world, except on television.

Many years later, Enriquez started capturing his life story on audiotapes he recorded off the cuff for family and friends. He says he got the idea from a movie.

In one tape, Enriquez describes his arrival to the SHU.

"What impacts me immediately as soon as I walk in, is the smell. I just stepped outside from the bus and you smell the pines, the redwoods, the forest ... these earthy, loamy smells. But as soon as you step into the SHU, it hits you like a wave. It's the smell of despair, depression, desperation. This is a place where people come to die."

Pelican Bay was designed to break the gangs. But locked down in isolation, Enriquez and his cohort remained defiant. They concocted simple but effective communication networks. They passed messages through visitors and legal mail — mail that guards aren't allowed to read. They taught themselves exotic dialects and American Sign Language to fool prison staff. And they thrived in a culture of impunity.

A secret to Enriquez's success was his transforming punishing isolation into a sort of sanctuary. Rival gangs couldn't get to him, and most cops and prosecutors thought their job was already done. After all, Enriquez was serving two life sentences. The prison couldn't do much more to punish him. But lifers have time to think and scheme.

Enriquez remembers participating in something called "the thousand concepts" at Pelican Bay.

"We'd spin off a thousand ideas. And if only one of them was profitable, we were succeeding. So we'd do this every day up in Pelican Bay, a thousand miles from our base of power, spinning off ideas that paid money," he says.

Marquez, who was Pelican Bay's chief gang investigator, says Enriquez "had a level of sophistication in conducting his business that it was almost impossible to pinpoint and nail down exactly, everything that he was doing,"

Enriquez treated the street drug dealers like owners of a fast-food franchise. They could use the Mexican mafia name in return for part of their profits, and they were intimidated into paying.

"A street gang southern Hispanic, or a sureno, knows that if he's engaged in a criminal activity on the streets, at some point he's going to go to jail, or going to go to prison," Marquez says. "Because the Mexican mafia has such influence within the prisons and the jails, that street gang member knows, 'If I don't do what I'm told to do on the streets, that when I hit the jail, or when I hit the prisons, there are those who are so loyal to the Mexican mafia that they're going to assault me.' "

Perhaps Enriquez's greatest achievement was in helping extend the Mexican mafia's brand to dozens of L.A. street gangs. And he did this through an elaborate subterfuge

In the mid-1990s, the group put out calls to stop drive-by shootings among L.A. Latinos. But Enriquez says the aim wasn't peace.

"Our true motivation for stopping the drive-bys was to infiltrate the street gangs and place representatives in each gang, representatives which then, in turn, tax illicit activities in the areas," he says.

He says the Mexican mafia wanted to channel the random shootings into a form of violence it could control, for profit.

"And we already had it planned out that California would be carved up ... into slices, with each member receiving an organizational turf," he says.

The Mexican mafia's campaign against drive-by shootings had another benefit: good PR. "They saw that as a way into being more respectable, in the eyes of sympathetic do-gooders, city leaders, church leaders," author Blatchford says.

And for the most part, Enriquez says, it worked.

"Tens of thousands of gang members adhered to what we said. Us. High school dropouts," he says. "But we had such authority behind who we were, they listened."

It was then, he says, they realized the true potential of the Mexican mafia: Astronomical amounts of money could be made without ever having to touch drugs or do anything again themselves.

"We could do all this; we could become a true powerhouse, because of the finances generated by taxation: taxation, extortion, protection," Enriquez says.

Drug profits flowed to prison. Drug dealers on the street sent checks and money orders to gang leaders behind bars, under the noses of California prison staff. Enriquez and his associates socked away tens of thousands of dollars. He invested in bank CDs and government bonds. The accounts were only frozen after he defected.

But success fueled greed and paranoia. Violent feuds erupted among Mexican mafia members. Some started plotting to kill the families of rivals in the gang.

"This arbitrary targeting of families — because I am your adversary — takes it to a whole different realm of violence. This was not part of the bargain. This is not the Mexican mafia that I joined," he says.

Enriquez grew disillusioned. And he was being ground down — by a heroin addiction and prison isolation.

"I remember the first time I had an anxiety attack. I felt like I was going to die, impending doom," he says. "That was the first sign I had that something was going wrong with me, that it was time for me to get out of this."

Enriquez was a mobster facing a midlife crisis.

"In Rene's case, he had accomplished everything that he wanted to accomplish as far as being a Mexican mafia member. However, I think in his case, he finally saw that, 'Hey, you know what? I've reached the pinnacle of everything that I'm doing here, and yet at the same time, I'm still locked up. And is this the rest of my life? Being in this concrete cell, this concrete unit, and is this how I'm going to end my life?' " Marquez says.

"Everybody goes through it," he says.

In 2002, Enriquez left the Mexican mafia. His defection put him on the gang's hit list, but it also opened a new universe.

After leaving the prison isolation unit, Enriquez saw the night sky — the moon and stars — for the first time in 10 years.

Today he says has many regrets. But as he looks back, he still marvels at how a group of high school dropouts managed to turn the criminal justice system upside down.

"I was rather proud of being a Mexican mafia member. I did things in the organization that some people had never done," he says. "We pushed this towards being a financial success. We started thinking about intellectual progress, business progress, the infiltration of society."

Those days are in the past, says Enriquez. He has a new life now — one in which his former enemies, the cops, are his protectors, and even his friends.