Accessibility links
Massive Particle Accelerator Revving Up This summer, physicists plan to turn on a 16-mile-long particle accelerator. It will smash together subatomic particles at incredible force. Physicist Alvaro De Rujula's $8 billion project may be the largest science experiment in history.

The first of a two-part series. 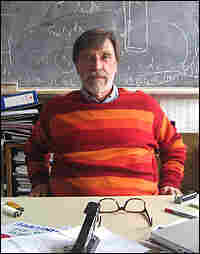 Alvaro De Rujula is a physicist at CERN, the world's largest particle physics laboratory. Three hundred feet below his desk, workers are building a massive particle accelerator that will be capable of reproducing energies present just after the big bang. David Kestenbaum, NPR hide caption 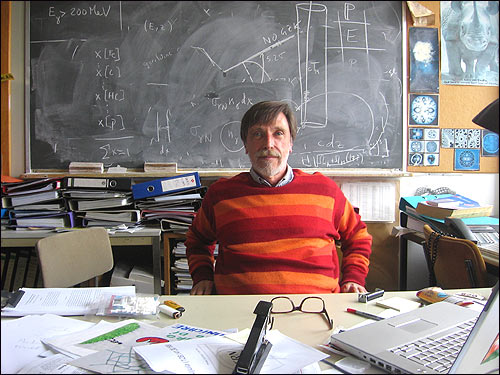 Alvaro De Rujula is a physicist at CERN, the world's largest particle physics laboratory. Three hundred feet below his desk, workers are building a massive particle accelerator that will be capable of reproducing energies present just after the big bang.

Hear Part 2 of This Report: 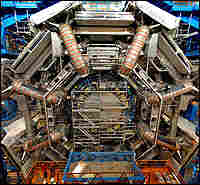 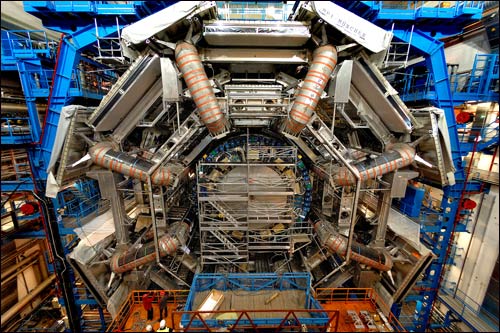 The gargantuan ATLAS particle detector is seven stories tall. Physicists hope to use it to answer fundamental questions about mass, "dark matter" and perhaps even discover extra dimensions to space-time.

Physicist Alvaro De Rujula Talks About Mathematical Elegance, God and the Simplicity of the Natural World 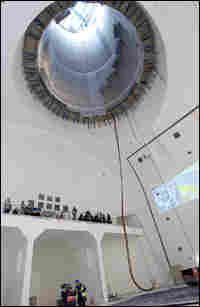 The empty, underground cavern before construction of one of the giant detectors. CERN hide caption 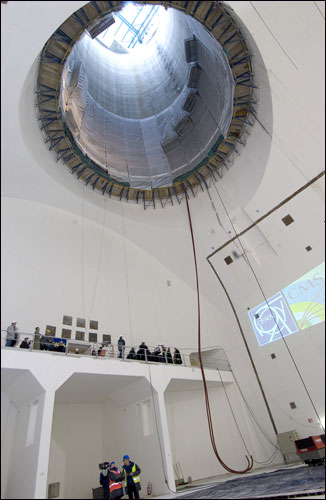 The empty, underground cavern before construction of one of the giant detectors.

See Part of a Giant Detector Being Lowered Underground

This fall, physicists plan to throw the switch on what is arguably the largest and most complex science experiment ever conducted. An underground ring of superconducting magnets, reaching from Switzerland into France, will smash together subatomic particles at incredible force.

Physicists say they're not sure what will emerge from those collisions. They're hunting a mysterious, hypothetical particle called the Higgs boson. It is also possible they will make miniature black holes, or discover new dimensions of space-time.

Alvaro De Rujula is a staff scientist and theoretical physicist at CERN — which stands for Conseil Europeen pour la Recherche Nucleaire, or the European Council for Nuclear Research.

De Rujula is smoking in his messy office. He looks like he may have just stepped out of another dimension — one filled with dry-witted, articulate scientists who roll their own cigarettes and wear bright-striped sweaters and purple pants.

De Rujula has a kind of weary humor. Perhaps because the field of particle physics, the pursuit of deep subatomic truths, has been in a rut for three decades.

"Particle physics, which is my business, has been quiet for a long time," De Rujula says, "because we [were] too successful in the 1970s, when a thing called the standard model was invented."

The standard model is arguably one of the crowning achievements of modern science. It is a theory of almost everything, that is, it's an equation that explains with remarkable precision how particles interact at the smallest levels: the foundation of atoms, of chemistry, of biology, of existence.

"We have never found any deviation from these models, so we've been right for 30 years... It's sort of boring," De Rujula says as he lights another cigarette.

Beyond the Standard Model

De Rujula thinks there has to be more than the standard model. It has internal contradictions and it leaves some big, nearly philosophical questions unanswered. For example, why do things weigh what they weigh? What is the "dark matter" that astronomers see tugging on galaxies?

The answers could come from just outside De Rujula's window. Three hundred feet underground, workers are installing superconducting magnets in a long tunnel. They are building a new, powerful particle accelerator capable of reproducing energies present just after the big bang.

The first accelerator like this was just 12 inches around. The one under De Rujula's office is 16 miles. It has the understated name of the "Large Hadron Collider."

"Physics is an experimental science," De Rujula says, "and we learn by doing experiments and seeing how nature behaves."

The magnets form a racetrack of sorts, for particles called protons. Protons are nothing special — they're inside every atom. But when this machine is running, the protons will race around at nearly the speed of light. All together, the protons in the machine will carry the energy of just under 200 pounds of TNT.

"Nothing comes to the surface," De Rujula says. "That's why the Swiss milk continues to be so good. The cows don't care."

'The Energy Density is Gigantic'

Actually, the bus analogy is only half of the story. There will be bunches of protons moving clockwise and another set moving counterclockwise. Magnets steer them, so the infinitesimal particles smash into each other, packing the energy of two buses colliding into a tiny speck of space.

From that speck, almost anything can emerge; that's Einstein's E=mc2. Energy can be transformed into matter.

Theorists have all sorts of ideas for what might materialize. De Rujula says the machine will probe what he calls "the vacuum of space."

"Now that sounds very peculiar," he concedes, "but the vacuum, surprisingly, is not empty. There is a difference between vacuum and nothingness... Take a room and take everything out, and take the light out, and people out, and air out. When you think it is truly, truly empty... it isn't empty. It can still contain a substance, which is the vacuum, which is not entirely empty in some sense."

One of the things left in the vacuum is thought to be something called the Higgs field, named after physicist Peter Higgs. The Higgs field would be a kind of omnipresent stickiness that grabs onto everything, making stuff hard to move. This is what we call mass.

Einstein explained gravity. But he didn't explain why things have mass in the first place.

"We think that the masses of particles are a sort of friction with the vacuum," De Rujula says. "They do not travel freely with the vacuum, but [rather] interact with it in some way."

Associated with this Higgs field would be Higgs particles, which could be produced by the collisions in the accelerator. One physicist has called the Higgs particle the "God Particle."

He says black holes would certainly be interesting, because they would be evidence for extra tiny dimensions of space-time. But he doesn't think they are likely to appear. And if they do, they'll be harmless.

"Those black holes will not be dangerous ones of science fiction that eat up everything," De Rujula promises. "Being so small they sort of break into pieces."

Less of a long shot is the idea that the collisions will produce things like the "dark matter" particles that physicists are confident they see affecting the motion of galaxies. They have seen the effects of dark matter, but they have never known what the particles actually are.

It is also possible that this $8 billion project will find nothing, or nearly nothing. Derujula says this would actually be the most interesting outcome.

"That would tell us we really haven't understood anything about the vacuum," he says. "Although that is the most interesting possibility. Suppose we don't find it and don't find anything else. How do we explain that not finding anything is the best possible thing? It would be very difficult."

Or at least very politically difficult. If nothing is found, who knows? This could be the last large particle accelerator ever built. It is scheduled to officially begin operation in November.

Ooops, even the great minds make mistakes. This story stated that each proton in the accelerator carries the energy of a bus. This is wrong. But added together all the protons in the machine will carry the equivalent energy of a 10-ton bus moving at 170 mph. Likewise the energy of the protons is not equivalent, as stated, to kilotons of TNT, but to some 360 pounds of TNT. Also, the machine is currently scheduled to begin operation in November.