Accessibility links
U.N. Climate Report Predicts Droughts, Flooding The U.N. scientific panel is stark in its depiction of what's in store for the planet: flooding, droughts and extinctions. And the scientists warn the world's poor will be hit hardest. 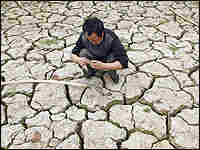 A farmer fixes water pipes used to pump water from a reservoir into fields in the outskirts of Shanquan township, in China's southwestern province of Sichuan, March 2007. A drought in southwestern China has left 5.5 million people short of drinking water and resulted in millions of dollars in damages. A U.N. report warns that climate change will make dry regions even drier. Liu Jin/AFP/Getty Images hide caption

Your Questions on Climate Change

Starting May 1, NPR, in partnership with National Geographic, will take you on a year-long global voyage, exploring how the Earth's climate shapes people, and how people are shaping the Earth's climate. We'll follow the prime meridian and international date line — the meridians that circle the Earth at 0 and 180 degrees longitude — stopping along the way to see how changes in climate are affecting lives, landscapes and societies.

But first, we want to know your questions on climate change.

Send us your questions.

After five days of debate and an all-night, down-to-the-wire battle, scientists and government officials from around the world agreed Friday to a new report outlining the effects of global warming on the planet.

The Intergovernmental Panel on Climate Change, a United Nations scientific group, released its findings Friday in Brussels, Belgium. Although haggling over the fine print diluted some of the original language, the final report is stark in its depiction of what's in store for the planet: flooding, droughts, extinctions of plants and animals, and high costs for everyone.

This is the fourth report from the U.N. climate panel in 17 years, and it has proved to be one of the hardest-hitting ones. The first chapter came out in February after tough negotiations. It said that scientists are more than 90 percent sure that humans are warming the planet.

In the latest report, the panel addressed the impacts of global warming, and what their assessment turned up is troubling: Many coastal communities will flood. Severe droughts will damage crops, and there will be stronger storms, hurricanes and heat waves. Many coral reefs will die, and many of the world's plants and animals will be at higher risk of extinction.

But scientists who wrote the report wanted to say they had "very high confidence" in their findings. That means they think they have a nine out of 10 chance of being right. That started a fight, according to Patricia Romero Lankao, one of the scientific authors, who works at the National Center for Atmospheric Research in Boulder, Colo.

"Some countries, like China and Saudi Arabia, didn't want to accept our statement that it was very likely that global warming was causing those impacts on physical and biological systems," Lankao said.

China is expected to pass the United States as the leading emitter of greenhouse gases that warm the planet. Saudi Arabia owns the largest reserves of oil. Officials representing China and Saudi Arabia won that fight, striking the word "very" and reducing certainty to eight out of 10.

Lankao says European scientists also wanted to stress how seriously the economies of poor nations in particular would be damaged, and how little they actually contributed to warming compared to industrialized countries. Lankao says the U.S. delegation sought to tone down that language.

Despite the compromises, the final document makes it clear that big impacts are on the way, and that the world is already changing.

"Examples are earlier melting of lake ice in the Great Lakes and later freezing; plants, flowers blooming sooner; the migratory patterns of birds changing — mostly distinctly through the second half of the 20th century," says climate scientist Linda Mearns, also from the atmospheric center in Colorado, who contributed to the study.

"The real heart of the climate change issue is now shifting more from the climate science, the physical science, and more into the impacts, and then also issues of mitigation, about how we reduce greenhouse gases," she said.

The IPCC report isn't all dire news. Some temperate regions, such as North America, will see longer growing seasons for crops, for example. But effects will differ regionally. In a study published this week in the journal Science, climate researcher Richard Seager at Columbia University says the southwestern United States could see the kind of long-term drought that caused the Dust Bowl of the 1930s.

"The overall pattern, if you were going to distill it down to something very simple, is that the drier regions get drier and the wet regions get wetter," Seager said.

Many of the hardest-hit regions are where the poor live — in Africa and in many other parts of the tropics. But climate scientist Mearns says wealthy countries such as the United States shouldn't think they'll escape.

"Poor populations within a country will probably suffer more," Mearns said. "And of course, one can take the example of Katrina — and the people who suffered most there were the poorer residents."

There's more to come from the U.N. panel. They'll report in May on what kinds of things can be done to lessen the impacts of climate change.