Accessibility links
Ex-Mexican Mafia Head Now Lives Under The Radar What's it like for a prison-gang leader when he decides to drop out? For Rene Enriquez, who is serving two life sentences in California, cooperating with police has its perks — like video games and a razor for shaving. But it also means he leads a secret life. 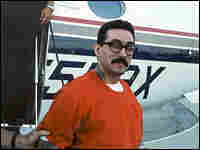 Enriquez is escorted by FBI agents in 2003 following his defection from the Mexican mafia. Courtesy of Rene Enriquez hide caption 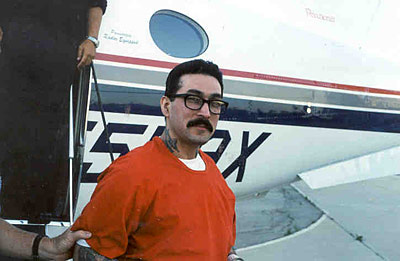 Enriquez is escorted by FBI agents in 2003 following his defection from the Mexican mafia.

Rene Enriquez's meetings with officials were videotaped. He explains to police the organizational structure of the Mexican mafia, how inmates circumvent security measures in prison visiting rooms, and how money is laundered. Watch the video. 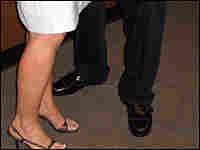 At the peak of his power, Rene Enriquez could order murders and conjure elaborate drug deals from an 8-by-10 cell in one of the country's highest-security prisons. He was a leader in the Mexican mafia, a violent group based in California prisons that exerts powerful influence on the streets. Then Enriquez defected.

Enriquez is serving two 20-to-life sentences for murder. We agreed not to reveal the location where Enriquez is being held.

"It's kind of like we're buried. We're subterranean," Enriquez says.

Enriquez was transferred here several years ago from state prison after dropping out of the Mexican mafia, a powerful criminal gang active in more than a dozen states. In 2002, after having been a Mexican mafia member for over 17 years, he joined the ranks of convicted criminals who agree to provide information against their former peers. Cooperating with the government has its perks — like video games and a razor to shave with. But it means living a secret life.

For his security, Enriquez now depends on his former enemies in law enforcement, agents like Jeff Bosket.

"Almost everyone I work with always says you have to be careful. This guy is a huge mafioso," Bosket says. "He's killed people."

As Enriquez's chief handler, Bosket coordinates assignments with various law enforcement agencies, and he acts informally as a sort of guardian, counselor and therapist rolled into one.

"When I first learned about Rene, they said he had been passed through numerous law enforcement agencies. Numerous cops had worked with him, extracted information from him and basically done what Rene calls the 'hump and dump' — take the information and leave him and don't give him anything," Bosket says.

Enriquez is using his insider's knowledge of the Mexican mafia to help several large investigations into surging gang violence in the L.A. area. He decodes gang members' conversations from surveillance tapes and identifies suspects in photographs.

Convicted criminals like Enriquez who cooperate often do so in the hope that it will improve their chances for freedom. But it's a vexing path. For one, law enforcement agents and prosecutors are limited in what, if anything, they can offer in exchange for information.

"We have this strange and very strained negotiation about 'I have to trust you as a bad guy and you have to trust me as a law enforcement person,' which goes against both of our whole personas. But we have to establish some kind of trust there," Valdemar says.

Trusting the cops is only one of Enriquez's challenges. As a gang turncoat, he struggles with the stigma of being branded a snitch. And he has to resist daily temptations like drugs, which seem to be everywhere. Enriquez has already had one major backslide. Soon after dropping out, he was back on heroin and dealing drugs with other gang dropouts in state prison.

Enriquez eventually got clean. But, he says, he faces other issues: He struggles with his new status as a "regular Joe."

Specifically, as a former mob leader, he finds it frustrating to stay silent when other prisoners get on his nerves.

"You want to react. It's almost a daily temptation to want to roar up or have it your way, or, you know, be that guy again," he says. "It's hard for me. Whereas before, these small slights, they would be dealt with immediately. Boom. Without hesitation. Now, an individual that is on the tier that is drunk and pops off at the mouth, I look at them [and] in the back of my head I think, 'I could hurt this guy.' "

Working with the cops can bring benefits beyond a more comfortable cell. On occasion, agents pull favors for their informants.

One morning Enriquez put on a suit and tie for the first time since his murder trial 18 years ago. Then, heavily armed U.S. Marshals put cuffs and chains on Enriquez and drove him to a federal building.

Enriquez was getting married to an old friend. He reconnected with her after his transfer to the L.A. jail.

Marrying the two was Father Gregory Boyle. Boyle is a prominent Catholic priest in Los Angeles. Years ago, Enriquez tried to con Boyle. Now the two talk about the power of redemption through good works.

"I believe so strongly in the sense of somebody redeeming themselves," Boyle says.

Enriquez's wife asked that we not use her name out of safety concerns. But she told us she believes her husband has changed and expects to share a life with him outside prison. They see each other several times a week, but they aren't allowed conjugal visits.

Enriquez credits his long talks with his wife for changing the way he sees things.

In his diary, he recalls that she got angry when he referred to a person he killed, another gang member, as a "nobody." The people he was convicted of killing were sons, fathers, mothers, daughters, friends, brothers and sisters, she said, and she told him he had no right to take those people away from those who cared about them.

"And it really struck me. There's nothing that I could say that can diminish my responsibility for what happened. I'm aware of what I did. I wish that I could take it back a thousand times over," he says.

Enriquez tries not to look back and instead focuses on his new life. His credibility with the government has grown. He sees more of the outside world now, though he's always in chains.

"I have a currency that nobody has. I have knowledge about the Mexican mafia that the public's never heard. They've never heard it expressed the way I can express it. I lived it," he says.

Three years after he started working for the government, Enriquez finally faced the challenge every gang witness dreads: testifying in open court. The case was a large federal trial of Mexican mafia associates in San Diego. Detective Bosket says Enriquez entered the courtroom wearing a prison jumpsuit, but he carried himself like a business executive.

Bosket says the jurors weren't afraid of Enriquez, but they were disturbed by the brutal world he described. All seven defendants were found guilty. They were sentenced earlier this year to life terms in federal prison.

Enriquez says his work against the Mexican mafia has damaged the group, though not fatally.

A host of law enforcement officers say Enriquez should be rewarded for his efforts. Valdemar, the retired sheriff's sergeant, is one of Enriquez's supporters.

"When he became disillusioned with that organization, we [were] obliged to do everything we can to help him come out of that. That can only help us in society in general. And he shouldn't be punished for that. He should be rewarded for that," Valdemar says.

But should that reward be freedom?

Frank Johnson, who prosecuted Enriquez for murder years ago, isn't sure.

He's now a judge. Johnson still remembers how the grandfather of one of Enríquez's murder victims came to court every day.

Every man is more than the worst thing he's ever done, Enriquez says.

"There has to be something more than the worst thing you've ever done; that doesn't define every person," he says. "I think really I'm a man in his nascency. I'm learning how to become a man again, because I've never really learned that aspect of life. I've always been incarcerated."

From his jail cell, Enriquez engages in an almost daily mental exercise. He weighs his past deeds — his murders, assaults and drug dealing — against his prospects for the future. He says his work for the government has boosted his hopes. But he concedes his chances for release are slim.

He points to a file full of laudatory documents. The praise comes from the highest levels of the Department of Corrections and from law enforcement agencies.

"But this is one little file. Consider the sheer volume of documents that are adverse. Consider my whole life in the Mexican mafia. This only tips the scale a little bit," he says. "The weight of my other file, my criminal file, is so huge that this is nothing here. This is nothing. These are just pages."

Enriquez is still cooperating with several law enforcement agencies from a secret location in southern California. When that work is done, Enriquez's handlers say he might get transferred to federal prison. It's safer there, and he could stand a better chance for release. He continues to tell his story to juries. And a 300-page biography of Enriquez is due out this fall.