Accessibility links
Baldness Pattern: A New Cold War Analysis : Krulwich Wonders... For much of the 20th century, Russian (and Soviet) leaders with full heads of hair shared the country's top political spot with bald men. In fact, they very nearly went back and forth -- something their American rivals did not come close to doing. 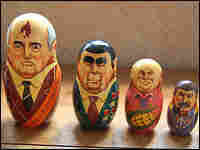 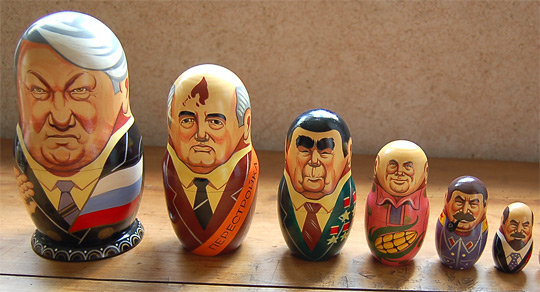 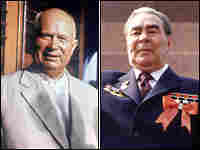 For much of the 20th century, Russian (and Soviet) leaders with full heads of hair shared the country's top political spot with bald men. In fact, they very nearly went back and forth -- something their American rivals did not come close to doing.

For that insight, we credit Steve Jones, head of the Biology Department at University College, London. He was wasting time one day, presumably staring at photos of Russian leaders (don't ask) and he noticed a pattern.

When the Communists took over in Russia in 1917, the first leader, Vladimir Lenin, was bald. His successor, Joseph Stalin, was hairy.

Special thanks to Manoli Wetherell for helping design this story and to Josh Rogosin for helping create our duet. He's the other Russian baritone, though he's an American, and yes, a tenor.

To sum up: baldies hand off to hairies in perfect Russian synchrony. It could be a song (In fact, it now is: Click the audio link above to hear Jones' observations as a duet, accompanied by Russian musicians).

But not only does our story have rhythm, it has punch: Half of Russia's recent leaders have been bald, or nearly so.

Compare that to our own list of U.S. bald leaders: We have Ike. We have Gerry Ford. If the lighting is bad, we could slip in Warren Harding. Its not an impressive record. We have what in Cold War days might have been called "A Baldness Gap" -- and the Russians are winning.

Which is surprising, considering that 2008 was a year that featured all kinds of demographic breakthroughs: Women candidates, black candidates, a Mormon, a Jew and a 72-year-old all sought the top job.

But the only semi-bald man seeking the nation's highest office, Sen. Joe Biden, got himself un-balded. (He hasn't spoken about it, but clearly he is less bald than he used to be; people on the Web love to compare "before" and "after" pictures of Biden).

Apparently, says Jones, American voters now welcome all kinds of different-looking candidates -- but they still won't embrace a bald man (since this is a testosterone condition, women generally don't go bald). Alas, we have a "Baldness Barrier."

Unless, that is, libertarian-leaning candidate (and losing-it-in-front) Ron Paul suddenly becomes a front-runner.