Accessibility links
Boeing Machinists Reject Offer, Strike Picket lines went up early Saturday at Boeing airplane factories. As many as 27,000 machinists are on strike. With many airlines desperate to update their fleets, Boeing can ill-afford a protracted walkout. 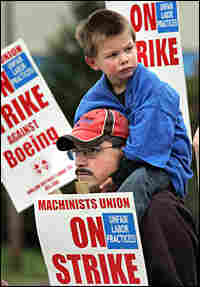 Boeing was apparently blindsided by the rejection of its offer, one that the company calls outstanding. It contained, among other things, an 11 percent wage hike over three years, increased money for pensions and thousands of dollars in bonuses.

But workers say the company could give more.

"We've been giving back so long. It hasn't been for the union workers, it's been for the company, so it's our time," says machinist Charles Fromong. "We can reap the rewards, the benefits of what we have worked so hard for. But the company don't care. They don't care about that."

Boeing can ill-afford a protracted walkout. Production of the company's new 787 jet is more than a year behind schedule.

"It's true that a protracted strike could put at risk our ability to fly the 787 in the 4th quarter as we promised, but I can't give you a day-for-day kind of read on what's gonna happen," Boeing spokesman Tim Healy said Friday. "Obviously, a longer strike is going to have a bigger impact."