Accessibility links
Haiti Is Struck By Hanna, Drenched By Ike In Haiti, relief efforts continue almost a week after Tropical Storm Hanna caused extensive flooding on the island. The town of Gonaives was the hardest hit; scores of people were killed and much of the city remains under water. Aid workers are desperately trying to provide food, shelter and medicine to people there while fearing more flooding from Hurricane Ike.

In Haiti, relief efforts continue almost a week after Tropical Storm Hanna caused extensive flooding on the island. The town of Gonaives was the hardest hit; scores of people were killed and much of the city remains under water. Aid workers are desperately trying to provide food, shelter and medicine to people there while fearing more flooding from Hurricane Ike. 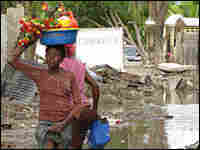 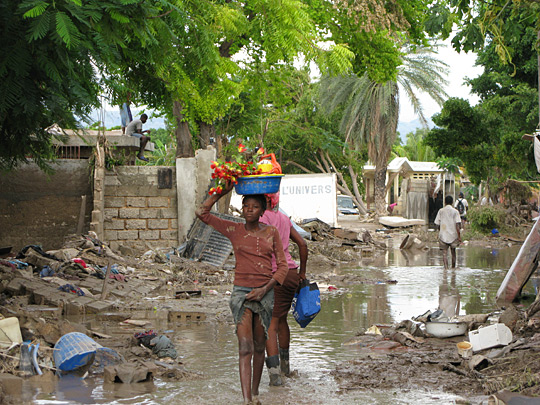 Residents of Gonaives, Haiti, attempt to clean up from Tropical Storm Hanna on Saturday. Later that night, Hurricane Ike reflooded the area.

Hurricane Ike hit the Turks and Caicos Islands just before dawn this morning. The storm has reached category four proportions with winds blowing at speeds up to 135 miles per hour. Ike appears headed for the Gulf of Mexico. And the governors of Florida and Louisiana are gearing up for a possible hit. James Franklin with the National Hurricane Center spoke to the Associated Press.

Mr. JAMES FRANKLIN (Hurricane Specialist, National Hurricane Center): Ike is a very dangerous category four hurricane. It's moving through the southeastern Bahamas. It's right now headed for Great Inagua Island. And after that, eastern Cuba is in the path of this very, very dangerous hurricane.

HANSEN: And in Haiti, relief efforts continue almost a week after Tropical Storm Hanna caused extensive flooding on the island. The town of Gonaives was hardest hit. Much of the city remains under water. NPR's Jason Beaubien is in Gonaives and filed this report.

JASON BEAUBIEN: The roads in and out of Gonaives were cut off by landslides and floods. The U.N. is moving in tons of food, water, and relief supplies primarily by helicopter. And the basic infrastructure of this city of 300,000 people has been destroyed.

BEAUBIEN: At the Rabacal(ph) Hospital on the eastern edge of Gonaives, a seven-year-old boy alternates between sobbing and wailing in pain. His father says a cement wall collapsed and broke the boy's hand. Three physicians from Medicins Sans Frontieres, four Cuban doctors, and one Haitian are the only trained medical staff in this hospital.

BEAUBIEN: Kadai Kerdu, the administrator of this facility, says his is one of only two medical clinics in Gonaives that are still functioning. And, he says, he's running out of supplies.

BEAUBIEN: We can't get fuel for our generator, he says. We only have enough to last tomorrow and the next day. Kerdu also says they're running low on medicine. Gonaives was always a poor place in the poorest country in the hemisphere. Now the streets of this impoverished port city are also filled with muddy water, abandoned cars, and every type of debris imaginable. A teddy bear floats by, an old TV set, a bloated corpse of a pig. A week after Tropical Storm Hanna pounded this part of Haiti, residents here slog through water up to their waist to get back and forth to what's left of their homes. Eberon Just(ph) is walking against the current with a single glass bottle of water about the size of a large apple juice jug on his shoulder. He says it's the only possession he has left.

BEAUBIEN: Tropical Storm Hanna didn't kill me, he says. But now I worry that I'll die of hunger. Several shelters have been set up. Some people are crowded into an elementary school. The local bishop has several hundred people staying on the grounds of his residence. But most people are sleeping on their roofs or out in the open. Just, along with a long line of other residents, was heading to the slopes of an adjacent mountain to spend the night on higher ground.

BEAUBIEN: With the outer bands of Hurricane Ike threatening to dump even more water on this waterlogged city, many residents were preparing to sleep out in the open. The fortunate ones have tarps. Many people have nothing.

BEAUBIEN: Marie Magdal Josef is one of 24 people making preparations to sleep on an exposed, second-storey roof. She points to an open space across the street that's now just a puddle. She says that's where her house used to be.

BEAUBIEN: It's a friend who's let us stay here for a few days, she says. The two dozen residents on the roof range in age from eight months to 75 years. Anger rising in her voice, Josef says she's not angry.

BEAUBIEN: I'm not angry, she says. I'm hungry, and I don't have any clothes or shoes to wear. Josef says all she can do now is wait on the roof, wait for the water to finally drain out of the city, wait for the government or the U.N. or somebody to help her rebuild her house. Jason Beaubien, NPR News, Gonaives, Haiti.

HANSEN: To find out how the online community mobilizes during this hurricane season, check out a posting by NPR's social media guru, Andy Carvin, at npr.org/soapbox. You're listening to NPR News.