Accessibility links
J.J. Abrams, Life On The 'Fringe' Lost creator J.J. Abrams discusses his latest television show, Fringe. The show, which Abrams describes as having a "a slight 'Twilight Zone' vibe," focuses on the unnatural occurrences in the world of a brilliant but mentally-unstable research scientist. 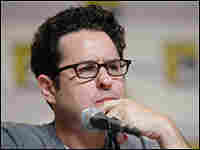 Abrams is the co-creator, writer, executive producer and director of the hit TV show Lost. He also created and wrote the show Alias.

"The influences were enormous, and all those shows, you know the night stalker and those movies relied heavily on the look and the sound. Even the Kronenberg films, you know, the early ones may not have been as obviously stylized like the cell for example," Abrams says, commenting on Fringe. "The fact is, the visuals were the things that landed often, you know, scanners, the guy's head exploding, the things he would do that were so insane - you know, videodrome he would have characters reaching in to their bodies and pulling out VHS tapes - it was ridiculous."