Accessibility links
Billboards Serve As Reminders Of Death In Baghdad Though violence is markedly down in Iraq, potent reminders of the ongoing struggle are clearly visible. Some residents have put up billboards honoring relatives who have died in the war, which also act as a reminder to the government.

Listen
Billboards Serve As Reminders Of Death In Baghdad 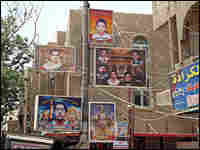 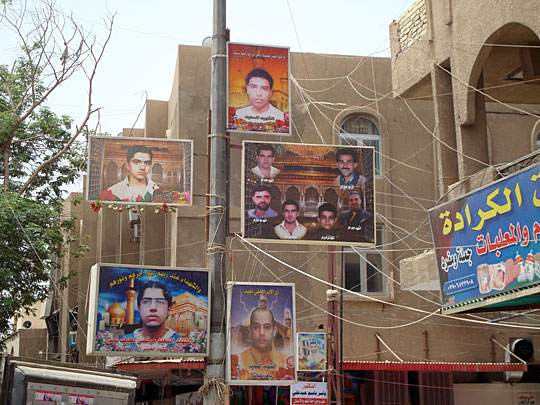 Billboards with pictures of lost loved ones hang on electricity poles in Baghdad's Karrada neighborhood.

In Iraq, people are living in greater security than they have in years. But the constant talk in America of "calm in Iraq" and "victory within sight" dismays Iraqis who knew the hundreds of people who continue to die each month.

Some have started to commemorate the dead with billboards that are springing up along the streets of the capital.

Tarik Shaker Hamoudi has not heard the relentless commentary echoing across America this election year; he has not heard that the U.S. troop surge single-handedly brought calm to Baghdad and that America is "within sight of victory in Iraq." He has been too busy relearning how to walk after an explosion last year in this same spot killed his brother and left him with two badly damaged legs.

Water drips from a charred and broken pipe across the street from Hamoudi's small roadside shop in Baghdad's Mansour neighborhood. A stocky man in his late 50s, Hamoudi hobbles on two metal canes to approximately where he was standing Friday night when a suicide bomber rammed his vehicle into a passing convoy belonging to Iraqi politician Ahmed Chalabi.

"I fell down inside my shop, and I heard my two friends — they were wounded and crying for help," Hamoudi says. "I said, 'I can't help you.' When I got up, I was going crazy. I saw people laying everywhere."

It was another failed attempt to assassinate Chalabi, the former exile responsible for much of the flawed intelligence used by the Bush administration to press for the invasion of Iraq.

The large car bomb tore viciously through the neighborhood, splattering bits of hair and flesh on the roof across the street where 83-year-old Samira was trying to sleep in the brutal summer heat. Things may be better for some Iraqis, she says, but not for her.

"The security situation is bad — the explosions are still happening," Samira says. "Two months ago, a bomb exploded and all my windows were broken. And now this latest explosion has basically destroyed my house."

Billboards For The Dead

Viewed from a distance, there is no question that Iraq is a less violent place in 2008 than it has been in years. Figures compiled by Iraq's interior ministry show the Iraqi death toll falling from thousands each month in 2006 to hundreds each month this year. In July and August, the totals were just over 100 fatalities per month, and as always, the vast majority of those were civilians.

But in today's Baghdad, reminders of death are everywhere. Traditionally, Iraqi families hung cloth banners announcing the names of their dead. But lately, billboards have appeared, large and small, complete with names, photos, date of death and sometimes a phrase from the Quran.

"The strangest order I got was a billboard for 18 martyrs, all from the same family," A'araji says. "They all died on the same day — a mother, her daughters and sons — in one attack. I guess I should say it is not really strange, but a painful thing."

Lately the billboards have begun to feature not just the newly killed, but some of those who perished in earlier carnage, before the Bush administration committed five additional brigades to Iraq.

Ali Hamid, 35, knows that some Iraqis are uncomfortable with the billboard featuring his five family members who died, along with more than 100 others, in a rocket and car bomb attack that cause buildings to collapse in the Karrada neighborhood in late July 2006.

Hamid doesn't need the billboard to remind him to honor their memory, but he thinks his government does.

"The main reason to put up this billboard is to remind our officials that we voted you into power, and what have we gained? We're still burying our children," Hamid says. "We hope our leaders ask themselves: 'Why did this young man die? Why was this little girl killed?' They protect themselves in the Green Zone and leave us to die every day."

As September opened in Anbar province — a region hailed as a model for turning the country around — four Iraqi policemen were attacked at a checkpoint outside Fallujah. Two were kidnapped, and two were killed on the spot, their heads lopped off, al-Qaida-style.