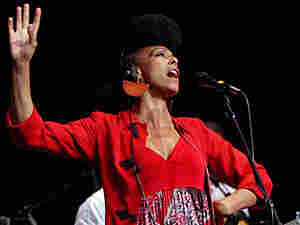 Lead singer and founder Marie Dualne was born to an African mother and Belgian father in the Congo, and raised in French-speaking Belgium. Her family was harbored by pygmies in the Congolese forest in the midst of revolution. Though Zap Mama began as a female a cappella quintet, the group has matured and molded its sound into the multicultural melting pot that it is today. Led by Dualne's voice, the band features turntables and background vocals in addition to keyboards, bass, guitar and drums.

This set features live performances of songs from Zap Mama's latest CD, Supermoon, but it opens with a reworking of "Bandy Bandy," from the group's previous record, Ancestry in Progress.