Accessibility links
Snapping Salmon: A Biologist's Underwater Passion Mary Edwards is a fish biologist who loves salmon — especially if they're running upriver. But her true passion is to take portrait-style photos of fish underwater, in the remote rivers of the Pacific Northwest. 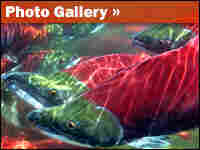 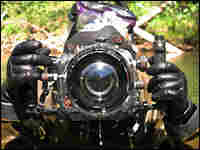 With camera at the ready, Mary Edwards is set to capture images of salmon and trout — and reporters. Ketzel Levine/NPR hide caption 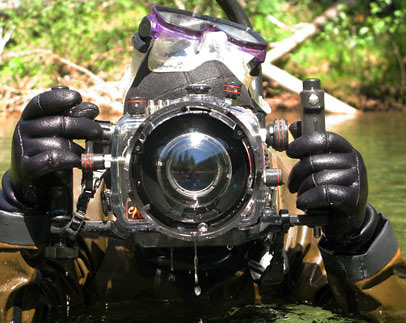 With camera at the ready, Mary Edwards is set to capture images of salmon and trout — and reporters. 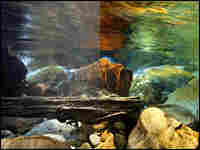 A split-screen shows the manipulations Edwards uses to optimize the scenes she captures. The full version is in the photo gallery. Mary Edwards hide caption 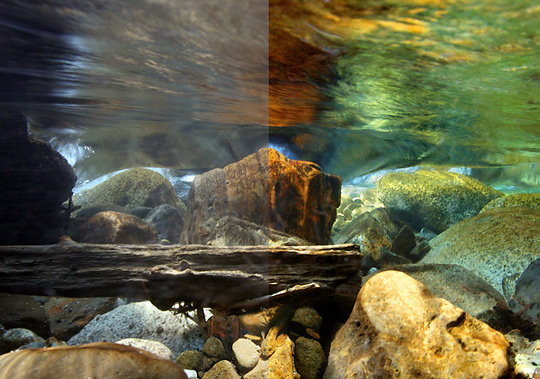 A split-screen shows the manipulations Edwards uses to optimize the scenes she captures. The full version is in the photo gallery.

Mary Edwards is a fish biologist who loves salmon — especially if they're alive and swimming. She has studied their anatomy, life cycle and courtship rituals; even their afterlife as nutrients for trees.

But Edwards' greatest passion is to take portrait-style photos of fish underwater, in the remote rivers and lakes of the Pacific Northwest.

I catch up with Edwards in eastern Oregon, near her home in out-of-the-way Joseph, where she works for the Nez Perce fisheries as a research biologist. This being migration season, she's agreed to take me fishing — for pictures, that is.

Suiting Up For The Water

We spend an eternity getting into dry suits, loading up gear and driving to one of her favorite haunts, the even more remote Lostine River.

Once there, we waddle through brush as Edwards yells, "Hey Bear! Hey Bear!"

I listen to the rhythm, but I'm deaf to the meaning of her words.

The sun skips along the water as we reach shore and wade in, anticipating the first breathless moment of the day. Edwards lowers her camera into the rushing river and prays its waterproof casing holds.

"That's 3,000 bucks," she says, as we watch the camera casing for signs of dreaded bubbles. "And we look good!"

I'll say. We're in a quintessential pinch-me-I'm-dreaming landscape, with a cinematic river running through it. It's a magical setting for the alchemy about to take place, as a research biologist sheds all professional detachment and loses herself in cold-water wonder.

"OK," she says, spitting water from her snorkel and adjusting her mask. "I'm going in."

The current's pretty swift and wants to take her body downriver. But Edwards anchors her feet against a large rock. She floats quite still for a while, then emerges.

"Young salmon. We call them parr," she says. "Big school, little fish. I want to see if there are larger fish around the bend."

Hunting For 'The Moment'

As we head upstream, Edwards talks about her work as a photographer. After eight years shooting underwater, she can spot a tiny fish camouflaged against a rock, or maintain her cool completely swarmed by thousands of fish. That won't happen here, but it does still happen in Alaska, when the sockeye salmon run.

Later, when she looks at the day's photographs on her computer, she will tinker with the truth a bit. She'll exaggerate minute details, saturate colors, and push her real-world photos to watercolor-like extremes.

"Some images are just perfect the way they are," she says. "But often I want to change them, maybe accent an energy that's there."

Suddenly, Edwards lights up and points across the narrow river. "There's a redd!" she says — "a clearing in the pebbles where salmon spawn."

That's why we're here now, during these few late summer weeks when salmon complete their journey, in this case traveling from an ocean 650 miles away to the very gravel where they were born.

All I can see are two pieces of flotsam. But then one of them suddenly flips to its side and starts wriggling sideways in the river gravel.

"That's digging," she explains. "They're working up to what I love to call 'the moment'. That's when she'll actually let her eggs out and he'll express milt, or sperm, at the same time."

Edwards won't be photographing "the moment"; she will never risk interfering. We decide to leave the couple in peace and settle into what looks to be a promising pool.

Within minutes of submerging, Edwards pops back up again, smiling.

"There's a big male chinook hanging out underneath that log," she says. "He's probably 3 feet long, 4 years old. He looks pretty beat up, probably been fighting with other males. Towards the end of spawn, salmon do look terrible."

Edwards descends again to get more shots, and as I stand there with my microphone waiting for an update, I take my first good look at the mountains and wilderness around us. And I remember her calling, "Hey bear! Hey bear!"

Then it hits me: Oh man, we're in bear country during happy hour! What's with that?

Edwards resurfaces, beaming, and I have my answer: Passion. Risk. Reward.

Later, at home, Edwards will subtly manipulate the image of liquid light streaming through a big old chinook's ragged tail. She'll tweak the exposure, play with the black, punch minute details. It's a workmanlike process that belies her own awe during a day on the river, watching the beat-up bodies of near-death salmon coming home to spawn.

"All my science background says that spawning is governed by lots of things," Edwards says.

"But if I could take one-tenth of that determination and apply it to my life, what would I accomplish! What would we all accomplish?"