Accessibility links
Frightened Rabbit: Clouds On A Cloudy Day Frightened Rabbit's lyrical themes of heartbreak, disease, death and suicide might seem overbearing, but as evident in this session from KEXP, there's a cathartic quality to the band's songs. Frontman Scott Hutchinson also talks about the band's reflective side. 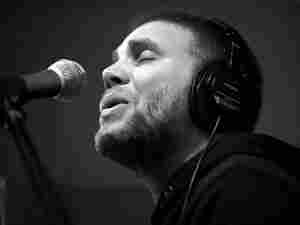 It may have been summer, but the skies were gray and filled with rain on the day Frightened Rabbit came to visit the KEXP studios. I figured it might have made this Scottish band feel more at home. It provided a perfect setting for the introspective, moody material from the group's second album, The Midnight Organ Fight. I love everything about this new release — the music, the lyrics, the emotion, everything. On paper, the songs' subject matter (heartbreak, disease, addiction, depression, death and suicide) might seem overbearing, but there's a cathartic quality to the songs, a sense of release and transcendence that gives the music a sense of hope. Great songs do that, and The Midnight Organ Fight is filled with them.

Obviously, emotional honesty isn't an issue for frontman Scott Hutchinson. Maybe it was the weather, but the band seemed to feel relaxed and at home. Hutchinson not only burped during the interview, but also felt comfortable enough to talk about the more personal aspects of his lyrics, including those of the song "Floating in the Forth," wherein the narrator contemplates suicide. But it wasn't all death and despair. While their songs tackle dark themes, in person the band was playful and a delight to hang out with, as you'll hear in this performance.

The next day, the sun finally came out in Seattle. Perhaps the power of this in-studio performance helped blast away the clouds and bring some sunlight and levity to the city.