Accessibility links
Reflecting On A Search For America's Leaders During a two-week road trip, three NPR staffers traveled from Chicago to Phoenix in search of people who rallied their communities. From a diner owner in Chicago to an Arkansas fiddler, those who emerged as local leaders came from all walks of life.

Reflecting On A Search For America's Leaders

Reflecting On A Search For America's Leaders

They took the trip because, as McCain and Obama accepted their parties' nominations, there was much talk about presidential leadership. But leadership doesn't just live in the White House. There are leaders in every city and town, in every school and business, and in every family.

And along the way, listeners and readers sent in suggestions that led NPR to people such as a fire chief in Illinois, and a dentist and county coroner in a 700-person town called Walsh, Colo. 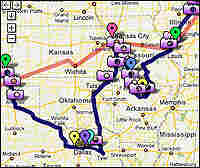 Check out NPR's blogging of the trip -- including this map that outlines the final route and extra photos.

While politicians attended the two major parties' conventions, NPR set out on a different kind of adventure: a cross-country road trip to discover who people admired in their own communities and who they considered to be their leaders.

The trip began in Chicago, the hometown of Democratic nominee Barack Obama, and ended in Phoenix, the city where Republican nominee John McCain lives.

Along the way, NPR met a wide swath of people, such as Izola White, who runs a soul food diner on Chicago's South Side. Although the restaurant is a famous gathering spot for the city's movers and shakers, customers say it has also become a stabilizing force in an otherwise rough neighborhood.

Along the Mississippi River in Alton, Ill., Greg Bock is a fire chief who oversees the safety of the 30,000-resident town. His job isn't always easy, given the budget cuts to his department and the tasks of managing other people who often are risking their lives.

From the owner of a reptile ranch in Santo, Texas, to the town dentist in Walsh, Colo., called upon to fill many other roles — county coroner, fire chief, city councilman — the people we met came from all walks of life.

In the small Ozarks town of Mountain View, Ark., which works hard to preserve its folk music tradition, resident Glenn Morrison offered this succinct thought for what makes a leader: Someone people can trust.

Produced by Thomas Pierce, with photography by David Gilkey

Watch a video of NPR's road trip from Chicago to Phoenix.