Accessibility links
Horse Sense: New Breed Of Executive Training The Horse Institute helps managers learn about teamwork, creativity and communication by watching and performing exercises with horses. Companies that provide such "equine-assisted learning" say because horses are so good at reflecting human behavior, they can help teach people something about themselves. 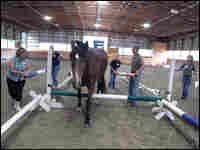 Family Farm Insurance employees work as a team to get a horse to go over a bar. Doug DeMarco hide caption 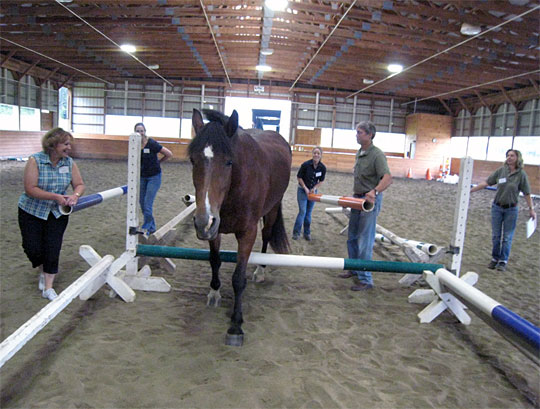 Family Farm Insurance employees work as a team to get a horse to go over a bar. 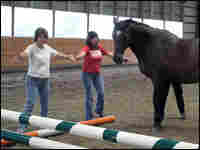 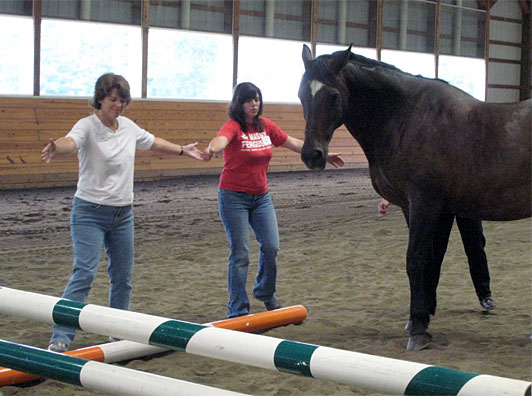 Businesses are always looking for ways to get better results from their employees. Now a company in upstate New York is offering a decidedly different take on worker motivation.

The company's founders say working with horses is a great way to learn teamwork, creativity and better communication.

On a recent morning, six employees of the Farm Family Insurance Co. entered a giant indoor arena on the company's 28-acre complex in Ancramdale, N.Y. Two horses canter around the fence; another rolls around on its back playfully. The women are told they have to make one of the horses jump over a bar, but they can't touch the horse. It's not what you'd call an easy task, and they aren't exactly experienced horsewomen.

"So, you guys think we should all stay together?" says one of the participants.

"We could join hands and corral the horse. We could do something like that, without touching the horse, guiding the horse that way? Wouldn't that scare the horse or not?"

The first team walks after the horse, trying to lure it toward the bar.

Another team lines up poles on the ground, forming a kind of chute to guide the horse. This gets the horse up to the bar, but it just won't jump. It's too high.

Then, one of the women suggests just lowering the bar. There's no rule against it, and the horse quickly steps over it.

The exercise is aimed at getting people to think about how they solve problems and not assume there's a right or wrong way to tackle a task.

It's a lesson with a lot of application in the workplace, says Marie-Claude Stockl. She and her husband, Larry, are refugees from the corporate world. The couple started the Horse Institute four years ago.

"I wanted to marry my two passions," Stockl says, "which is training people and also working with horses."

The Horse Institute's customers have included a car dealership, hospitals and schools. A one-day session runs at least $7,500. That may seem like a questionable use of corporate dollars, but the Stockls insist that horses make excellent teachers.

These consultants believe horses can help companies assess new hires or decide whether an employee is in the right job.

The reason has to do with the way horses interact with humans.

Today, the women are told to pick a horse and place a halter on it. The horses stare at the women blankly, and then trot off to the middle of the arena. The women trail after them. Finally, after several tries, they get the halters on.

Marie-Claude Stockl gathers the women in a circle. She tells them horses respond to cues, spoken or otherwise.

The horses sense if you don't know what you're doing, and they react accordingly.

"They mirror you; the horses mirror your intentions, which is fascinating," Stockl says.

"Because these horses we observe with every group, they always have a different behavior. They are you at this point."

The horses ran away, she says, because the women hadn't thought through how to handle the task before they started.

Jan Monks, the head insurance agent, says the exercise has made her think about the way she manages people — how she has to be clear about what she wants.

It's something she confesses is not always easy to do.

"It was surprising ... this whole exercise has made me stop and analyze myself and things that I do in business."

Companies that use equine-assisted learning say horses are so good at reflecting human behavior, because they can help teach people something about themselves. And that, they say, can be a useful tool for understanding the workplace.